A Wiggly Recap with LOTS of photos

Get ready for a Wiggly picture display from the concert we went to the other night. As I was looking at the photos and debating which ones to put onto Flickr I checked out the ones from last year. It was at that point that I realized we saw them exactly a year before this . . . October 23, 2006.

Since I was dragging my feet on how to do this blog entry I finally made a decision.I opted to try a new Flickr Toy that I found thanks to Bethany Actually using it in a Swaparooni post. I had a blast combining photos into fun mosaics so I could put a bunch of photos into a smaller space. So here is the concert in picture form. Feel free to click on them to see them on Flickr where I will be adding more notes to them explaining things. Plus the larger sized versions of each individual photo are also there in my Wiggles Concert 2007 set of photos.

Now hang onto your seats and remember. . . if you happen to have front row seats Wiggles sweat flying your way when they dance and jump around is something that WILL happen (especially with Ben and Sam).

Here’s NHL the night before the concert when he was done making a bone for Wags. We also brought a rose for Dorothy. Later we all noticed that NHL had placed a Big Red Car onto his creation and never knew he had done it. 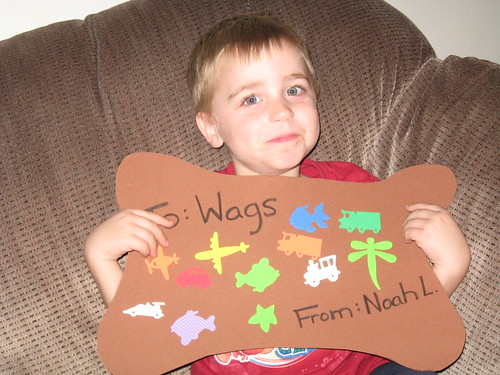 This is NHL looking at everything on the stage before the concert. Note he’s holding the Henry the Octopus that we bought for him since he was so cute about wanting it. Yup, we were suckers! Please excuse my boob which also happened to jump into the shot. 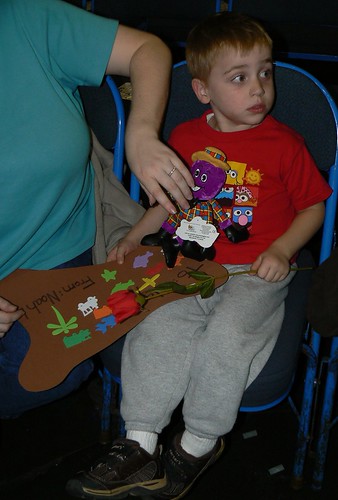 Here’s a mosaic of the stage before the show and when the Wiggly Dancer came one. The center shot of the Big Red Car was taken at the end when Sam drove it on for a few minutes before the concert was over. 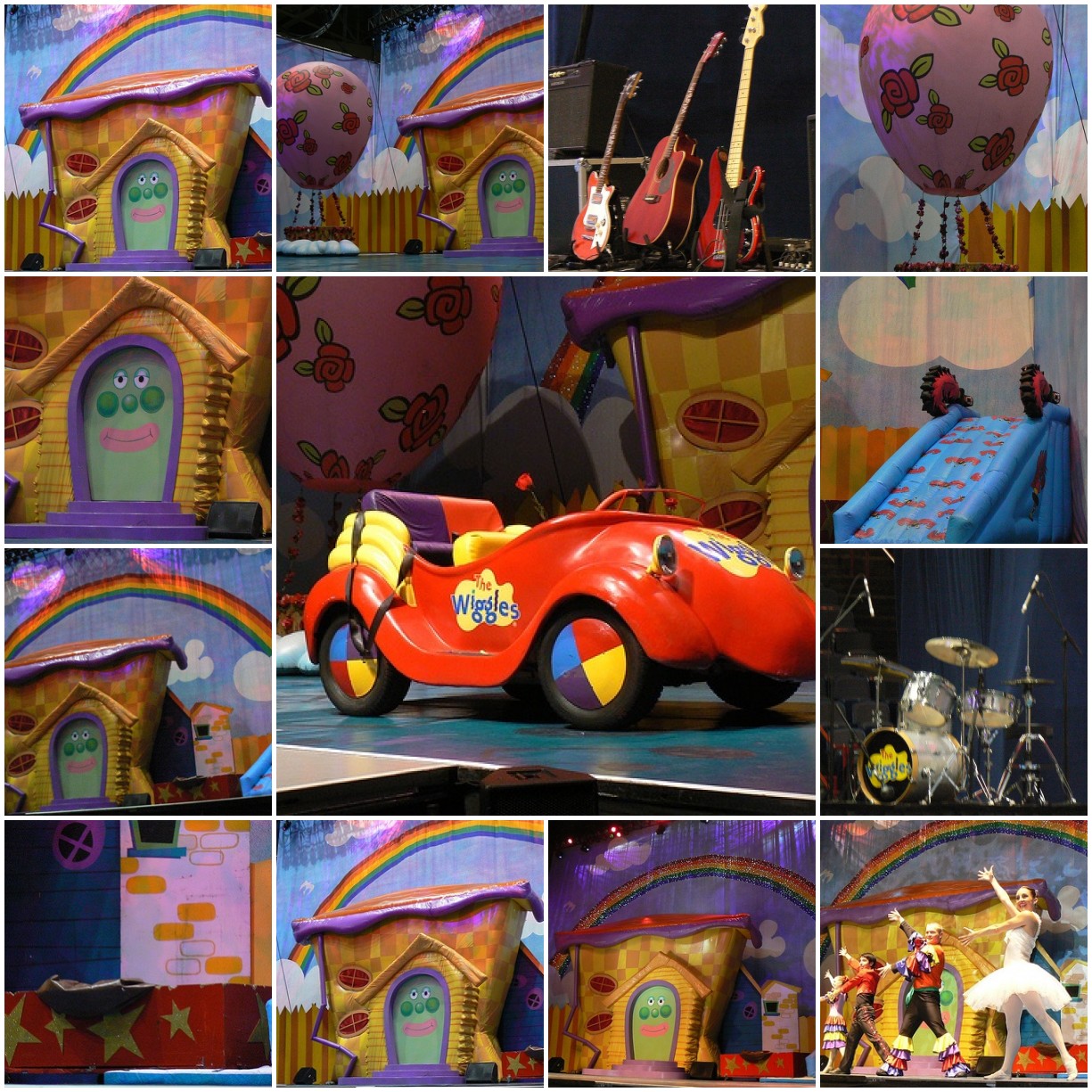 Here’s the newest Wiggle, Sam. He was SO much better this year. His voice was stronger and he really seemed to be enjoying his time on stage. He was so great waving to kids, reading signs in the audience, and even posing for a photo. Yes, he actually posed for JL to take a photo. The second photo on the right was the one JL took. 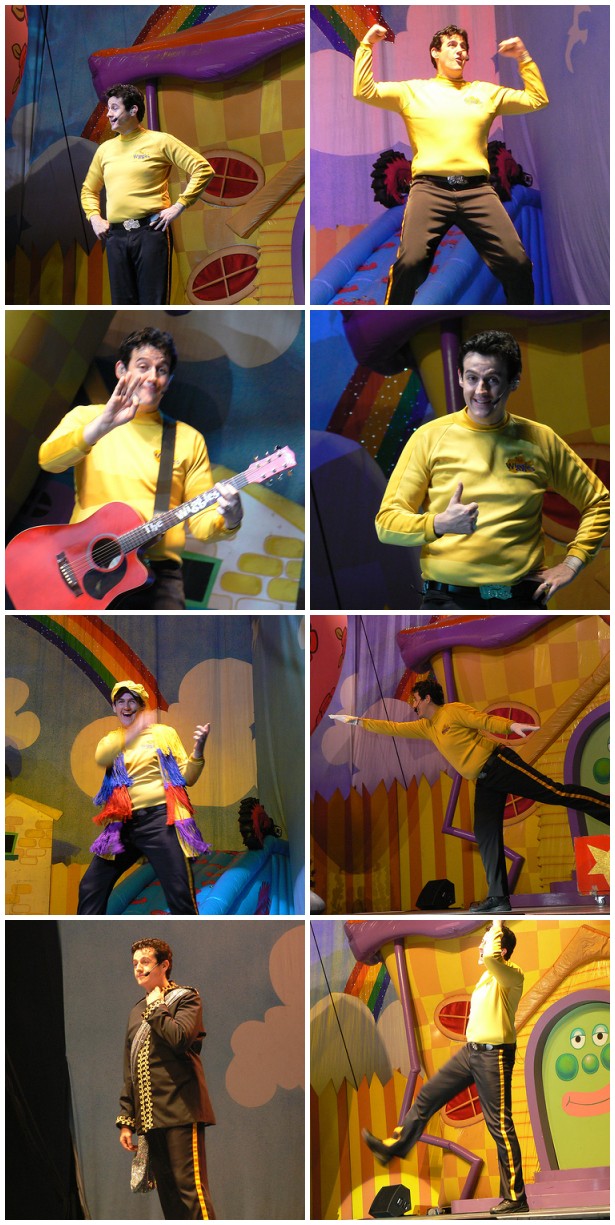 Next up is Anthony, the ring-master of sorts. Anthony does an amazing job keeping the adults in the audience laughing. He has a great time on stage with Captain Feathersword and Ben (Wiggly Dancer). He truly is a clown and joy to watch.

Now it’s time to play the Guitar with Murray, the red Wiggle. Murray was in front of us most of the evening since his guitar stand was on our side of the stage. NHL waved to him several time and he waved back. Here’s our photo tribute to Murray. 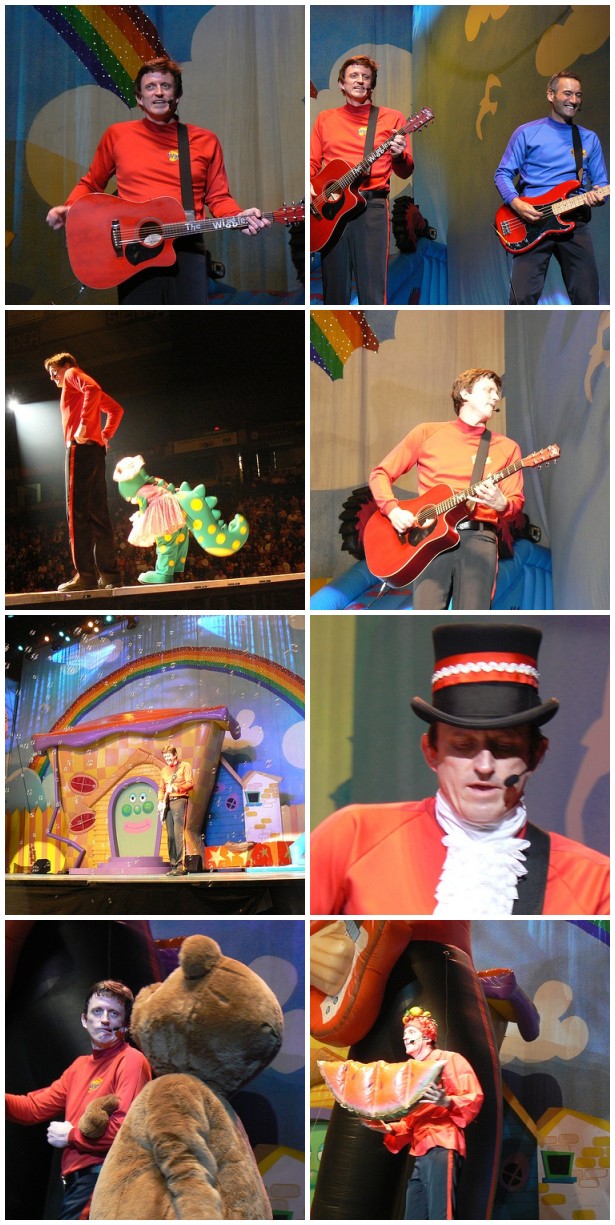 And last but not lease is the purple Wiggle –> WAKE UP JEFF!!! Those of you would be pleasantly surprised to find out that we only had to wake Jeff up twice. Here are the photos JL took of Jeff. There will be more about Jeff momentarily and what he did to Murray (well – the Murray balloon really). 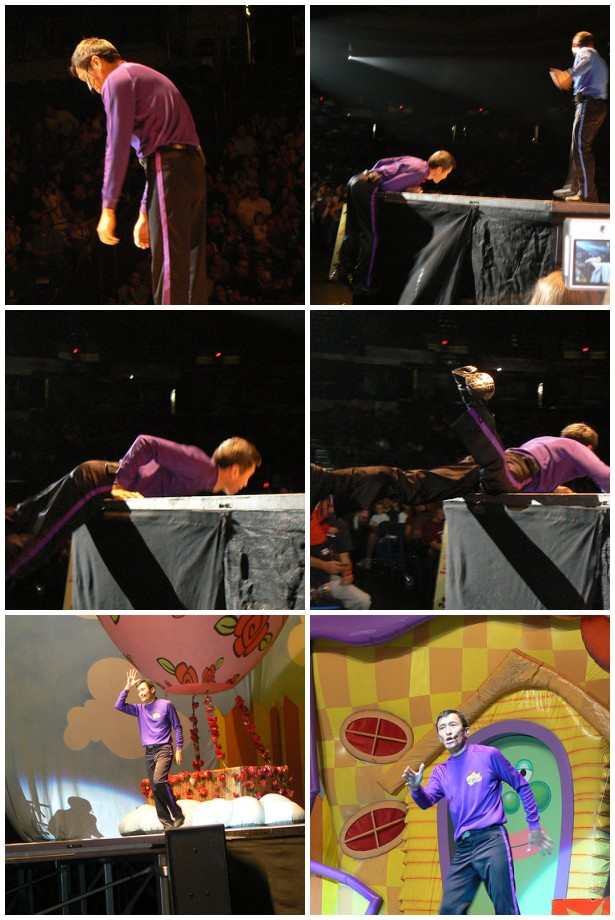 Soon after this all of the characters were brought onto stage. JL and I have a fondness for the quirky nature of Captain Feathersword. He’s an amazing character who is next to impossible to get a photo of. Last year almost none of them came out since he’s constantly zipping, dancing, jumping, flying, or skating across the stage. This year the challenge to JL was to get some decent shots of Captain. I am happy to report JL passed this test!      *** Please note Captain Feathersword and his rather large banana! Sorry I just had to go there – LOL!

Here are the rest of the Wiggles – Dorothy the Dinosaur, Wags the Dog and Henry the Octopus. Soon after this they went around collecting the bones for Wags and roses for Dorothy. Sam’s wife (one of the Wiggly Dancer who is from the US) came over and collected the ones from NHL. She was so sweet and talked to him for a few seconds before moving on.

Here are some photos of all different Wiggles and the Wiggly Dancers. 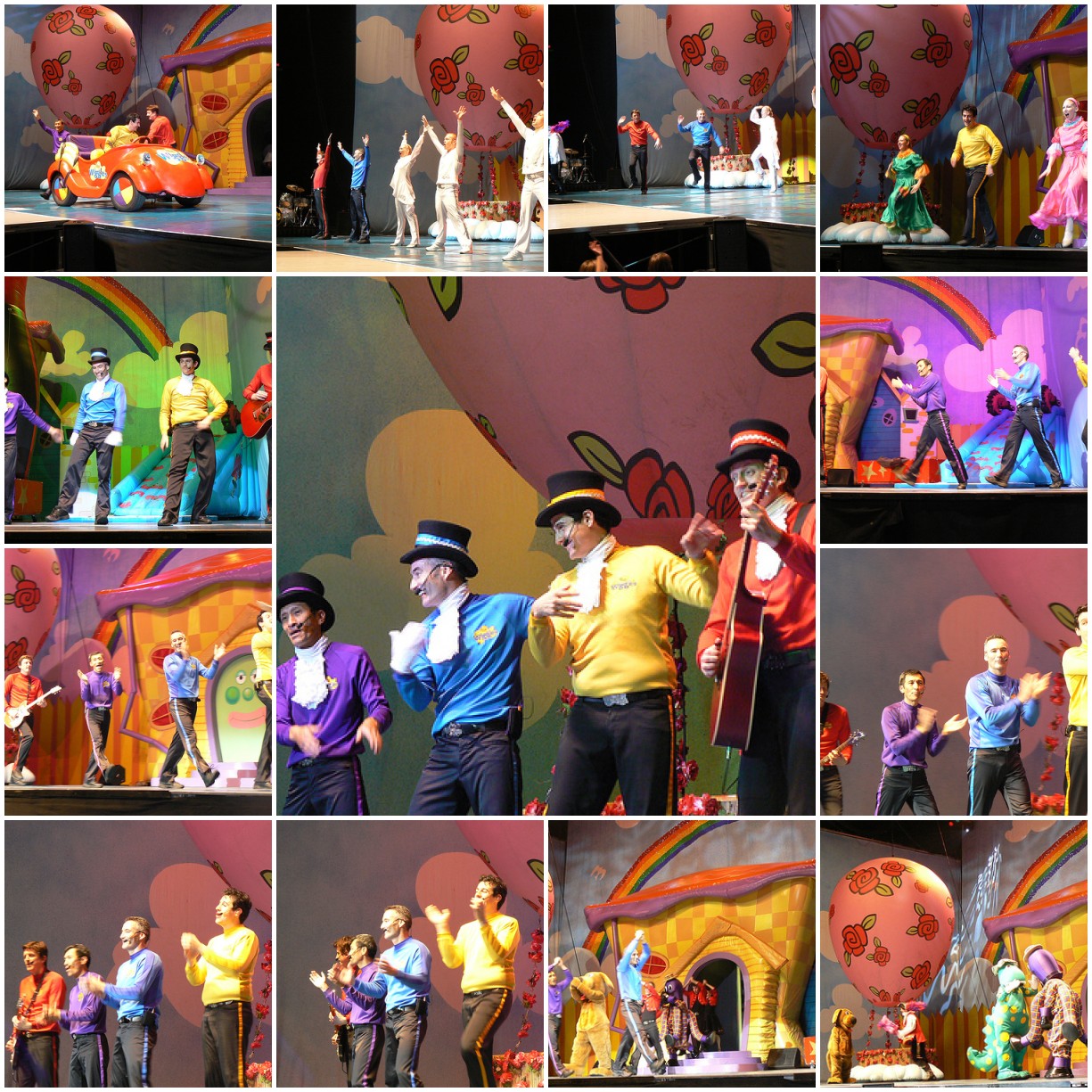 While Henry was on stage, NHL’s absolute favorite they cued up the bubble machines that we had noticed near our seats. Quickly it looked like we were under the sea with Henry. Please note what NHL was more interested in doing. I kid you not, all of the kids close to the stage were doing this rather than watching the Wiggles. 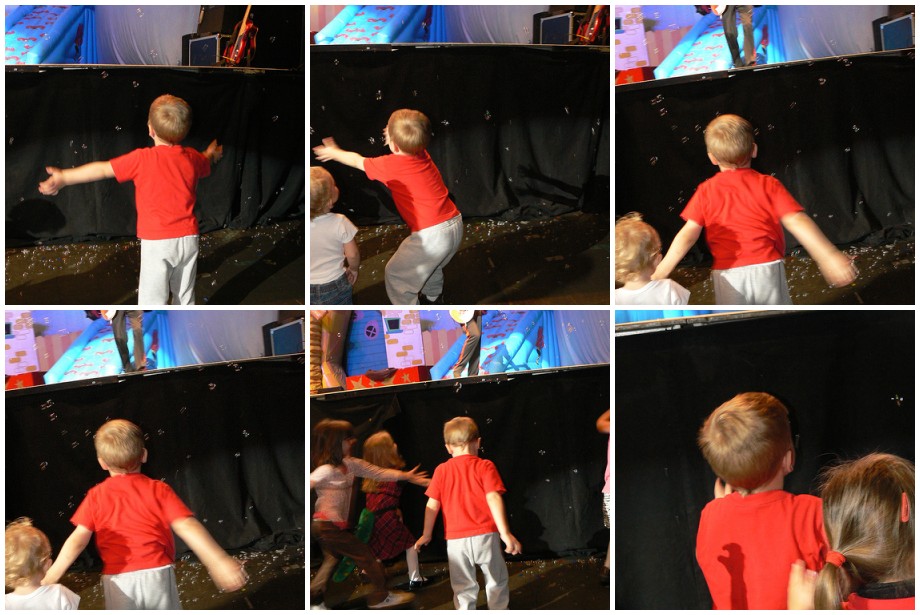 Now for a funny – well at least for adults with SICK -er I mean creative minds. Just look at the sequence of events below on the left involving Jeff. . . then check out his reaction on the right.  Pay special attention to where his head and hands are. LOL!!! 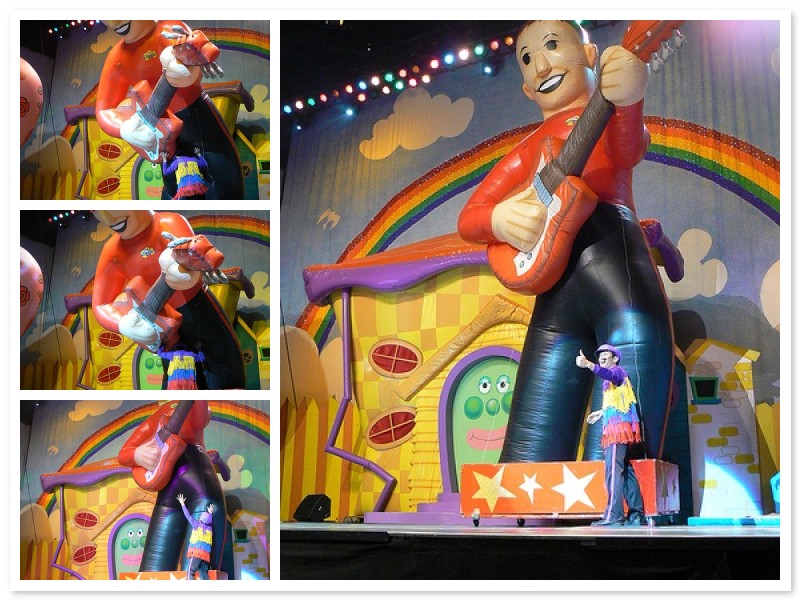 During the show Captain Feathersword is invited out to show off his new ballet moves. The other Wiggles mention they are nervous because they had not seen this before he performs it. Before you know it he comes flying through the air on a rope right into the Murray balloon. Here’s the sequence of events. Please note his nifty black tutu! 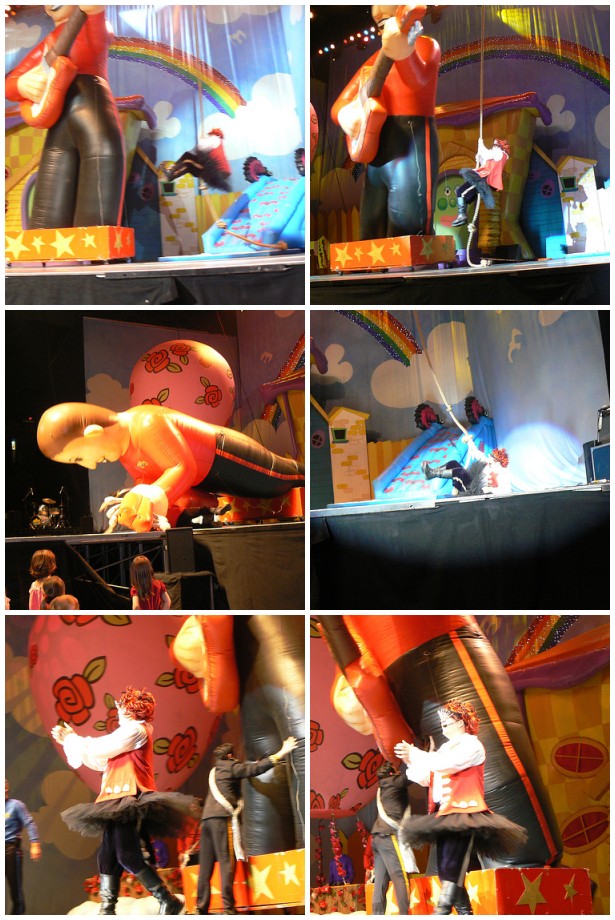 The last mosaic is to show how well the Wiggles make kids laugh. They had a sketch leading into their famous song. Out walks Captain Feathersword in a duck outfit with two other ducks and Anthony. You already know this is going to be good. Captain is trying to convince Anthony that he is a duck, but he can’t quack. All he does is say cock-a-doodle-doo. . . he just can’t spell it. Here are a few shots from their little act and NHL’s reaction (he was in hysterics several times). 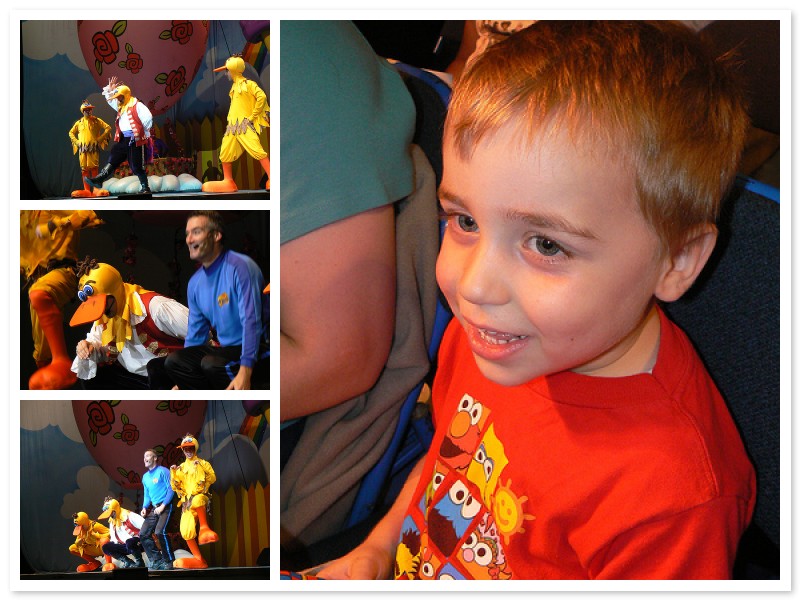 Then an hour and a half after they began (no intermission) the show was over, the Big Red Car was out and the Wiggles were heading off the stage. 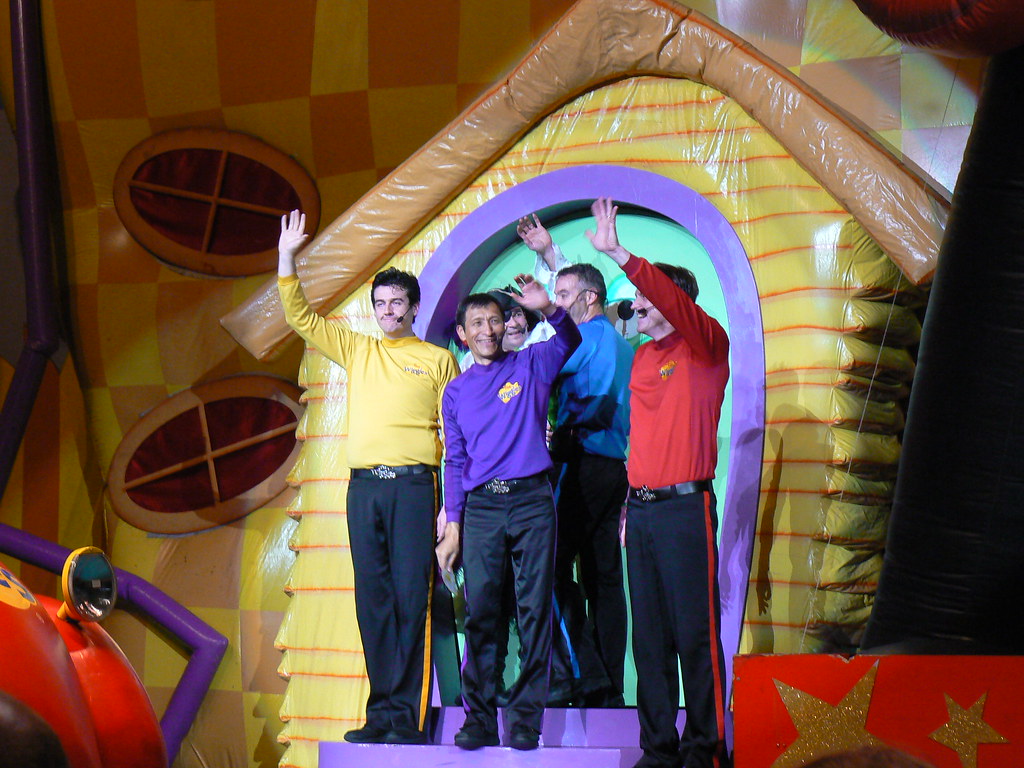 It was a wonderful time had by all three of us. It was well worth the money. This morning (now two days after the concert) NHL was chatting with me in the car about favorite things from this week. He said the following to me "Mommy we need to have front row seats from now on – they were really good!"   LOL