Since the boys went to bed late and I’m still too hyper from the concert myself, I am sitting here sorting through the 324 photos that JL took of the Wiggles.

YES you read that right, he took that many.

I narrowed those down to 189 to pull to Flickr, but will upload those at one point tomorrow. We got some amazing shots of everyone. Sam, Anthony, Murray, Jeff, Captain, Dorothy, Wags, Henry and the Wiggly Dancers put on an amazing show. NHL was in shock at everyone being so close (we did a kick ass job with the front row seats)!

I will try to post  more about the show tomorrow with LOTS of photos. Then JL and I have to play nice and not put adult captions on a few of the photos (like the ones with Jeff’s head in Murray’s crotch, followed by his hand and then a thumbs up). Can you tell we’re too tired now? 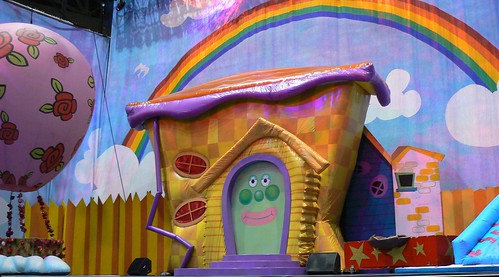