The weekend was a whirlwind of errands and things all packed into one. Justing thinking about it makes my head hurt. . . oh wait I already had this stupid headache!

Saturday morning NHL received a phone call from Nana and Papa. They wanted to know if he would like to go with them to breakfast and out. So we quickly got him ready to head out with them. Then a little while later they all called to see if we wanted to head to the new Lowes with them. We said sure. When we got there NHL was so excited to go in. He had watched the building get knocked down and the new one slowly go up and was thrilled to see the final product. When we walked in my father knew to ask for a coupon. If you asked they had buy $25 get $10 off coupons. So we took one. I needed a new extended snow brush for my van and we also bought the new energy saving fan bulbs for our dining room. Now we’re investigating new insulation for the attic to try to help prevent the monster ice damns that form. So we used the coupon and the snow brush was free!

After that we were going to head to Sams. Then my father pulled his car over and asked if we wanted to stop at Toys R Us. He explained that he had heard on the radio the day before that they were having a special sale on all Fisher Price Sesame Street items (50% on them except the TMX line). We arrived before they opened and within 5 minutes they opened the door. We bought a bunch of things for Chanukah gifts for cousins and a few items to put away for future baby gifts. Then we went to Sams and NHL loves snacking there on all of the samples. Then it was time to head to Target to turn in NHL’s antibiotic medicine chart for a prize (LOVE Target pharmacy).

Once we were done with this we went our separate way from my parents. We went home to do lunch. JL decided to make applesauce in the crock pot. Once it was set and on we went to Michaels to buy some items for NHL to have for The Wiggles concert. He bought a rose for Dorothy the Dinosaur and bought things to make a bone for Wags the dog (photo of this to come later). Then it was back home to eat and then we went to the grocery store.

Sunday we got up and went to our Shul for a Story time and craft hour that is for 3-5 year olds. This was the first time we went. Noah really seemed to enjoy it. There were only 5-6 kids there (we’re told there are usually 12-14). They read the kids Five Little Gefiltes. The book was hilarious! Then it was time to do the craft. They had big plates, glue, and all different types of beans for the kids to make mosaics. Some kids made Star of Davids and others made their own things.

After this we had to do to Verizon Wireless to get our phone fixed. My parents met us there and we all got new phones ($150 ones for FREE x 4) and added my mother onto the plan. We were there FOREVER. We left there called my friend L to confirm plans to meet at the park for the boys to get energy out. We went back home had lunch and I tossed laundry in (I found all of NHL’s old 6-9 month clothing to wash and get ready). At 3:15 we went to the park to meet L and IA to play. The boys had a blast. Here are some of the 100+ photos that JL took while we were there (he was in his glory getting some autumn shots).

NHL going down the slide: 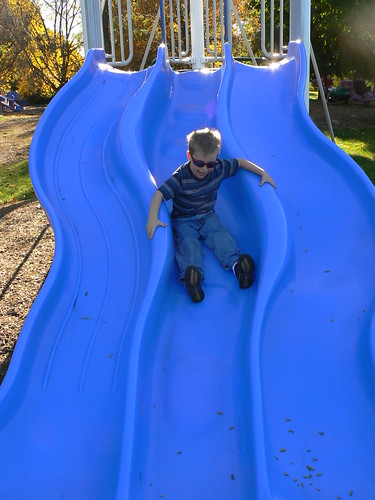 I LOVE this shot of NHL having fun crunching the leaves. It’s a great photo representing the fun in fall. 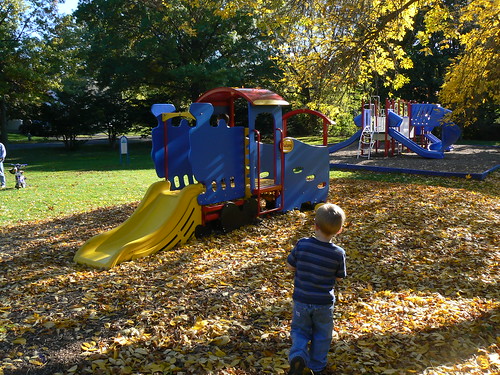 NHL and IA on the train. This was one of the few times they stood still long enough for a photo with both of them in it. 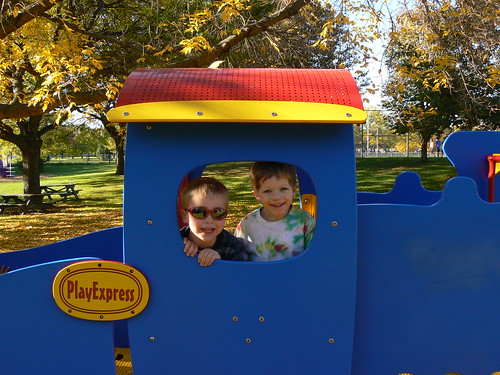 Both boys on the slide together: 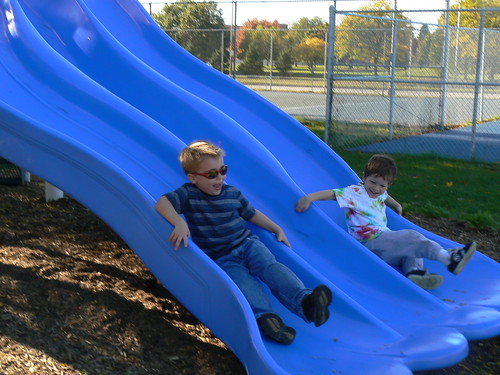 Most of the time NHL was running after IA. Here’s a shot of what it was like! 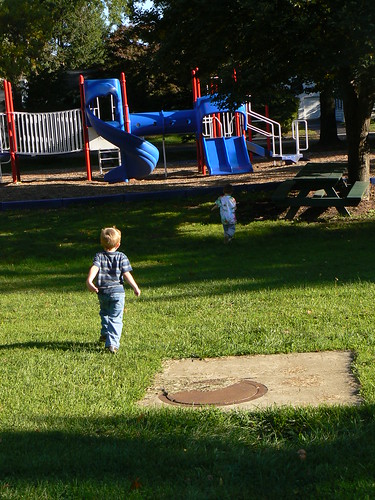 NHL on the swings being a goofballs: 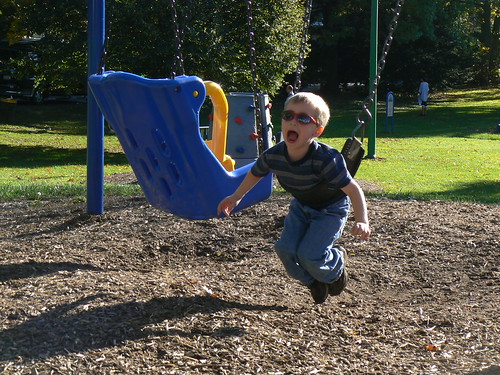 JL decided to help both boys on the swing, so I took over on camera detail. Note that both boys were chatting with each other at one point. 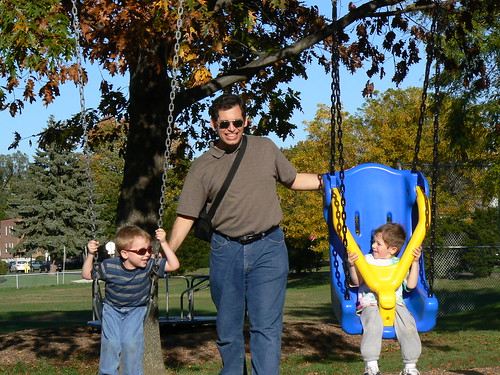 Soon after this IA was chanting "Higher! Faster!" to JL. You will see he was in heaven since we saw his feet most of the time. 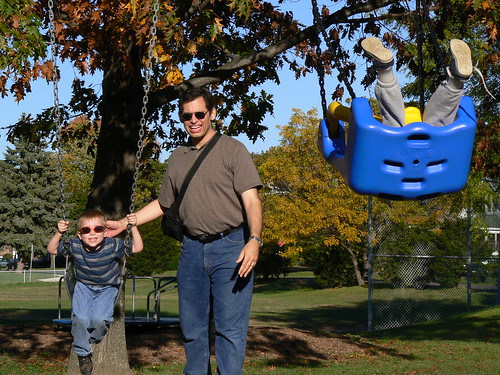 During this time JSL was in his stroller enjoying the almost 80 degree day. He was taking in the sites. 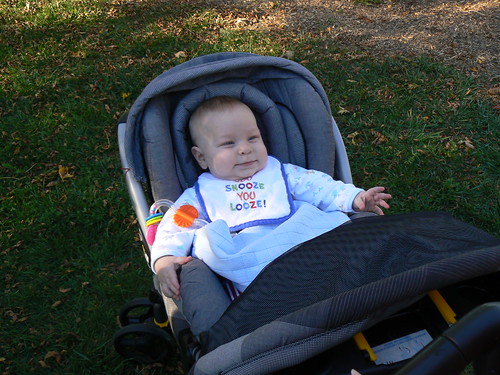 Next it was time to break out the soccer net and ball. Here are a few shots of how the boys played soccer. 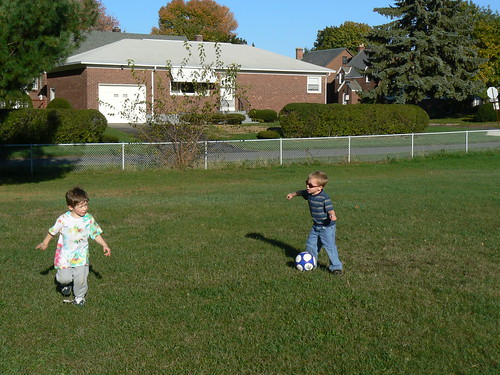 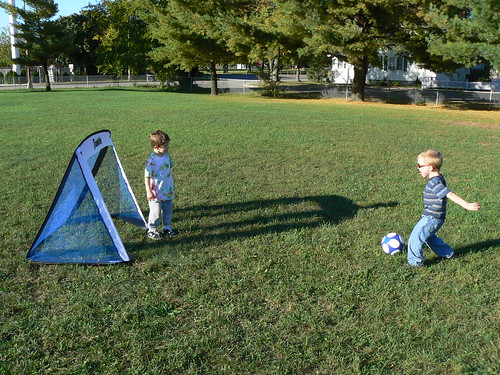 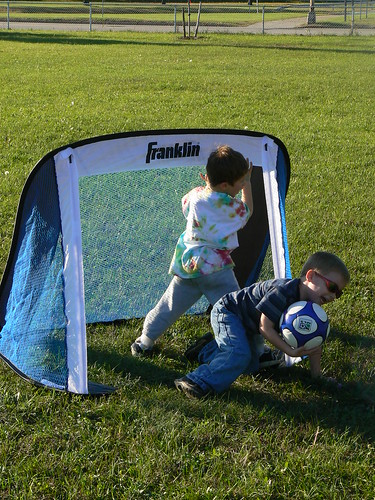 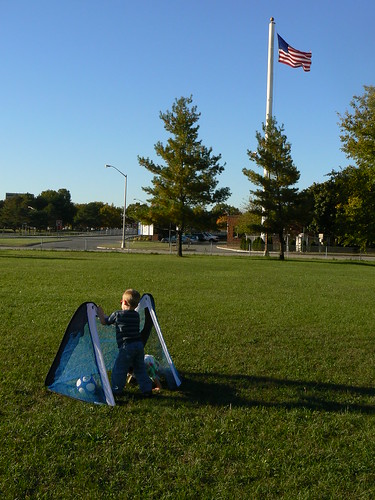 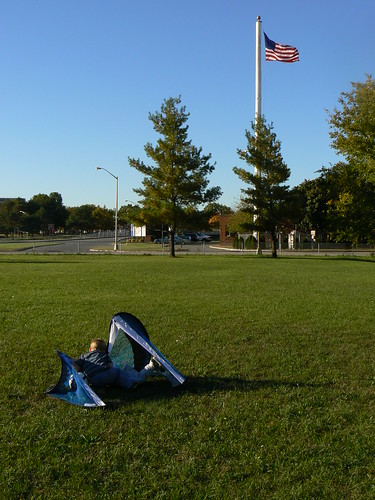 You can just hear the leaves crunching: 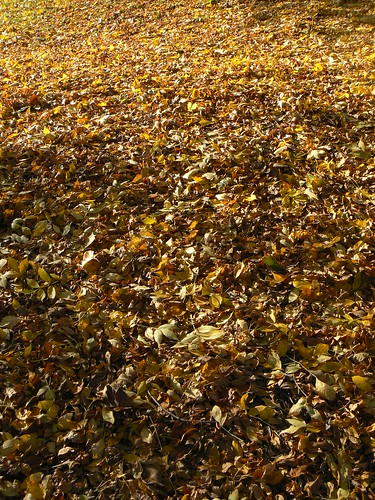 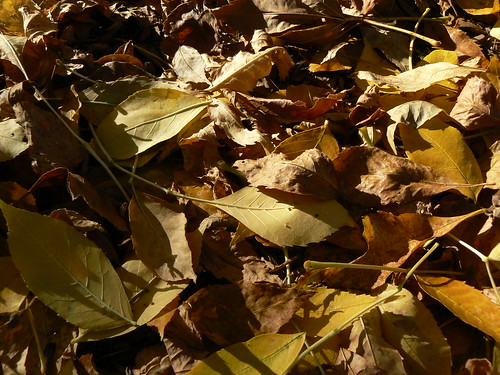 The boys on top of the climbing wall: 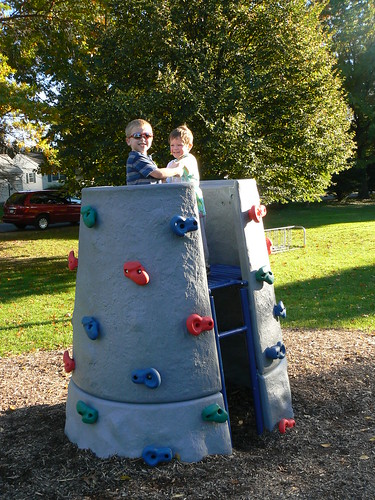 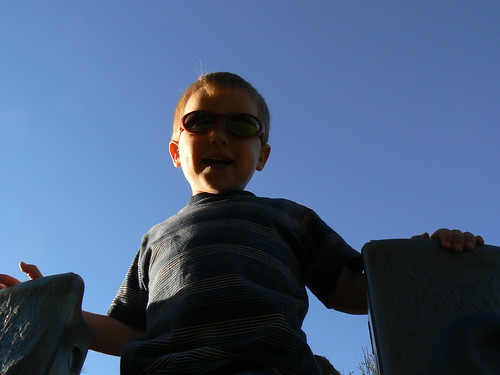 JSL so fascinated with his big brother: 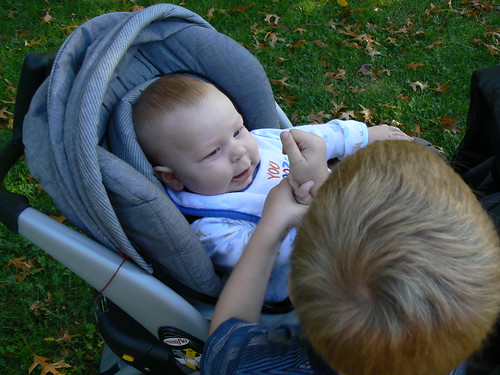 Before leaving the boys were fooling around and they fell onto the ground. IA was on the bottom and clocked his head on the ground pretty bad. Luckily he seemed to be fine, aside from biting his lips.

From here we picked up my grandmother and went to dinner at my parents house. I now LOVE tilapia since it is SO low in points (Weight Watchers that is). I programed my father’s new phone, JL uploaded their photos to WinkFlash and we had a nice meal. JSL started crying hysterically at 7:00. Nothing stopped him. The poor kiddo was teething. As I posted before this those suckers on the bottom broke through Monday.

Well, that’s basically the weekend. I best be off to get ready. We are going to see The Wiggles tonight and have front row seats. I need to gather supplies for JSL to have at Nana and Papa’s house