Every six months, you look forward to going to the dentist. The office that we go to is an amazing place for children. When you walk in, you would never know it was a dentists office. The only item that gives it away are only books about teeth on the shelf. After that, it is a playroom and video game wonderland.

This past week, I picked you up after school and we went to the dentist a bit early so you would have a little more time to play video games. You and JSL loved it.

When it was time to head back to the room for your teeth to be cleaned, the woman noticed that you now have your permanent top front teeth. This meant that it was time to do some more extensive x-rays. You are not a big fan of x-rays and these new things definitely scared you. We talked you through the entire time. When we moved to the room with the panoramic x-ray machine, the contraption really worried you. Still, you listened to us and made it.

When the dentist walked into the room after your teeth were sparkling, she talked with me. She said everything looked good on the x-rays and paused. Then she said she noticed something. It seems that the silly Tooth Fairy made a mistake and took one of your permanent teeth. It is missing and happens to people from time to time. The Tooth Fairy must have thought it was so special and took it on one of her visits. I wonder if she knows we caught her and will get you something special soon. I guess we will have to wait and see.

Hang in there sweetie, there is nothing to worry about. Your dentist told us a great place to go and we will take care of that missing tooth.

Over the last three weeks, you have lost three new teeth. The latest came out while you were waking up this morning. I have to admit, I am VERY glad to see this tooth gone. For quite some time, this pesky tooth has been twisted in the front of your mouth. We knew that it was probably ready to come out, but it did not want to give.

On the snow day last week, JSL bumped into your face. You were hurt and came running to me. I immediately saw blood coming from your mouth. I feared the worst since we were getting 13” of snow outside. Luckily, it was just your brother knocking your tooth into a new direction.

That little tooth held on for another week. Friday while in school you must have eaten something that bothered it and once again it started to bleed. When you told me about this, I will admit I was starting to plot how to help you get that top front tooth out.

Thankfully your tooth must have had enough. Now we have to get ready for another visit from the Tooth Fairy tonight. Here’s a look at your rather toothless smile: 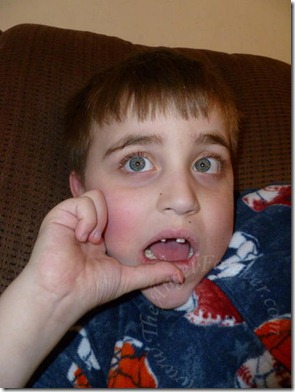 Keep up the great work getting the teeth out on your own. I have a feeling we may have the other top one coming out sooner rather than later. Man, you sure are giving the Tooth Fairy a workout.

Sunday morning NHL was eating breakfast on the couch. TechyDad was getting ready to take him for his Hebrew lesson. Suddenly, I heard NHL yell that he lost his tooth. I went into the room and he was laughing and way too calm. I honestly did not believe  that a tooth had been lost.

Why? A little history. Prior to this, NHL had needed assistance from the dentist to get his teeth out. In fact, the last time the teeth did not loosen up a lot and he was afraid of them coming out. When we noticed that he had 3-4 wiggly teeth, he was excited. We would often find him with his hands in his mouth wiggling them to get them out. Suddenly he was interested in a visit from the Tooth Fairy.

So on Sunday I watched as he got up off the couch to search for something. I asked what he was looking for. Again, he told me his tooth. So I asked NHL to open his mouth and show me. 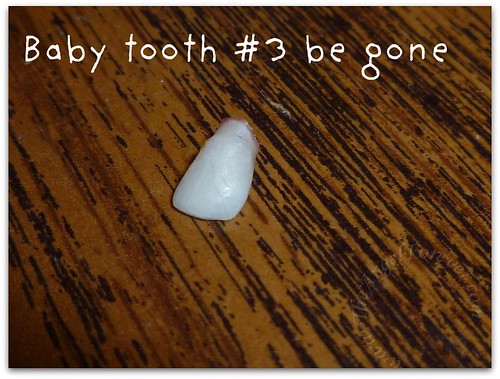 Oh my goodness! Not only did NHL have a tooth missing, it was different than the one I was expecting to come out first. So the two of us looked on the couch and we quickly found it. While he was showing the tooth to JSL and TechyDad, I went to locate the Tooth Fairy pillow.

Last night the Tooth Fairy came to our house. She left NHL a new book, dollar coin, and a note. Now we wait and see when the next visit will be. My guess it will be sooner rather than later. 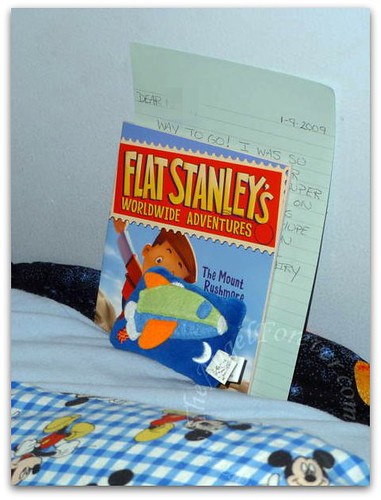 What did you get from the Tooth Fairy as a child and what do your children get these days? Inquiring minds would love to know.

Check out NHL’s grin, do you notice anything different? 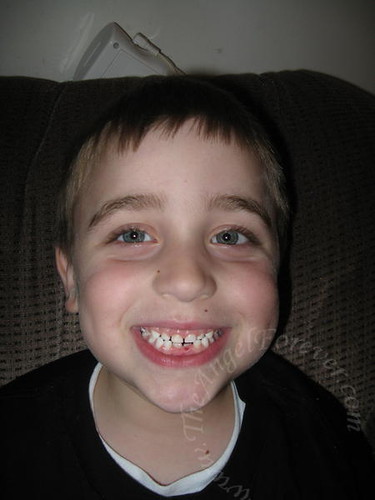 As a comparison, this is a photo taken a little over a week ago: 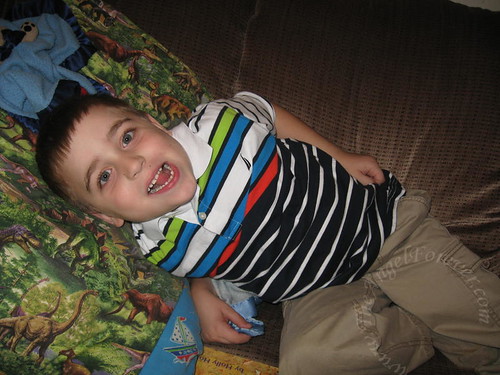 Yes, NHL lost his second tooth today. Once again, the adult tooth came in behind his baby tooth (history of the toothy fun can be found here). I figured we would work on it and see what happened since he had a dentist appointment coming up. Today was the dentist appointment. Last night, TechyDad tried to get the tooth out, but it did not go well (to say the least).

When we arrived at the dentist office, he knew it would probably get pulled since it really was close to coming out. When the dentist came in after his teeth were cleaned, she agreed. Given his worries and the "fun" trying to get it out, she would see what would happen. She applied some of their magic numbing gel onto the area, let him sit for about two minutes. Then she asked him to open his mouth. As he was trying to complain, she got her hand in and pulled the tooth out. It seriously happened so quickly that NHL could not believe it was out.

So this evening, the Tooth Fairy will be coming again and then we wait to see if/when the next teeth start to wiggle. Oy!

Night of the Tooth Fairy

Can you hear the party music going over here? We are having a party here because NHL finally lost his first tooth. This little booger has been wiggling since NHL bit into corn on the cob back on July 3. We sat back for quite some time and encouraged him to wiggle it and work on it. Then on August 12th we noticed that his new tooth was coming in behind the baby one. Hubby and I were quite nervous, especially as it moved up quickly.

A week ago, we really started working with NHL to loosen the tooth (he even got a note from the Tooth Fairy for encouragement). Monday, I called the dentist and explained how I was worried about things and we made an appointment for Thursday. Tuesday night, JL sat on the couch with gauze and really worked that tooth. They felt a pop and the tooth was barely holding on. Unfortunately, NHL was upset over the blood and his gums bothering him.

Today (typing this on Thursday), we went to the dentist. I was fully expecting the worst. Much to my surprise, the dentist told both of us that his gums are probably really sensitive and we should numb them up to really get a good wiggle. She put some on his gums and barely touched it and the pesky tooth popped out of his mouth! Clearly, the Wiggle Tooth Olympics of the last two nights that brought much crying and screaming had worked that tooth to the point of surrender. We also learned that we will be purchasing some gum numbing gel for the next tooth which we can also see is about to cut.

Can you tell NHL is excited about the Tooth Fairy coming? Oh, and this is the pesky tooth that wanted to hold on for dear life. 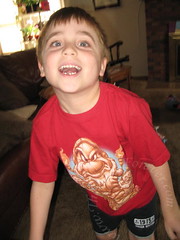 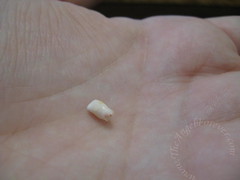 Here is my big kid all ready for the Tooth Fairy tonight: 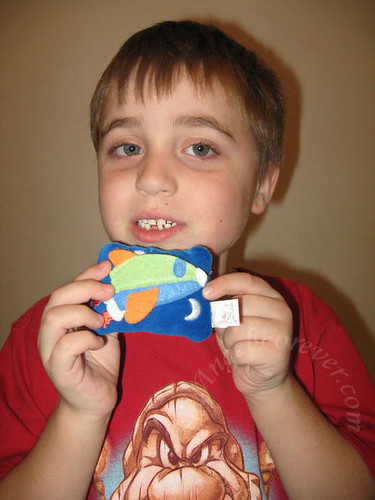 So my question for this week is inspired by the recent events:

Do you remember how you lost your first tooth? I would love to hear the stories and I’m sure NHL would too!