The following picture was going to be my Wordless Wednesday. Unfortunately, a stomach bug that has been passed through everyone in our house finally hit me yesterday afternoon/evening. Here is the photo: 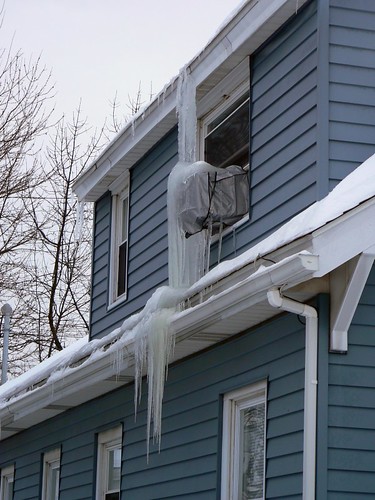 This is the side of our house. As you can see it is a HUGE mess thanks to recent storms. Since we bought our house we have had trouble with ice damns forming and at least two times backing up into the house. I now hear water dripping and am paranoid. The mess pictured above was a new spot that we had never had problems with in the past. The cause – leaving the AC unit in the window.Why did we leave said AC unit in? Well,  because we have had a really hard time year in and year out getting that sucker back in to cool the room. We never figured it would be an issue.

The issues that caused the horror shown stem from something that occurred when we bought the house. One of JL’s coworkers removed a tile in our ceiling because it was bulging. Much to our dismay we had a leak in that section of the rubber roofing. That part of the roof had to be replaced. $1000 later it was done just in time for the new carpet to be installed. So for over three years we have left the hole in the ceiling with NO insulation. Can you see where this is going?

Yes, the lack of insulation, along with the heat escaping from the AC unit in the window gave the ice the perfect opportunity to have this occur. The AC unit itself allowed a wonderful spot for the obscene amount of ice to collect.

Tuesday evening JL went up to try to chip away at the ice and put some stuff up there to melt it. That did little or nothing. Here is all he was able to remove next to his hand as a size reference: 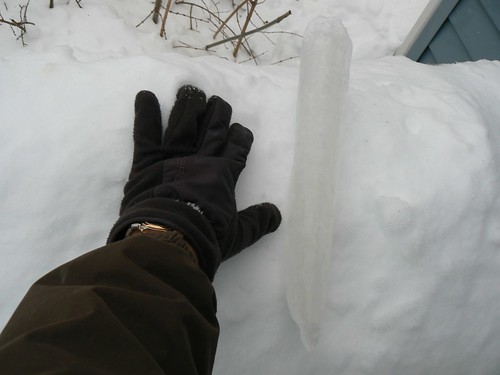 Fast forward to me pitching a FIT to dear hubby about this and fearing that the AC unit was going to fall and put a hole in our roof and land in a room below. I blew a gasket (I admit it). Luckily JL talked with our friend J. J had some ideas on what to do and said he would come over. So J and his wife (who I have grown up with) H came over last night. By the time they got here I was not feeling so well. I was in denial and thought I was feeling better. Thank goodness H came – she watched the boys while I tried to keep stomach contents in.

JL and J went upstairs so they could see what was going on. They brought up something to hack at the ice from the tiny crack in the window. Here are two views from the window upstairs: 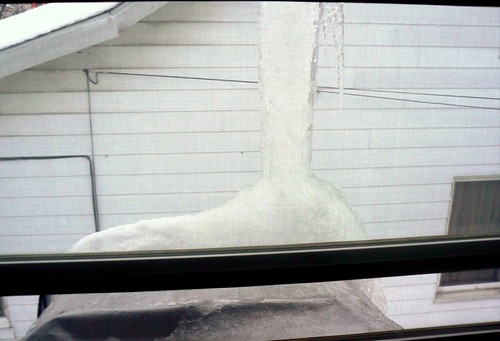 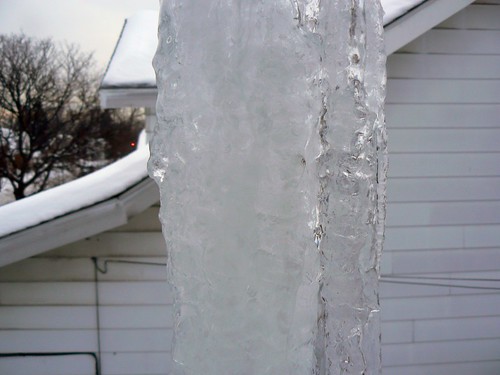 The guys came downstairs and told us they were going up the ladder to see what else they could do. JL called soon after (via cell phone) to tell me there was good news and bad news. The good news – the ice was gone! The bad news – the AC cover came with it.  JL and J came back in and were going to head to Home Depot for insulation and a tarp to put the AC on in the attic. I asked if they could use our old shower curtain instead. I really did not want them going since I was feeling worse again. They said they would. So they went upstairs and removed the AC, took away more ice and then came down.

At this point I was GREEN — I will spare you the details.

The end result is the following was removed from the house (here with some fresh snow on it) and the house as it is now: 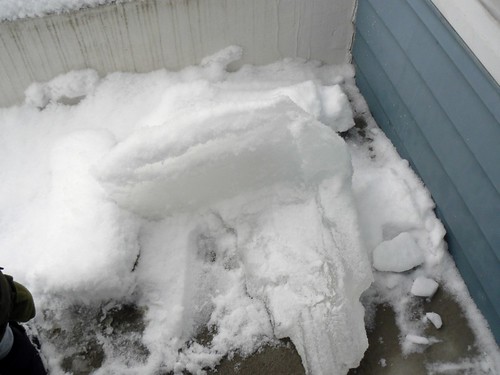 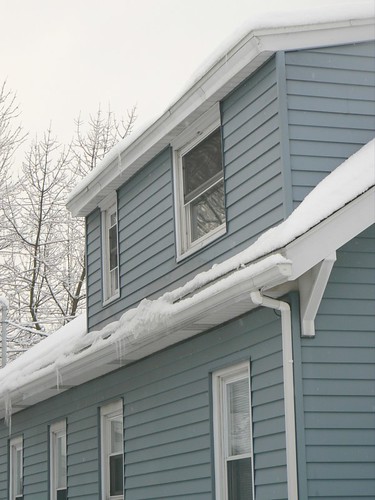 So now you can see why I "love" this house so much (long story goes with that) and why I want to move to Florida.

A big thank you to J & H for being so wonderful and helping us with this. I seriously was going insane from worry about this ice formation on the outside of the house.  Also sorry that you were exposed to whatever I had – the good news is 24 hours later I feel human again! 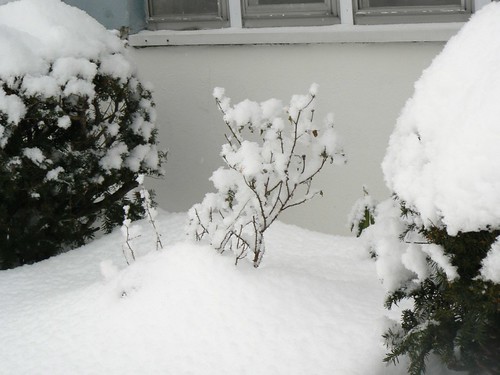