Friday JSL finally was well enough to take him for his 9 month well baby visit. His original appointment was over two weeks ago, but the pinkeye episodes, followed by his four day hospitalization changed that twice. The tired little guy fell asleep in the waiting room, so he was far from happy to be woken up just to be stripped naked for a weigh in. I felt horrible, but had to do it.

Here’s a photo of JSL at 9 months: 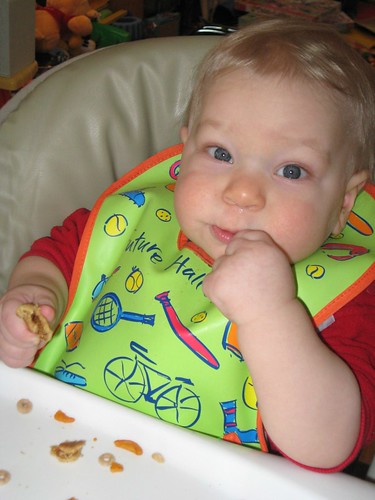 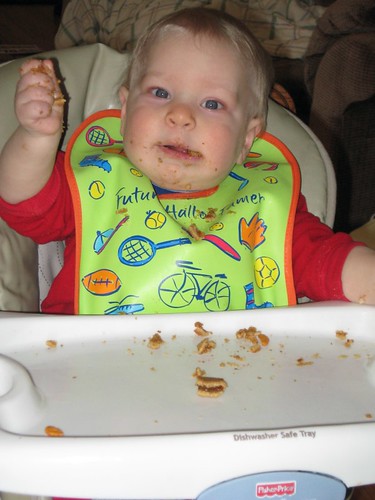 I was worried about his weight since I knew he’s lost some over the last few weeks, but it may have been mostly from dehydration. The last time he was weighed was at the hospital when he arrived in the emergency room on the evening of his febrile seizure two weeks ago. At that time he weighed in at approximately 22 pounds. Friday his weight was 21 lbs 15 oz (75th percentile), so I was very happy that he must have been back on track again. Then it was baby wrangling time for a measurement. I am not sure if this is accurate or not since he was moving around so much and someone who usually does not work with kids was measuring him. Still he was approximately 28 inches long (50th percentile). At 6 months old in November JSL was 18.1 pounds and 26 inches (percentiles were the same).

The doctor was very impressed with how he was sitting up alone so straight and was trying to pull up on anything that was nearby. She went over all of the developmental things and he was there or further. He even tried to demo crawling on the exam table much to my horror. I asked her about his tongue tie and whether we should do something about it now before he is old enough to be more upset with a procedure. She told me absolutely not until we know if it causes an issue with his speech. She said the fact that he is already talking so much and making great sounds for so many letters is a hopeful sign on that. She said that JSL is definitely "talking" more than a typical 9 month old. Of course I told her he has to to keep up with his almost 4 1/2 year old brother who does not stop talking. He says: Mama, Dada, Noah (No-Wah), big brother (big bro no wah wah), Bye-bye (while waving – especially to dismiss me from suctioning his nose), I love you, Nana, Papa, and other things are definitely parroted.

We talked about food intake and nursing and he is obviously doing well there. She is just concerned with keeping up to speed on fevers if/when they start with him. So I have a bag of medicine tricks with me at all times in case we need them. We already went over how we will do preventative Motrin administration for his 15-18 month MMR vaccine. That was a good idea to me since I had a bad reaction to that (I thought my mother once told me one of my febrile seizures was after it too).

We left the office feeling really good about things. I met one of the mommies from my local group in the parking lot to get some new to us toys for the boys. JSL and I went home, ate lunch and picked up NHL before stopping at the library for some movies. By the time JL was coming home from work JSL was not sounding good again. The poor kid was congested and I had to suction him a lot to make him comfortable.

Here are some of the new to us toys that we were lucky enough to get. The zebra was what we were going to get him for his first birthday, but now works. Thanks D for meeting up with me for the toys – the boys LOVE them! 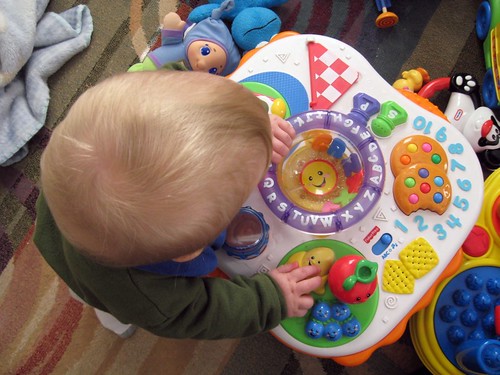 NHL with the Pop-Onz table: 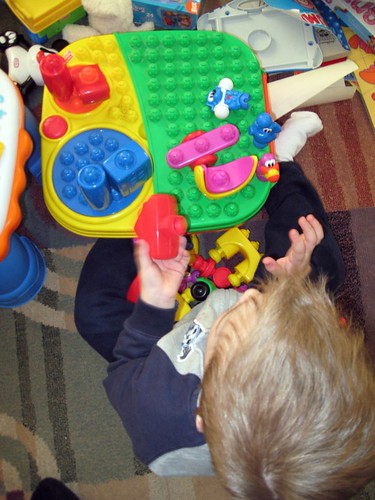 NHL with the zebra: 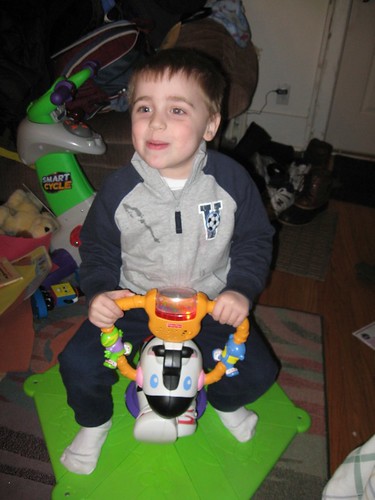 Although a little too small to use it on his own, JSL loves the zebra and did not want to get off. 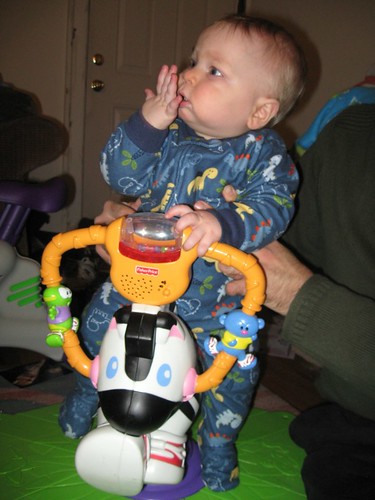 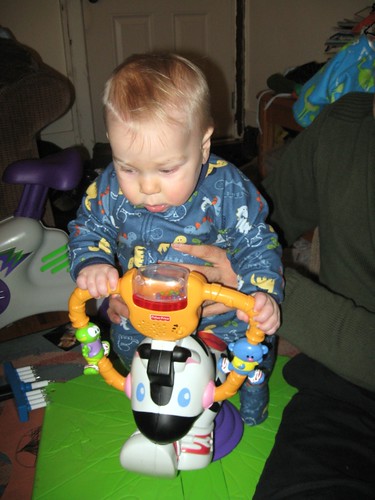 By Saturday morning he was pretty miserable and his nasal secretions were not looking good. I called Aunt M to ask her some questions about how many days off an antibiotic something would resurface. We opted not to call our doctor and wait and see. Most of Saturday and Sunday he was OK. He was more clingy, stuffed up some, and very emotional, but nothing too alarming. Last night he was really congested and making the rattly noises from before our hospital stay. Add to that the thick nasty mucous that I was suctioning (sorry if TMI). His temperature was 2.5 degrees high for him, but never went up more than that (thank goodness). He did not want to stay in his crib (just lowered since he’s able to pull up from sitting) since he was so stuffed up. Thanks to this rough night and sounds horrible this morning, I decided to call the doctor today. So now I am waiting for that call to come back (it’s been two hours now). Our original doctor, not the one we see now will call back since our usual doctor is off all week. We just need to know what to do since he seems to be getting worse pretty quick.

P.S. Do not forget to enter my giveaway that continue to Thursday for the $30 certificate to Announcements Galore.