For just over three weeks JSL has been battling something. The poor kid is only 9 1/2 months old, so that is a long time in his short life. Yesterday I was really flipping out because of the way he was acting, the increased mucous and change in the appearance, and the fact that he was hitting his head and pulling on his ears. Although cute, it is not good when he does a Home Alone impression. His poor cheeks and head and ears are getting a beating from the kid.

Although not taken yesterday, JSL looked like this again. This photo was taken the day before he was rushed to the ER by ambulance. VERY serious monkey who was not amused by much. 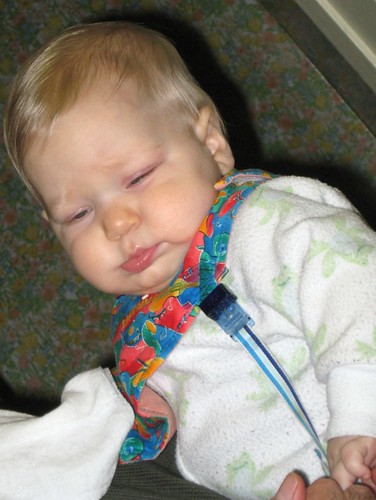 After picking NHL up from school the doctor’s nurse called back to see what was going on. I explained that the symptoms were EXACTLY the same as they were the days before he had his febrile seizure and was hospitalized. Based on this and the hitting/tugging of his face/ears they double booked us into get seen. So we went back up to their office at 3:15 and my father watched NHL. We saw the doctor that was on call the weekend of the hospitalization. He knew most of what had happened then, had been briefed from the PA that had seen him before that, and also knew we had been in since then (just last Friday for the "well" baby visit).

The doctor spent a lot of time with us. He went over everything that had happened, what was going on again, how long it had been since he was on antibiotics and then did a very thorough exam. I think he was anxious about the temperature going back up again and wanted to find a cause so we could stop it. He did a quick strep test that came back negative, listened to his lungs (still clear thank goodness) and eventually went to the ears as the last stop. Right ear looked great. . . then it was the ear that has been trouble’s turn. Sure enough the left ear had what he said was a lot of fluid, but not red or infected.

There is absolutely nothing we can do to help the poor kid at this point. The charming FDA has made it impossbile to help a child that is under two to dry them out with a decongestant (JSL desperately needs one). GRRRRRRRRR!  I am so ticked off – insert many other nasty words here because I want to use them.

So cure the child I dare you. Basically it will likely only be a matter of time until the ear is infected again. We have to try to avoid places with lots of germs – LOL. The doctor did say no cousin B-day party or travel this weekend until we know what is going on. So we wait and see and hope it will go away. I have an antibiotic prescription at home to start if his temperature goes to 100.5 to start immediately and then make an appointment to have the ear checked. At that point IF it is an infection we will likely be off to see an ENT. It really stinks that thanks to not being able to try medical approach we may be forced into surgery for the baby.

I am extremely nervous. The Friday that the photo above was taken JSL saw the PA at the doctor’s office and was told he had a virus and some fluid in his ear, but no infection. The rest as you know is history. So the next 24-48 hours will be filled with much anxiety.

So that is the update at this point. Now to try to get the little monkey to stay hydrated and figure out what to do about the meeting with the school district on Thursday about NHL for next year. Please tell me I can not go and write me a note.