This weekend was very busy for all of us in Angel Land. We had a 50th birthday party for our neighbor Saturday. The party was very nice. We were able to see many of the people who had become strangers over the winter months. NHL went with us, but we brought JSL to stay with Nana and Papa. He went there a sweet baby who could crawl and get into mischief. He was returned to us a determined child who wanted to walk holding on to anything and everything. He learned to walk with a ride on toy. Nana and Papa actually gave him his birthday present early and he is in LOVE with it. Photos to come later (no time to edit now). The nice thing we just keep him up and walking and he gets lots of energy out easily. Unfortunately it means his hands are higher and able to get into more. 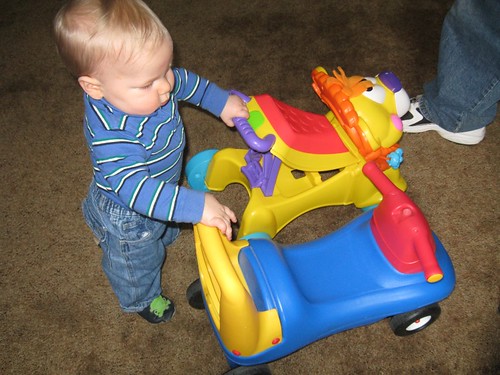 *ACK*  – My baby is growing up way too quickly!

Before the weekend I finished a washcloth that I had promised NHL when he was sick. He asked me to make him something new and selected one that looked like Snoopy (free pattern found here). This is what it looked like when I was finished. 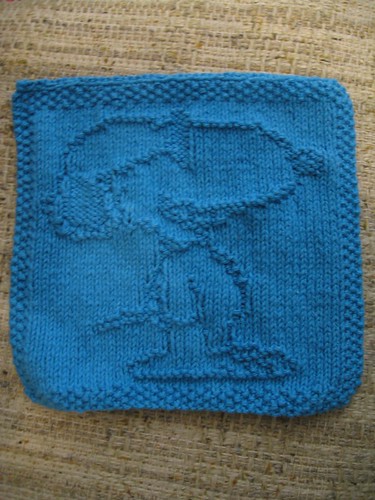 This morning the last rows of another knitting group were revealed. Once again ten rows were given daily and at the end everyone has the same great cloth. This one was from Shirley’s Knitting Knook Group on Yahoo and designed by Melanie of Lil Knit of This & That. This was the first KAL of the new group and is adorable. I believe I saw that Shirley called it Showers in Spring, but not sure what the official name is. 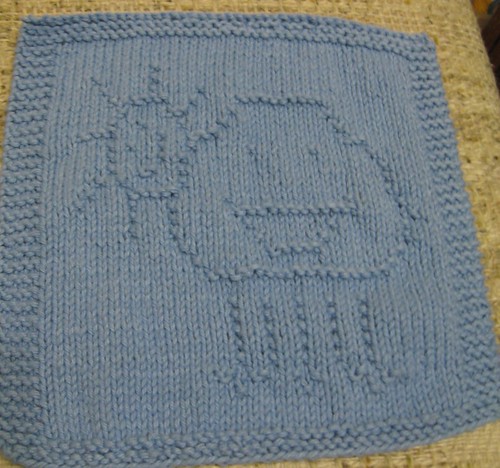 NHL went out for the morning/afternoon with Nana and Papa. While they did this we went to purchase Passover groceries since it is just around the corner. We spent an obscene amount of money on kosher for Passover products. Although our receipt showed that we saved $30 – I did not smile. The only part I was happy about was our deal on diapers. The store had a deal on big boxes of Pampers for $19.99. I had a P&G $2.00 coupon and the grocery store was doubling P&G coupons today. Thanks to this I was able to get JSL 72 diapers for $16 – not too shabby!

After putting away groceries and eating lunch, we went to pick up NHL and set up my parents new wireless printer. When we came back home I was set to dry the load of laundry that I put in this morning. Little did I know that I would take on another project. While putting things away I noticed that JSL barely has any clothing that actually fits. I hauled out all of the containers of 0-12 month items, put things away and took some out. Then I went and brought the 18-24 month things up. I decided to put all of those things into the wash. Then I made sure that everything that was 24 month and 2T was ready to grab easily for later in the summer. I certainly got a work out going up and down the stairs to the basement more times than I can remember.

« Gaggles of Giggles
Wordless Wednesday – Baby on the move »