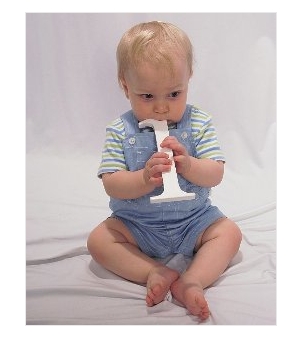 JSL was supposed to head to the doctor on his actual birthday for his well baby visit. Unfortunately that morning of the office called to cancel. The doctor in the practice that the we bring the boys to see was in pre-term labor. We rescheduled for May 27th with the PA since that was the earliest we could get in. Our doctor had moved up the appointment hoping that she would see JSL, but it was not meant to be. The good news is her baby was born a week later (quite early), but healthy and 7 pounds.

On the 27th we went to see the PA in the practice. Since it was the day after the holiday weekend things were quite hectic there. They were down a doctor to maternity leave and making up for the holiday. The appointment was quite late – say almost an hour and a half. Thank goodness JSL was really good waiting.

When we got into the room the nurse was amazing. She started taking notes about things and checking everything out. JSL is 23 pounds 5.5 ounces (50%) and 28 1/4 inches long (~25%). All of these are down from last time. Since he was in the hospital in February JSL has actually only gained a pound. Nobody was concerned since he eats well and being a baby in constant motion will change weight gain. They immediately picked up on something being wrong with the height. I mentioned that last time the person that did the height had no clue what he was doing. He measured from head to toes (pointing down). That makes a huge difference and would easily account for the problem.

I told the nurse that I was not planning on doing any vaccines, except possibly the Chicken Pox one. With JSL’s febrile seizure not too far back I am scared of giving him too much, especially with some that always cause fevers. She was great and said no problem she would tell the PA.

When the PA finally came into the room he was quite rushed. He did not really listen to me. In recent years he has been very good, but this reminded me of the way he had been LONG ago. He noted the height mistake and was not concerned in the least with things. We talked about introducing milk. I told him about NHL’s milk allergy and how dairy was not an issue, only regular milk. He told me to try it whenever JSL was done nursing. I was told to keep doing what I was (nursing wise) and if I could pump some to mix with some cow milk down the road.

Then things got a little ugly. The PA was upset that I did not want to do certain vaccinations. . . specifically the MMR. I explained that Dr. B and I had already discussed this when I had JSL in about a month before. She agreed with me that waiting until he was 16-18 months was not an issue and perhaps even longer depending on how the other vaccines went before. He got a little snotty with me and asked why. I explained that I had a horrible reaction to the MMR when I was little and it resulted in a very high fever. Not sure if that was one of the times I had a febrile seizure or not. He insisted that it would have to be done by the time JSL was 15 months, and I calmly told him that was not an option and reminded him that Dr. B and I had already talked this over.

He eventually left and the nurse came back in. She noticed the tension in the room. She was so sweet and told me not to worry. I asked her what he was using as the basis for the by 15 months rule on the MMR. Apparently he goes by he CDC recommendations. Well that is all wonderful for some kids, but my child has reasons not to do it and I am not going to overload his delicate system at this time. I now wish I had spaced his earlier immunizations out more. She mentioned that we should do one other vaccine that day with the Varicella (Chicken Pox). It was the Prevnar and has almost no issues, aside from the usual topical reaction.  I agreed to both of them with the knowledge that we would do Hib at 15 months and MMR even further down the road.

JSL was doing really great after the shots. He cried and was tired, but nothing horrible. By the next day he was a mess. His one legs was bright red, hot and swollen to the size of a grapefruit. He also had a fever and a rash was coming out. I immediately called the doctor’s office. They called me back later in the afternoon and noted the reaction on the chart. The leg was the one with the prevnar and the fever was likely from that as well. *sigh*

Thankfully both of the boys go back in August and will see Dr. B. NHL has his 5 year check up and JSL his 15 month. Both will need shots. I believe NHL his MMR, another Chicken Pox (*rolling eyes*) and possibly something else. JSL will possibly get the Hib at that point. The best thing, JL is going to go with me to the appointment! 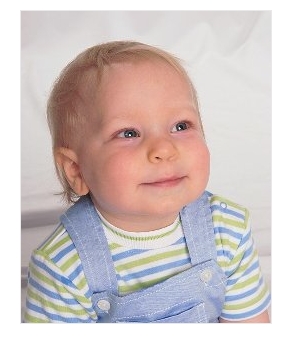 More of JSL’s 1 year portraits can be seen here.