It only took 15 months

Why is it that after the first child we become so lax with each subsequent child and often put things off?

Seriously, JSL is 15 months old now and we JUST had the first family photo with all four of us in it today. We had them done regularly when NHL was a baby, but never did it before this with JSL.

Of course there is a likely reason. Perhaps it is trying to wrangle all four of us into a photo. More specifically the two non-adult members of the family. Just trying to get a photo of each of them alone is a challenge, no less with each other and then the two of us.

Case in point, it happened Monday. Late Monday morning we went to a local amusement park with my parents and Aunt L and Uncle J (in from CA). We had a fabulous time out in the nice warm weather. At the end we happened to bump into someone we knew. JL asked her to take a photo of the four of us.

*** Please be warned – YES we were dorks and all had the same basic shirt on. NO, I did not purchase them. My parents brought them back for us after they went to Disneyland in April and we wore them Sunday for the first time.

The first photo is not too bad when you consider we had been in the sun and heat for two hours and both boys were hungry. In addition to this JSL had not napped. 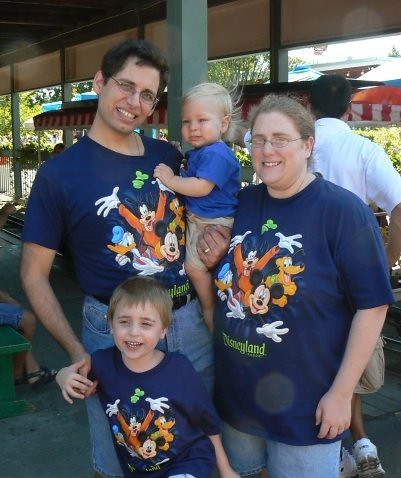 My friend asked if she should take another one just to make sure we had a decent one. We thought it was a good idea. The result is below. 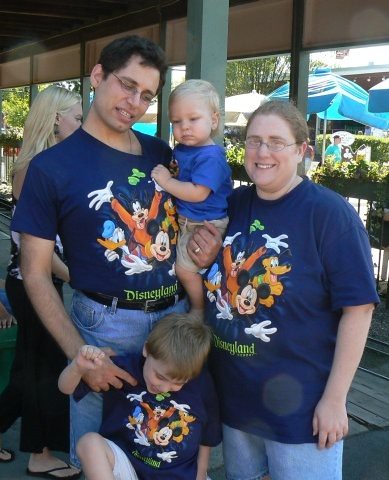 Yes, this is why we have never attempted to do anything before this point. I believe I have now scared off a person that has volunteered to take some family photos for us. Hmmm. . . maybe I should not have blogged this! Of course if we do those it will not be after 2 hours of play without rest/nap time.

There are so many other items that I need to catch up on (like we have another walker in the family!), but this was a busy weekend and NHL starts kindergarten tomorrow. Today we have orientation of sorts for a little while in the afternoon. More to come soon! That is a promise not a threat.