A little over a week ago the boys and I were visiting my grandmother for lunch and an afternoon together. Mimi made fresh chicken soup with giant matzoh balls for them to gobble up. For a treat after she had gone to the local farmers market and bought fresh ears of corn. The boys LOVED this part as you will see. 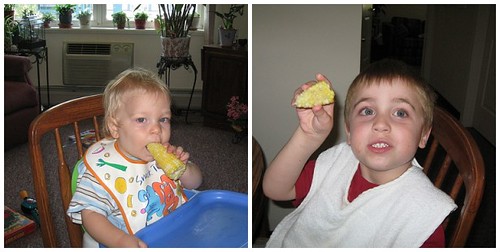 Toward the end of our visit my father called my cell phone. He wanted to tell me something interesting that had happened. He arrived home to find that the end of the driveway was blocked off so nobody could drive on it. When he got out of the car he saw that it had been sealed.

You are probably thinking to yourself  . . . "So what? People have that done all the time."

True, but the difference here is that my parents were not supposed to have this done!

When my father got to his front door there was an envelope with a bill inside. He looked at it closely. It was for 43 Grover Street and they live at 43 Big Bird Lane (obviously made up names – since we do not live on Sesame Street).

Ooops! Yes, someone clearly made a rather large mistake. The street signs are quite clear, so that was not an excuse. Plus when we went by the other house it is a shared driveway, so quite different actually.

My father put in a call to the company letting him know that they had made the mistake and that he was not paying for this since he did not have a contract. Sure, my parents were thinking of having it done soon, but it would have been done AFTER major repairs to their house were done so as not to be ruined by that.

The company must have been quite embarassed since they never called my parents back. For their sake it will hopefully serve as a lesson.

Oh well, thank goodness they did a decent job and did not ruin my parent’s driveway.