Friday night JSL gave us quite the scare. His temperature climbed to 102.7. This may not alarm most people, but JSL had a febrile seizure in February and his temperature was 102. His normal temperature on our thermometer is also just around 97, so this was almost 5 degrees warmer.

Urgent Care opened at 10:00 Saturday morning and we were there first in line. The doctor there said his lung to his ear, and throat looked fine. When he got to his ears he could not see anything. JSL had so much wax he could not see the ear drum. He wanted to try to clean them out some to get a better look. With the tool he was able to get enough wax out of the right ear to see it was fine. The left ear would not budge. The doctor was about to send us home at that point.

I opened my mouth and questioned using a peroxide water mix to try to blast out the wax. He said that does not work for little kids. I again reminded him that this was a VERY high fever for my son and he did not see the other ear properly. He agreed to get the nurse in to try to clean it. After 4-5 syringes of the mixture a huge plug came out of JSL’s ear. The doctor came back in and admitted I was right to insist. JSL had a raging ear infection. So bad that they told us we must head back to our doctor in 10 days for a follow up.

This is JSL 24 hours after starting the antibiotic and fever free since before bed on Saturday. 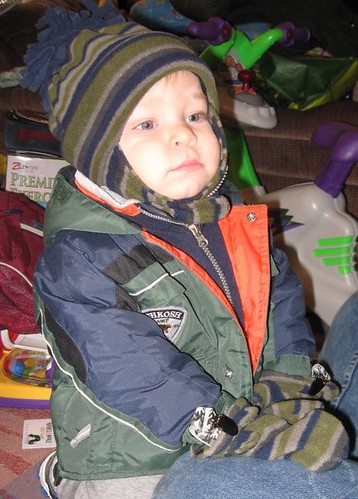 NHL has potentially tried to one up his brother. It looks like his antibiotic for the pinkeye may not be working. It had started to look a little better during the day yesterday. Then last night it looked swollen, pink and off again. This morning when he woke up it was slightly stuck shut again (had not done that the two previous nights). So, it looks like he will be going to the doctor today and is missing another day of kindergarten, poor kid. I also called NHL’s school nurse. She had told me the other day that at least two children had to be sent home again 2-3 days after the initial medicaiton was given because the infection came back. Looks like we may have something like that. Hopefully we can get this kicked enough so he can at least go to the Thanksgiving feast tomorrow before no school the rest of the week.

« My FIRSTS
Matzo balls for the Pilgrims »