Return of the pink monster

Thanks to Kailani at An Island Life for starting this fun for Friday. Please be sure to head over to her blog to say hello and sign the Mr. Linky there if you are participating. Th

My question for this week changed thanks to events on Thursday. I had planned on doing something to link up with a bloggy friend. Unfortunately, plans changed because I can not think clearly enough to do it properly. I will explain below.

This week my question is:

Have you ever had pink eye? If your child has, do you have any tips on how to wrangle them (aside from sitting on them) for drops?

Yesterday at around 10:00 in the morning my called ID showed a number from the school district. I was hoping that it was the OT calling about things. No, it was not her. The person on the other end simply said to me "Hi Mrs ___  guess who I have here with me?"

Notice that she did not identify who she was. I was able to figure it out. Apparently the pinkeye monster that has been wrecking havoc in NHL’s kindergarten class got him. I asked if it was just irritated from forgetting his allergy medication. She agreed that it may be from that and would give it until after lunch to see. Meanwhile I called our doctor’s office to get something called in quick because I knew it was not good. The nurse had already sent another child home with goo coming out of her eye, another was home sick with it and 4+ kids had it last week, plus I was dealing with it last weekend.

Bad vibes were coming from this entire thing. Sure enough at about noon the nurse called back. His eye was more swollen and getting really red now. I packed up JSL and went to school to pick up NHL. By 1:30 we were on our way to the pharmacy to get the drops that were called in. NHL was NOT happy about this. He recalled the last pinkeye that he had just a month ago. 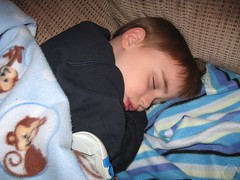 Yesterday I literally sat on him to get the drops in. Sure he may only be five, but man the kid is strong. When he went to bed his eye was really red and we warned him when he got up it may be stuck shut. Sure enough at 11:00 he woke up and it was crusted over. It happened again at 6:00 this morning. I am worried because his eye looks really bad after 4 sets of drops now. The worst part, I am not sure if a bump/abcess like object is forming under his eye by his cheek bone. I will be keeping a close eye on it now and see how it goes. 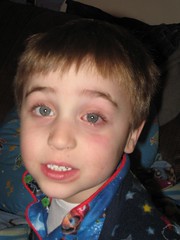 Susan, I promise I will do something even more special ASAP. For now I must work on wiping eye boogers and washing our hands and everything else in the house. WIth any luck Thanksgiving break next week will help to wipe out the pinkeye that has invaded NHL’s classroom.

« Letting part of my baby go
To my sick little monkey »