Ugh! The weather outside is going to be beyond frightful for the next 24 hours. I am not too sure why I am surprised about this. It is December, and I do live in an area known for snow, ice and freezing temperatures. I suppose I was hoping that the little bit of frozen precipitation that we received Sunday morning was just a cruel joke. 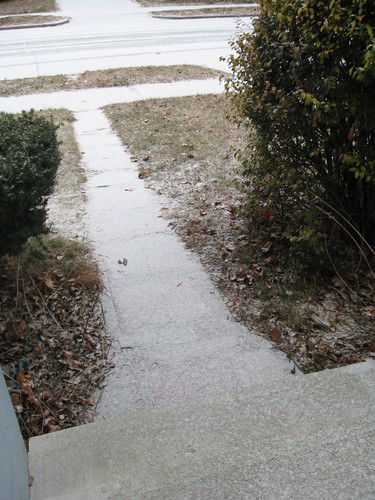 I guess the joke was on me. Nothing really stuck around on Sunday, just the cold temperatures. However, it seems to have been a prequel of things to come for today into tomorrow. Kindergarten kid just left for school with JL and there are already flurries in the sky. Much to my horror JL mentioned that the walk way is already slick.

The meteorologists are predicting 3-5 inches of snow in our area. That is really nothing, but the snow is the least of it. This will not include the severe icing that is also expected. I would be fine on the road driving in this weather if I was alone. Call me paranoid, but I worry about other drivers losing control and not playing it smart on the ice. Cars are not meant to drive on ice and this time of year is a rude reminder of that.

I will leave extra early to pick up the kindergarten kid this afternoon, but reports now are saying that the icy mess will really be bad at that point. Of course once back home with the boys I will then have to worry about JL coming home from work. His commute is pretty far and over a lot of bridges that will freeze up more.

Ah, just the life of a worry wart during snow season!

P.S. Do not forget to enter in my Memories of my childhood – Giveaway