JL and I have been married for eight years now. Over the years, his parents have only come to visit for day trips. My father-in-law refused to leave their dog at a kennel. It has been frustrating over the years for JL because they have missed out on so much with the kids. NHL was their first grandchild and he has only seen them a handful of times. Even more telling, the other day he had to be reminded about what he calls them.

Not too long ago, my in-laws dog passed away from illness and old age. Years ago, they had promised that they would come to stay for a weekend as soon as they no longer had their beloved dog. True to their words, when the dog passed away they asked if they could come here the weekend that we were scheduled to visit them. We were floored! Sure we thought they would follow up on this promise, but we never thought it would happen so quickly.

So, Thursday evening my in-laws arrived. They spent the long weekend here and stayed at a hotel not far from us since our house is really small. The visit was nice, but it was almost ruined mid-day on Friday. Friday, JL had to run into work to deliver some things to co-workers and fix a problem. While he went there, my in-laws, NHL, JSL and I went to the park for NHL’s tennis lesson. It was interesting listening to my in-laws. They were floored with how much NHL is a mini-JL. Apparently, many of my big kid’s quirks are exactly the same as his Daddy was when he was little. Makes a lot of sense, but they had never told me this before.

After tennis, we met JL back at home and went to lunch. We had an amazing lunch at an Italian restaurant. From there, we met my father at the car dealership. My father-in-law wanted to look at some cars to possibly replace his second car. While they were chatting with the saleman, the boys and I were walking around looking at fish in a little indoor pond with a waterfall. JSL was following NHL and suddenly, CRASH! JSL went face first into the floor, just missing the bricks on the pond area. When JL picked him up off the floor he howled. The agony in his screams brought back memories of a night in March when he fell on his face running.

JL moved him into the light so I could check his mouth. Immediately, I saw a pool of blood in JSL’s mouth. At a quick glance, I could see his teeth seemed fine, but there was a HUGE gash in his bottom lip. It was pretty obvious that he had bitten it when he fell. We had to try to assess how bad it was quickly. NHL went to get my father to come and help. Other people heard the little guy screaming and helped us to get some ice. We went to the bathroom to try to stop the bleeding. By the time we had ice, the swelling was really bad. I went to the car to get water for JSL and some motrin. I knew he would be hurting and need it to help the throbbing and swelling.

Thank goodness we did not need to head to the ER for a fieldtrip with my in-laws. JSL fell asleep in the car on our way to the mall and was clingy the rest of the night. He only ate challah for dinner, but was able to nurse and use his pacifier. So far we still think his teeth are fine, but wil try to get more of a look in a day or two when he is not as swollen and in pain.

Here are two photos of the little guy from the weekend. The first is Friday at the tennis lesson before the accident . 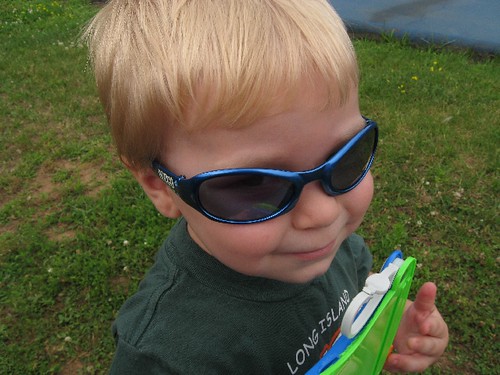 Now a photos of the little monkey Saturday night a little more than 24 hours after the fall. 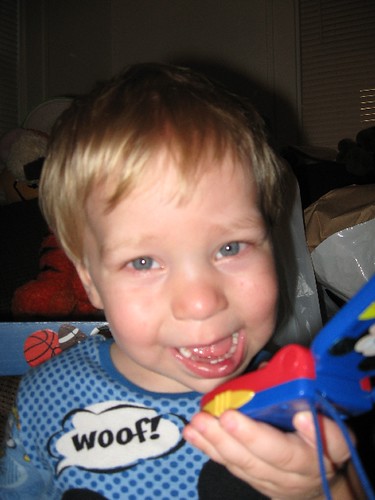 Oy. . . boys certainly do know how to keep their parents on their toes! More about our weekend with JL’s parents coming soon.