As the Mommy of two little boys, I am quite familiar with dinosaurs. I’ll admit it, even as a little girl I was fascinated with these amazing creatures that roamed our planet. I still remember my clay model dinosaur that I had to made for a report in second grade.

NHL has been fascinated with dinosaurs since he was around two years old. For quite a while, we watched a lot of the cartoon Harry and the Bucket Full of Dinosaurs. We have read a ton of dinosaur books, done a dinosaur birthday theme where I made a volcano cake for the dinosaurs to parade around.

Recently, the Walking with Dinosaurs live show came to our area. We toyed with whether or not to take the boys to the show. Eventually, tickets came our way and the four of us went together. If you ever have the chance to go please do. It is worth the money to see this arena spectacular. Yes, the dinosaurs were loud, but the kids were too fixated on the gigantic creatures towering over the audience below. The information in the show is amazing. Our son loves the fact that dinosaurs are related to birds. As an adult, I loved the mix of the history, dinosaur facts and humor that was included in the show. 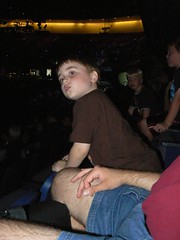 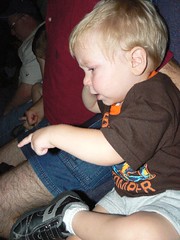 Before we saw the show, we happened to catch a making of Walking with Dinosaurs on PBS. We saw the long process that created these phenomenal life-like dinosaurs. Every detail was put into them and it showed. The night before the show I Tweeted to see if anyone knew about taking photographs during the show. The next morning I had a Tweet from DinoTalesByKari with the answer. Kari just happens to be a Voodoo Puppeteer on the Walking with Dinosaurs North American Tour (who also blogs from the road). She told me that photography is permitted so long as no flash was used. You have to love Twitter and Kari too!

I was a good girl. Before the show I played with our camera to get the setting the best I could. The arena was quite dark, but I still managed to get a few good shots. Here are some from the afternoon we went: 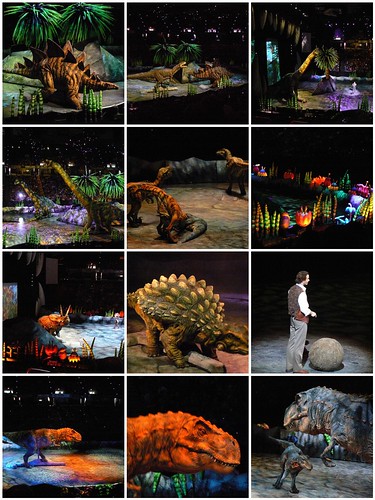 Inspired by the dinosaurs, my question for this week is:

What is your favorite dinosaur and why?

For the record, I have always had a soft spot in my heart for Stegosaurus. Not sure why, but I was always intrigued by the armor and beauty of this dinosaur that I never did a report on in second grade.

Thanks to Kailani at An Island Life for starting this fun for Friday. Please be sure to head over to her blog to say hello and sign the Mr. Linky there if you are participating.