For our honeymoon, just over eight years ago, JL and I went to Walt Disney World. When we were making our plans, one of the must sees was the fairly new Cirque du Soleil in Downtown Disney. La Nouba tickets were quite  difficult to get, but we snagged some great seats. As soon as you walked into the specially designed theater you were transformed into another world. The show was like no other either of us had seen before. The performers were amazing and put on the show with such gusto. We immediately became fans of Cirque from that moment on.

When we went to Las Vegas in December 2002, we met my Aunt L, Uncle J and Cousin M there. We all agreed that we wanted to see "O" at the Belagio. This show is the one that takes place around a specially built theater with a pool in it. Tickets for this show were and still are extremely difficult to get. I managed to get some for one of the nights we were there. It was fantastic and well worth the price of the show. On Christmas Eve, we had no plans and went to the box office at our resort to see if there were any tickets. We literally walked up right after someone canceled on two seats for Mystere. We quickly bought them and saw our third Cirque performance. Mystere did not disappoint and became my favorite of the Vegas trip. I loved the clowns in the show and the humor involved. Of course, the seats were wonderful in the specially built theater.

It has been many years since we have had the chance to see another Cirque du Soleil. Right after JSL was born something came to our area, but was not a real Cirque du Soleil. It was more about the music and dance of the show. We opted not to go and see that. Yesterday, my father called and said he had tickets to see the show here. Surprise!  Of course, since my parents were going we had no babysitter. 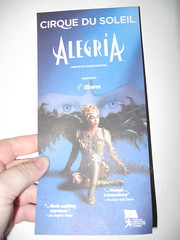 My wonderful husband agreed to be a sweetheart and watch the boys, so I was able to go and see Alegria this evening.Oh my! From the moment we walked in and saw the stage, I knew it would be wonderful. 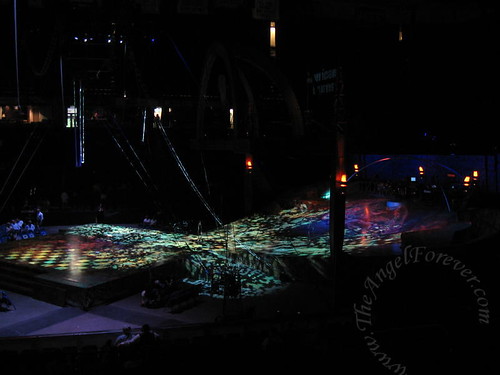 There is just something about the costumes, music, lighting, clowns, performers that combine to make a truly unique masterpiece. The director Fanco Dragone and his troop continue to amaze me each and everytime.

My question this week:

Have you ever been to see a Cirque du Soleil show? If you have,  what did you see? If you have not would you like to go one day?

Now I will be off to dream of magical places in far off lands and more Cirque du Soleil performances in my future with hubby next time.