As I sit here and type this, I am battling some sort of virus. I do not think it is the flu. I have had a horrible headache, body aches, chills and a fever. No congestion, sore throat or the like YET. Being sick on Yom Kippur was rough. Hubby went to services and the boys stayed home with me. Thanks to the television and toys, they were happy. At points, they came to check on me, and I went to check on them.

Still in the back of my mind, I worry and do not have time to be sick. I worry not only about TechyDad and NHL catching what I have, but I am particularly scared about JSL. The little guy had a febrile seizure, stopped breathing and turned gray in February 2008. He was hospitalized for four long days. A little over a year went by and we thought we were safe from a repeat. The reality was two additional febrile seizures in a 30 hour span of time in March 2009. 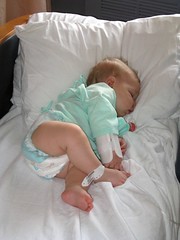 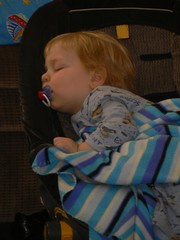 In August, when NHL went to the doctor for his physical the office already had their flu shots. The three of us (TechyDad had his at work) were ready for our shots. When the nurse came back in, she had to report that they did not have any of the vaccine for children under three years old. She told me to call back in mid-September to see if they received their shipment.

October is quickly approaching and still no flu shot for JSL. Each day it scares me because he is quite vulnerable if he catches something with a high fever. Going to the ER on Friday scared me even more since almost everyone was coughing and so very sick. I have now done some more investigating to try to find out where I could get JSL a flu shot. The short answer, there is no location in our area that has them for children under three years old. According to the Health Department, they have not even been able to get any. When I asked the nurse what the hold up was, I finally received an answer. She told me that the federal government told the drug company to halt production of all of their vaccines and to switch gears to produce the H1N1 vaccine.

Yes, the H1N1 is a very serious virus, but so is the regular flu. People forget that the flu kills thousands of people, including young children under three each year. I can not understand why they would stop producing the vaccine that is used for children if there was not enough for the majority of the population. My phone calls also included a pharmacy where an amazing pharmacist did even more research. She called the company of the flu shot and was told that they will not be able to fulfill any new orders until 2010-2011 – OY!

Please understand that I am not downplaying the H1N1 virus at all. As a thirty something adult it scares me a lot. This flu is attacking and killing people in my age group the most, along with kids that are the same age as my children. I understand the gravity of the situation, but I think perhaps some of this was done the wrong way.

Now I must sit, wait, and pray that my little guy stays healthy. The nurse at our doctor’s office told me today that they will likely get the pediatric flu vaccine in by the end of October, after the H1N1 vaccine will be released. So with any luck, he will get that it in the next month.