Monday morning I went to the doctor to get my lungs checked. I was really having a tough time with my asthma thanks to the illness from the previous week. The doctor said that she was 99% sure I had the flu, likely H1N1. Of course, I expressed my concern about hubby and the boys getting what I had. She was worried about NHL because he also has asthma, but particularly worried about JSL due to his febrile seizure tendencies. She told me that she was going to grab his chart and give me a prescription for Tamiflu to have on hand. She said the minute he got a fever and started having my symptoms to get the script filled.

Tuesday night hubby was not feeling so great, but still no fevers. The little guy fell asleep peacefully in my bed. 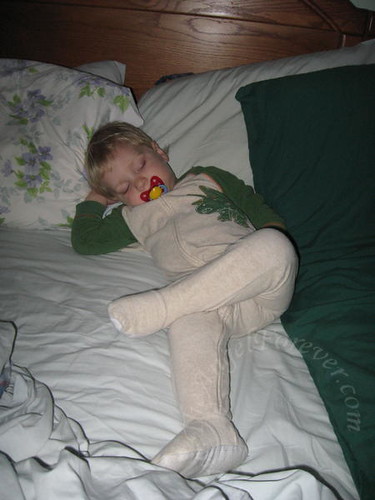 JL and I kept going in to check on the little guy because he was super restless. We would find him at one end of the crib and then the other. It dawned on me that we had to check his temperature. Just before midnight he stirred again and was cool. A little before 2:00, JL heard horrible breathing noises on the monitor. He went into the boys room and JSL not only sounded horrible, but was burning up. We quickly took his temperature to confirm that he had a fever.

I went to the computer to find a 24 hour pharmacy that had Tamiflu suspension since we had the prescription. I finally found one and my parents were lifesavers and went to get the script. At about 3:00 JSL received his first dose of Tamiflu. About 30 minutes later he was making horrible sounds again. We ran him into the bathroom just in time to well toss his cookies. This happened again about 30 minutes as he was almost asleep. The poor kid had so much mucous he could not stop gagging and threw up.

Thank goodness the next dose of Tamiflu went much better. We did it on a full stomach, with mucous medicine in him and everything stayed put. Two days later JSL’s fever went away and by Friday his nose was hardly leaking anymore (just red like Rudolph). Last night he was happy and running around before bed. At about 9:30 we heard horrible barking sound and gasps for air coming from the boys room. It was JSL and he was trying to sleep through it. We brought him into our bed to prop him up more and tried to keep him comfortable. At 3:00 in the morning he was really bad. It was time to see if a steam room treatment would help. It worked nicely and he slept breathing much more comfortably until 8:30.

This morning he is breathless, like I was Monday when I went to the doctor, and has the barking cough. We put in a call for the doctor to see if we should try nebulizer treatments or something else. Meanwhile the little guy is super cuddly. 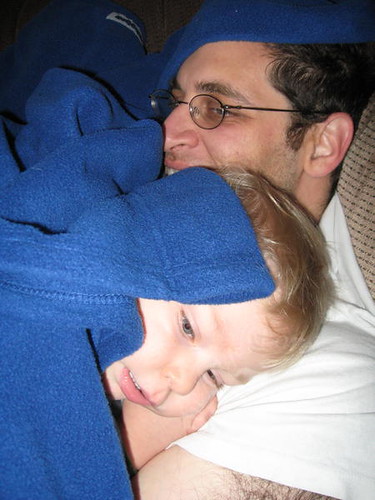 Hopefully we can do something today to make him breathe easier and not have another horrible night.