The days of children napping in our house are pretty much over. When someone takes a nap in our house, it usually means we just got back from Walt Disney World, or illness is lurking. Stuffed friends like Agent P and Perry may be put down for a nap, but the rest of us are not usually this lucky. 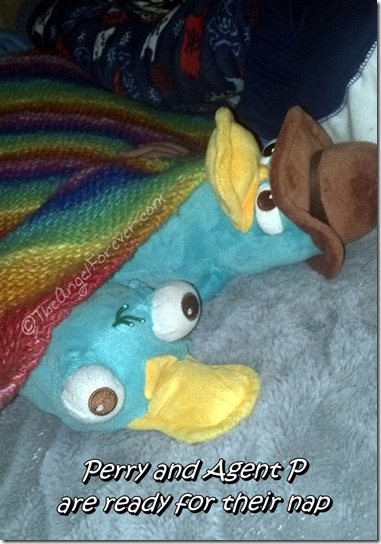 This week has been different. NHL, 9, has napped multiple days over his winter break. The first day he had a fever, but the other days he seemed fine. Perhaps he is ready for a growth spurt and just needs rest.

So my question to you this week is inspired by the recent siestas:

Do you like to take a nap and why do you have a preference?

This week, we had to head to the doctor to have something checked out. It was not an expected visit. Since we were tossed in right before lunch, I made sure that you took some items with us to keep busy. 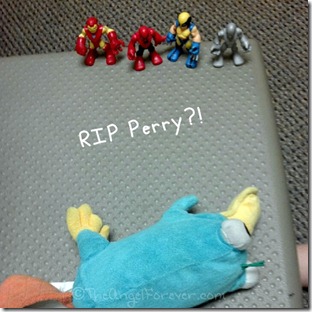 I think you may have been a bit upset at waiting for the doctor. I do not remember what the story was with this set up, but Perry was not looking too happy at the time.

Once we were finished at the doctor, we went to Target to look for some presents for Daddy’s birthday. While there, we noticed some new learning games for your LeapPad. We just took it back out the other day and you love using it to really learn your letters and sounds before kindergarten. The best part, the store also had an AC adapter to use so we do not have to fuss with batteries when home. 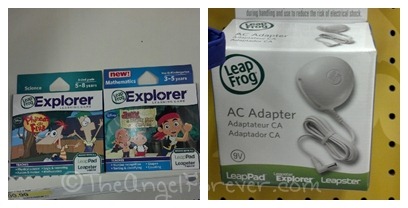 We immediately bought the AC Adapter, but held off on the games. Later on, you and I went back out to the store to look for presents for Daddy and NHL. We eventually bought the Jake and the Never Land Pirates game for the Explorer as something for the next doctor visit. 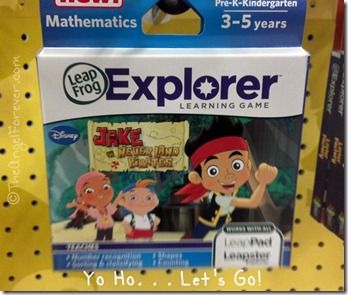 It was definitely a splurge, but you really love Jake and need games that are better for you (some DS and Wii ones are so frustrating). This certainly fits the bill and I know it will help to take your mind off of things a bit. 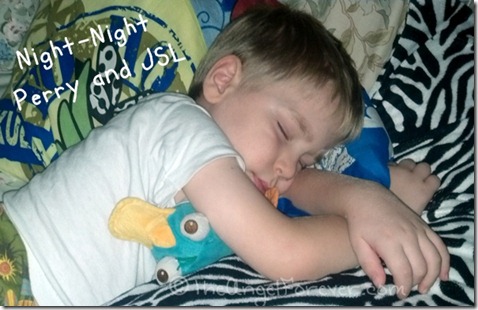 I promise, we will get through this stressful time. Thank goodness, Perry was fine and managed to snuggle with you that night in bed.

Tuesday Tales – I’m Not Tired Yet!

Raise your hand if you are tired from lack of sleep thanks to the clocks springing forward. . .

Imagine me sitting here waving my hands wildly! Although extra hours of sunlight are a wonderful thing, they wreck havoc on the sleep cycles of the kids in the house, which transfers over to the adults. Their bodies still think it is earlier, the sun is out, and they do not want to settle to get ready for bed. The timing on a rerelease of a book written and illustrated by Marianne Richmond could not have been more perfect. 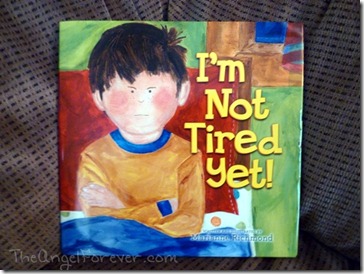 As the mother of an eight and almost five year old, I have heard a lot of excuses from my boys on why they are not tired and/or do not want to go to bed. I have to admit that NHL and JSL have very active imaginations, but nothing quite like Ralphie. 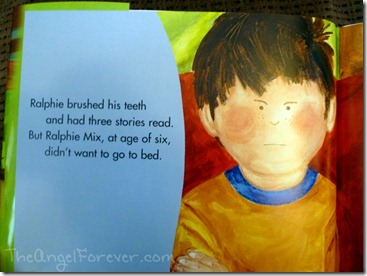 Ralphie is a six year old little boy who is the star character of I’m Not Tired Yet!

He and his mother allow us to watch as they participate in their sweet bedtime routine. As we see from the start, Ralphie is not interested in going to bed. Although his mother is aware of his strategy to prolong his wake time, she engages in an adorable play with words with her young son. Together, they imagine multiple animal visits while allowing for time to kiss, hug, poke, and play before finally settling down for the night.

One example of Ralphie’s favorite animal is the polar bear. When he says that he can’t sleep because of a mosquito buzzing in his ear, she quickly suggests polar bear cuddle time. Sure enough the beautiful illustrations from Richmond allow us to see the sweet embrace of mother and son as polar bears. 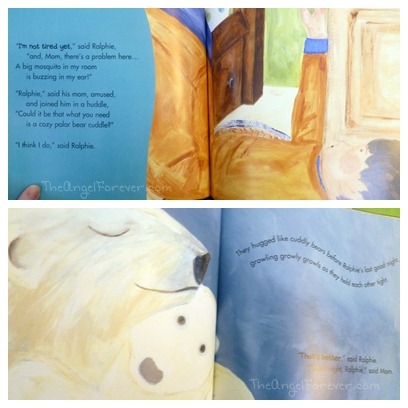 Of course, children will see the repetitive nature of Ralphie’s mother saying good night to him and something cropping up soon after. Then, as his mother is about to leave, something seems to come to Ralphie’s little mind that requires his mother to stay a little longer.

When I read this book with JSL (4), he curled up next to me to listen to the story. He loved that Ralphie was young, but not too little. What I really liked was how JSL immediately wanted to try the fun items that Ralphie and his mother were doing in the book. We were apes, we did fish kisses, and other adorable items that did not get my little guy too amped up before his bedtime.

I believe this may have been the first time we have read one of Marianne Richmond’s books, but will not be the last. JSL has already asked to check into some of her other titles to read together. Ending the day with some laughs was a definite plus for us.

There is nothing better during the cold months than to curl up under a cozy blanket and read a book. It doesn’t matter whether the book has pages to flip, or is found within my Kindle – it is just as relaxing. All that I need are my newly knitted blanket and current book. 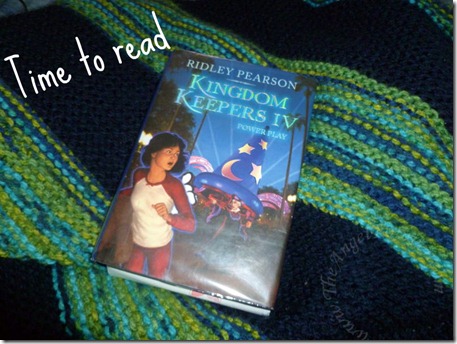 I am about half way finished reading Kingdom Keepers IV – Power Play by Ridley Pearson. I love these books and have written about them before. Although they are not specifically written for adults, I enjoy them because the story puts me into the magical world of Disney. There is something special about favorite characters battling the evil Disney Villains like Maleficent and Cruella De Ville.

Sunday afternoon, the boys were busy playing Nintendo and it seemed like the perfect time to catch some more of the Kingdom Keepers adventures throughout Walt Disney World. I read for quiet a bit and then I felt like I was being put under a spell. Of course, the Evil Queen was not in my house. I felt the need to close my book and eyes.

After I woke up from my nap, I joked to TechyDad. I think there is something to this blanket. Several nights this week, I would curl up on the couch to sit and watch television or read, only to fall fast asleep under the blanket. 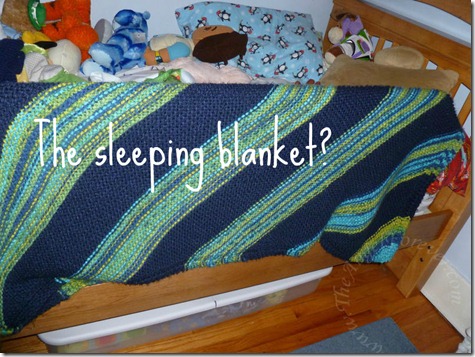 Does this cozy, soft, warm blanket have special powers to make those who curl under it forget their mission to read or get work done?

After TechyDad and I came up with this theory we asked the boys to test it out, but for some reason they refuse to try it. Of course, I still am going to test it with them one of these days – insert evil laugh here! 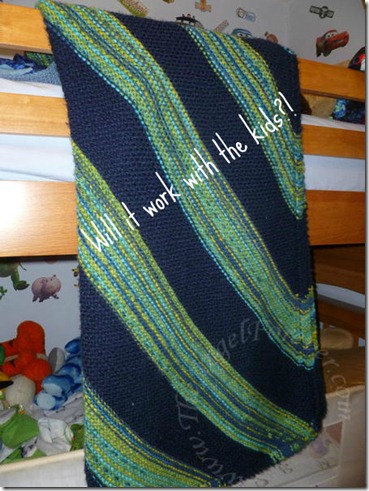 Do you own a special blanket, pillow, or something else that just seems to make you fall asleep? Makes me wonder if the baby blankets like this do the same for those that have received them?

Bunking it for a Week

Today marks one week since the arrival of your new bunk beds. It has been a challenging week. Change is hard and this was definitely a big change for all of us. Not only did bed placement move for both of you, but night time routines became different. 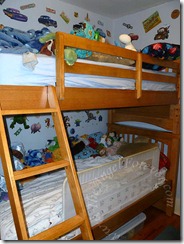 Daddy and I could not longer sit on the edge of NHL’s bed to make sure you were quiet and went to sleep. No, going to the top bunk was really an option. We realized that this caused some hurt feelings after day three when you declared that you no longer wanted bunk beds and wanted your own room. JSL was also upset about not being about to jump into NHL’s bed to give him a hug before bed. Giving up is not an option. We explained to both of you that this was a big adjustment for the two of you, Mommy, and Daddy. New routines and ideas had to be brainstormed to help both of you with these items.

Had the two of your stayed in your room when we were making the beds, you would have heard some complaining. This is not an easy task and will certainly be something that I cringe about. On Friday, while preparing for the furniture store to come back and fix something, I had to remove everything off the top bunk. I completely forgot where I was and stood upright on my knees. Ouch – hitting your head on the ceiling hurts! I think we need some warning labels on your top bunk NHL. 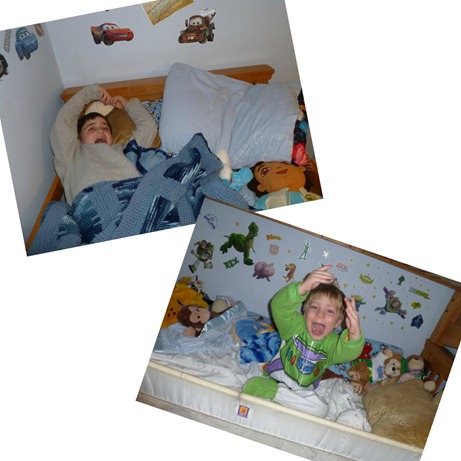 Thankfully, once you are asleep, you both seem very happy and well rested. We all need to remember that it is going to take time, lots of hugs, and patience to get used to our new lives with bunk beds.