No school and some Halloween Photo Fun

As you probably know, today is Election Day. The schools in our district are used as polling places, so there are no classes today. Instead, we signed up for parent-teacher conferences and were able to get NHL’s report card. So we packed up the boys, our pumpkin chocolate chip cake to donate to the bake sale and things to keep the boys busy.

At 8:00, we met with NHL’s teacher. He is doing at or above grade level in all academic areas. The areas that he needs to work on are all in the behavior/social realm and developmentally appropriate. One of the items mentioned is that he likes to tell the teachers what other classmates are doing. So we have to reinforce what being a tattle tale is and to mind your own business.

At the end of the 15 minutes, NHL’s computer teacher came to chat with TechyDad. He also happens to be the head of the Chess Club that NHL is a part of. They talked for a few moments about what we need to do to channel NHL’s clear mindset/strategy for Chess. After this, we went to drop off the cake to the cafeteria and went on our way.

We went to vote and saw Papa at work while there. Then we were off to try to get a few things for lunch at home and a chess game for NHL to practice at home.

When we came home, the boys played for awhile. Then, while showing NHL the photos from Halloween, I decided to go into Picnik within Flickr. He wanted to play around with one of the photos of him in the Luigi costume. Check out what NHL made (with a little assistance from me): 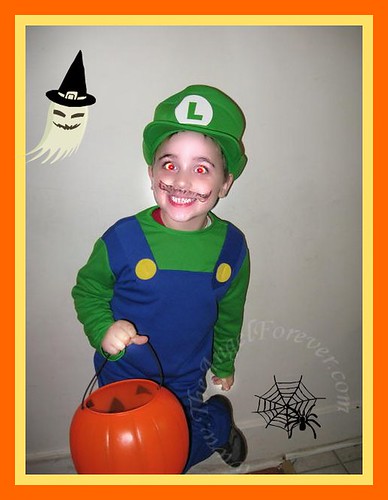 He decided that he wanted orange eyes, vampire skin, a ghost with a witch hat on and spider on the web. Then he helped to pick out the colors for the frame on the picture. He thought it was really fun. I think the only complaint he had was I did not have a Premium membership for some of the other fun Halloween features.

When NHL was done, I had some fun with a photos of TechyDad with NHL. Here they are as Zombies: 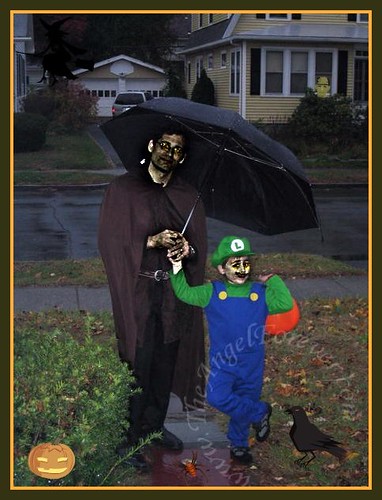 I will post some of the real Halloween photos soon. Before I go, I was wondering, do you use Picnik? If you do, do you have the Premium membership? Just curious because I have been toying with it for a while now, but not really sure what the paid version includes that I am missing now.