Last night, if you followed me on Twitter, a panicked Tweet went out just at about 9:00. As other people were settling in to watch the last episode of Lost, I was calling my parents to quickly come to my house.

After our fun day in the sun at The Great Escape, the boys were exhausted. We ate dinner, TechyDad gave them baths and it was time for bed. NHL was in bed and JSL was still getting settled. After TechyDad brushed his teeth, he went to get his sippy cup with water. I was getting something on my side of the bed and the lights were out. JSL came running into the room and WHAM!

I could quickly see that he had a gash in his bottom lip. TechyDad came in and helped me to take him into the bathroom to try to see what was going on. JSL was beyond upset and did NOT want anything to touch him. We obviously needed to check his teeth, face and head. I asked if he would put ice on the lip to make it feel better. Thank goodness, he agreed. I got a paper towel to put on it and we got the bleeding to stop.

Meanwhile, I had called my parents. With NHL in bed, I was not sure if we were off to the ER with the little guy. My father left Lost and rushed over to our house. He definitely helped to calm JSL down and we were able to see that the bleeding had stopped. Looking into his mouth was another story. I was in a panic imagining the worst about his teeth. JSL refused to go into our room and wanted to stay on the couch. At a little after 11:00, he finally agreed to come and rest/sleep with me. 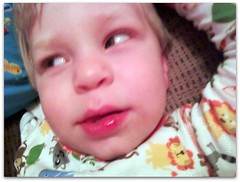 This morning, TechyDad and I held JSL down and I was able to look in more. I could see bruises all around his two top front teeth and it did not look good. Luckily, we were able to get into the dentist this afternoon. Here is a photo of the little guy asleep in his stroller as we waited to see the dentist. 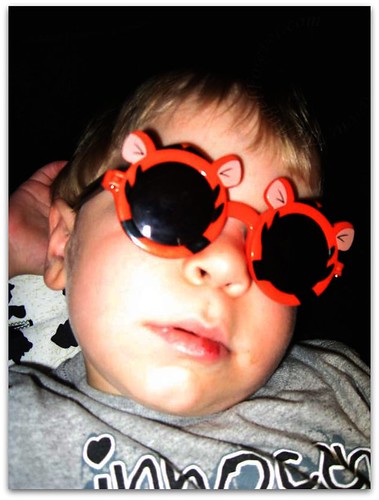 I love our dentists – can not say enough wonderful things about them. Dr. N reassured me that we did the right thing with ice and coming in today. As he slept, she moved his upper lip and touched his teeth. Immediately, I saw one move. My heart broke momentarily. She could tell and told me not to panic. When she got the little mirror to check under the teeth, JSL woke up and was not a pleased patient. She got a look inside and said it was bruising that I saw. She asked if I would be ok holding him for an x-ray and I agreed. It took the two of us holding him on me to get it, but it worked. It looks like there is no root damage or anything more to the tooth.

For now, we have to watch and keep it clean, cut his food (no biting into things) and go back in a few weeks for his regular check-up. Looks like his three year portraits will be waiting a little while. Oh and once again, I am requesting a little bubble for JSL because the kid has given me one too many scares in his three years.