No matter what happens, I always cringe when it is time to get portraits done for the boys. Last year, it took us two takes to get them done for JSL. In the end, they came out really nicely. Of course, our experience with Sears Portrait – on the corporate level was less than satisfactory. Still, when it was time to go back for JSL’s 3 year portraits, we went back to Sears. Corporate may not be the best, but it is the people in the studio during the session that really matter.

Originally, I had wanted to get JSL’s portraits done the week after his birthday when my mother had the day off of work. That changed when JSL got hurt the Sunday before. We waited for time to heal his lip and tooth. Things were better and I decided to make an appointment before NHL was out of school. We are not sure if JSL’s tooth is going to get worse, so I wanted to get them in sooner rather than later.  I figured try to get it done one evening when TechyDad could go with me. I scheduled an appointment for early evening just about six weeks after his birthday.

Last Wednesday, JSL took a nap and woke up in a good mood. We packed his outfits and props and went to the local Sears studio. At first, JSL was shy with the photographer. Eventually, he got into the groove and was helping to put props into the shot. He really liked playing with the photographer. Our only problem was that he kept running out of the picture as soon as she was ready for the shot. Luckily, she was quick and got a bunch of fabulous pictures.

Here are views from our session. As you will see, they are watermarked from Sears, but I HAD to share them since you can see the character come out of JSL in the various poses. First were some with the giant 3, his favorite buddies and his Winnie the Pooh outfit. 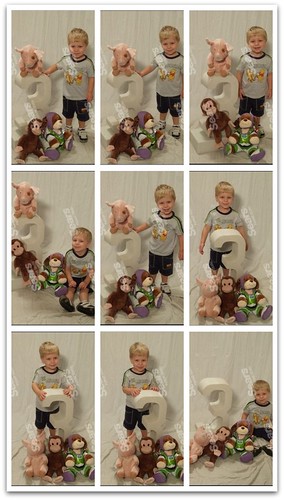 Then, we had a quick change of clothing to sport his new favorite Buzz Lightyear. 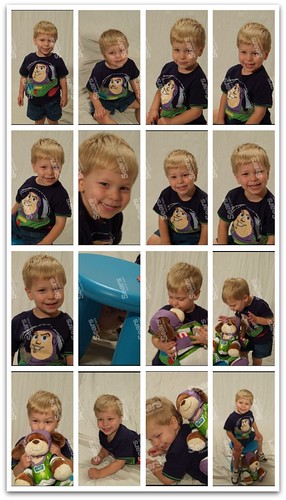 Although there were a lot of pictures that we really liked, we quickly narrowed it down to one with the giant three and one close up shot. In addition to this, we received a free collage that had three other pictures that we had not purchased within it. With any luck, everything will come in properly and not damaged so we can pick them up and not worry about portraits until NHL’s 7th birthday in August.

Do you like getting portraits done? What are some tips that you have to a good session?

Always looking for some ideas since you never know what may happen next time.