Nothing like spending the night of your 9th anniversary on the road with your kids (please note the extreme sarcasm here). That is exactly what we were doing Thursday evening on our way to a long weekend with my in-laws. Not that I have anything against my in-laws, but the road from here to there is a bit nerve wracking to say the least. You see, travel from here to there requires driving through roads that border the Bronx and other parts of New York City, and going over two large bridges. By the time we arrived at the Long Island Expressway, I was curled up in a fetal position with my eyes closed and sprouting new gray hairs by the minute. My biggest mistake of the trip was opening my eyes at one point when TechyDad yelled out "Holy Cow!"  Let’s just say that NYC drivers are rather daring to say the least. Luckily, we arrived safely and got the kids into bed.

Friday morning, we all headed out to the Atlantis Aquarium. We had been there before when NHL was three (JSL’s age) and so much had changed. The boys had a lot of fun exploring things, but both really loved the sea lion show. 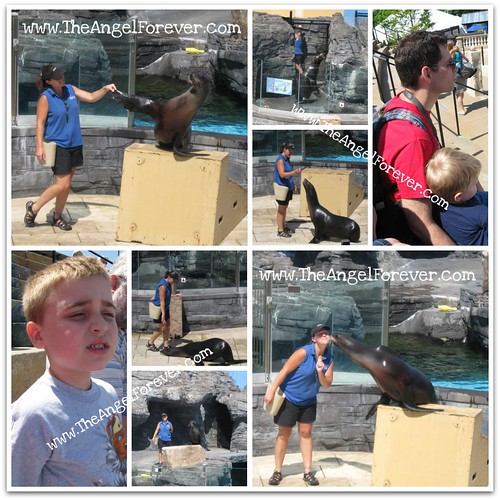 Those were a few of the pictures that I took with my camera. TechyDad took many more of the show, the kids and inside and out of the aquarium. No doubt he will be sharing them and the video of the sea lion doing her dance coming soon.

We had a very nice visit with my in-laws. I did not enjoy myself as much as I could have thanks to my asthma. Usually, I have issues there because of their dog. Lacey has passed away and I actually went there having lung issues. After my sinus infection came and went at my cousin’s wedding, my asthma really kicked into high gear. This seems to be something that happens with any small illness since I had the flu in October. It is safe to say that my rescue inhaler has become my best friend since I realized the cough was really my airways being constricted and needed to be opened from an asthma attack. The heat and humidity outside and even inside really made it difficult to breathe and sleep.This week I am hoping to call my allergy/asthma doctor to get an appointment. Obviously, I need some help getting my lungs up to speed and maintaining them if I get a cold or something else.

On that note, I am off to rest in my nice cool room and enjoy the AC that is making it a bit easier to breathe at the moment. More photos and items to share coming soon.