Sometimes, it is just nice to have a lazy weekend. No real need to go to a location, just sit at home and do things with your family. That was this weekend. I should feel energized, but I think it has allowed my mind to race a little too much about the events for this week.

Yesterday, TechyDad, NHL, JSL and I all stayed in our pajamas. Why yes, it was a glorious day of just doing things around the house and not getting dressed. We started the morning off with some warm, delicious biscuits for breakfast. After that, TechyDad had a bit of the cleaning bug. He organized the kitchen (had to be done for apple baking), cleaned the bathroom, and then helped me to move the couch to get some monster dust bunnies that had escaped.

After lunch, the boys played a new game that TechyDad received to review. There was a lot of laughing, giggling, and strategy going on. While they did that, I opted to get a head start on sorting, cutting, and bagging Box Tops for Education. As the coordinator in NHL’s school, the November 1st deadline is coming quickly. This is what sat in front of me. 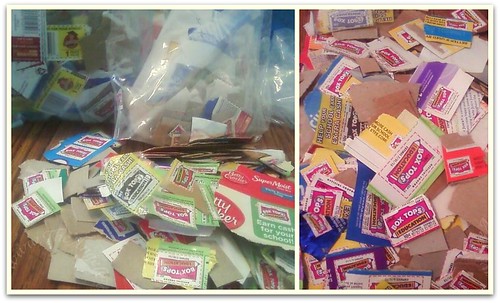 A bit daunting at first. The nice part, I was able to listen to a lot of The Help on my MP3 player while I did this project.

So how many Box Tops do you think are here? 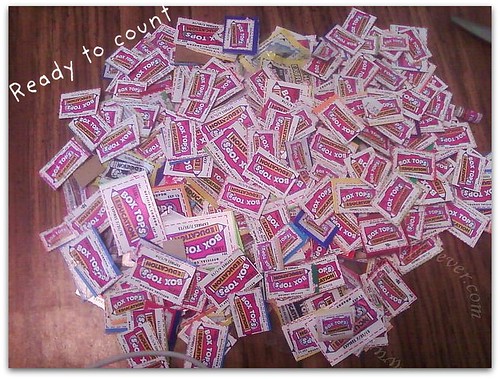 In the end, there were 620 in that pile alone. It all adds up and will go to good use at school. So, if you have any extra Box Tops for Education and do not have a school to donate them to, just let me know.

The boys also watched Disney’s Alice in Wonderland, then we had dinner and the kids went to sleep.

Today, NHL went to Hebrew School. TechyDad went with JSL to the grocery store to get some items for the week. Then he came home and put up a crock pot of applesauce. After lunch, I was upset about frogging a knitting project and did not feel too well. I took a nap while TechyDad made some apple muffins.

Sometimes, you just need a slow weekend at home to catch up on family time.

So what did you do this weekend before Halloween?