Where did my car go?

As everyone knows a giant storm hit the northeast of the United States Sunday into Monday. For days we were told it would not come into our area, then it suddenly hugged the coast a lot more and BAM – 10-12 inches of snow were here. The difference with this storm was the drifting snow. Snow banks around the house were several feet high in sections. At one point I looked outside the window and could barely see my car. Although not a great photo, it does get the point across. 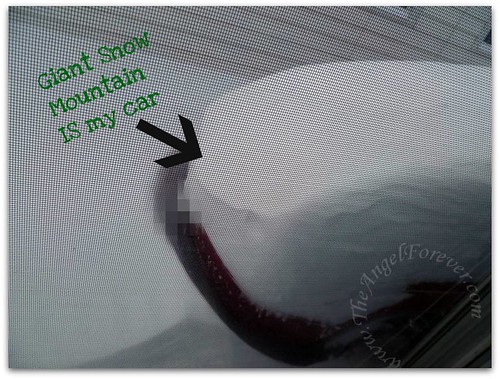 The wind had taken all of the snow from my neighbor’s roof  and planted it on and around my car. Thanks to this, I knew I had to go outside to get some photos. I got my snow gear on and went on an adventure. Please be my guest as I show you around our house.

We will begin with a view of the front snow piles and yard:

Then it was time to check out my car. Here are views of the back and front. You can see where all of the snow from the roof landed. It was tough trying to get there thanks to the depth of the snow.

After that I opened up the fence to shovel a path to the back door. Here is the yard:

I did not expect to stay outside long. After being in bed sick for several days, I knew I shouldn’t do much. Of course over 30 minutes later, I was shoveling out a path from the back of the house to the front. Chalk that up under a dumb moment. It felt good at the time, but later on I knew it was a mistake. TechyDad also posted some photos of his time out in the snow.

So did you get snow by you? If you did, how much? If no snow by you, would you like some?

The wind is still pretty bad today. If it settles down I have a feeling the boys will demand to go outside and play in the snow.

« Snowy morning and beyond
Time to convert the crib »