The Good, The Bad, The Ugly – 10th Anniversary Edition

As I have mentioned before, Friday was my 10th Anniversary with TechyDad. He went to work, NHL went to school for his last half day, and JSL and I stayed at home to do some cleaning. We had someone stopping by later in the day to check on a clogged bathroom sink. Thanks to this sink, we were forced to wash hands in the bathroom tub.

The day did not exactly go as planned. You see, thank goodness the plumber came early. He showed up at 11:30-ish instead of 2-3. I had to leave shortly after to pick NHL up from school. When he left, we knew we had some large issues. He said he would go to lunch, get supplies, and come back about an hour later to get to work. In the end, he was at our house until about 7:30 at night. Our initial plans were shot and even other items had to be changed. Still, we made the best of the situation.

We went to my parent’s house to have cake with the boys before putting them to bed there. Thanks to fumes, we could not stay in our house. Here are the delicious cakes that we had 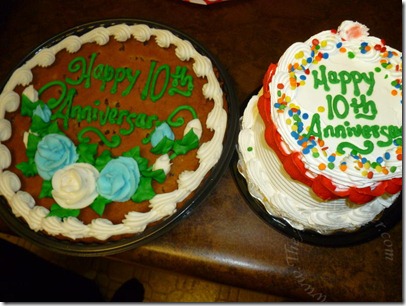 Once the kids were FINALLY into bed, TechyDad still wanted to head out to dinner. Since it was almost 9:30, we had limited choices. I recalled a new Sushi place not too far away, so off we went to Mr. Fuji Sushi. Our experience at Mr. Fuji’s was amazing. The food was delicious, the people there super nice, and the atmosphere wonderful. Since it was so late, we ordered two appetizers and three sushi rolls to share.

To start we had Age Tofu and Vegetable Tempura 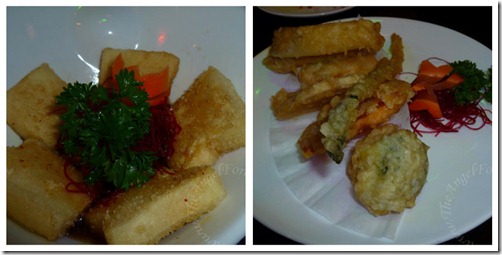 Then we had a Philadelphia roll, Avocado Peanut roll, and Sweet Potato roll 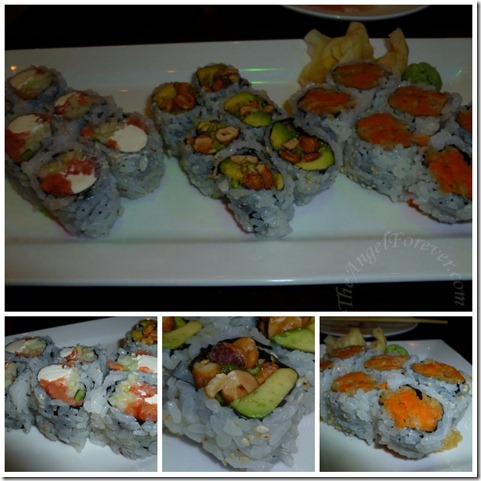 Yes, I believe this is the best sushi I have had in a long time. We will definitely be heading back to Mr. Fuji again soon.

We thought that the plumbing issue would require snaking the pipes. When they tried to do this, the snake refused to go down and kept going up into the pipes instead. When JSL and I left to pick up NHL at school, they were debating a few options.

I went to pick NHL up and bring the kids home for lunch.

When they arrived back at our house, I saw them hauling a long section of PVC pipe. I knew it was the best thing, but I was paranoid and worried about things. As they started to work in the basement on cutting the pipe open, it started to get more complicated. They could not get to the top of the pipe from the basement. Suddenly, wall removal was needed. Yes, I think I aged several years in this afternoon from making big decisions on the fly and listening to the noises in my house. I knew that they were capable, but it was driving me batty.

The guys came back upstairs to give me the news and I immediately knew we made the right decision. You see, the pipe in the basement was nearly closed shut. The old material has basically closed itself shut. I never went to look in the basement until a while later. I gave permission to remove wall to get at the sink pipe within there. The hole got larger than this, but you get the point from this view: 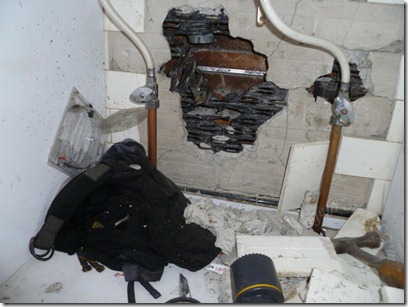 After a lot of power tool noises and labor in the bathroom with the wall and pipe fighting, they finally got that sucker out. Check this bad boy out. Yes, this nasty object was pretty much what was happening down stairs in the basement as well. Here is our corroded galvanized pipe from within the wall: 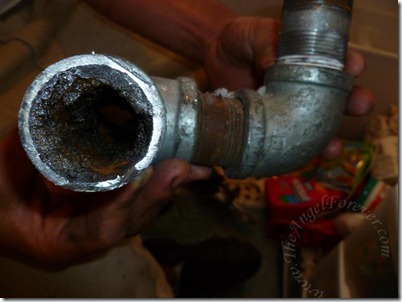 It was not an easy job, but these guys were amazing. They dealt with my paranoia and got the work done and well. They even cleaned up the mess when the tiles on the wall next to the sink spontaneously fell off – no I am not joking. Apparently, they were not put on right by previous owners. This was good under the sink since nothing was ruined getting to the pipes behind the wall. I was too sick at the mess during that time to take a photo. I am also sparing you from photos of the basement pipes and sludge that came out of them. Let’s just say old toothpaste and soap are not pretty nor do they smell nice.

In the end, the pipe is fixed, a few more will need this down the road, and we need a massive bathroom rehab soon. More good news, the pipe works and we have a new faucet that is not leaking. Thanks to spray that was used during the cleaning process on the tiles/pipes, there are horrible fumes in our house. It has been a rough few days and we are so very lucky that my parents are here for us.

So there you have it, the good, the bad, and the ugly of our 10th Annversary!

Psssst. . . if you need a good person for home repairs in my area – just let me know. This work, along with the roof, and broken main water valve were done by the same person. Highly recommend.