Yesterday, at about noon, I sat getting some work done and finishing my lunch. Suddenly, a call came on my phone. It was a familiar number, but I was not completely sure who it was. The minute I heard the voice my heart stopped. The call that I had feared since you went to nursery school had come. The secretary said that you had fainted while out on the playground. It was a cool day and I knew you had not fainted.

I do not remember much from the time I left the house and got to your school. I was shaking and it seemed to take forever to get to you. When I arrived, you were still on the playground. Emergency vehicles crowded the parking lot as I ran over to you. You were hardly moving, up on a stretcher. I put my hand out to you and you were freezing cold. Your body was oh so white with a bit of a blue tinge to it. By now, it had been confirmed – you had your fifth febrile seizure.

The emergency personal and teachers from school were amazing. They knew exactly what was going on. They were able to tell your history, and explain what had happened. Minutes before your febrile seizure, you were running, laughing, and playing with no sign of being ill. When I asked you who I was, you responded with a very weak “Mama” that made me feel better. We rode to the hospital in the ambulance and you seemed to be worse to me. I had to remind myself that the hour after a febrile seizure is always worse. Although I should be a pro at this, it never gets easy and I always forget.

To make a long story short, Nana met us in the ER, quickly followed by Papa and Daddy. They took your temperature about 30 minutes after they had called me. At that time it was 103.8! Your color was coming back and your skin went from cold to burning up. We got you some medicine and waited to see doctors. Three doctors came in over the time we were in the ER and they asked you what hurt and you never complained about anything. They listened to me about hidden ear infections. You were not a fan of them digging in your ears, but thank goodness they did. You had a raging double ear infection. Never did you complain. The doctors seemed to be concerned that it was your fifth febrile seizure and that twenty months had gone by since your last one. I had told them it was at least fifteen months, but the reality was your last one was right before Halloween 2009. 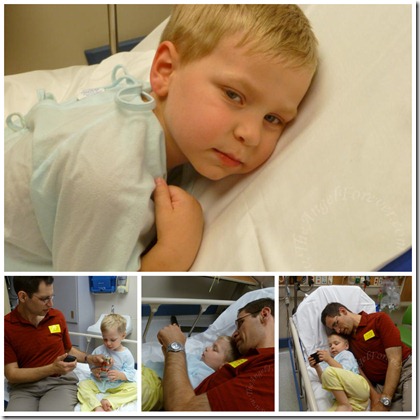 After a few hours, we were told we could go home. We were armed with instructions on what to do. I stopped at school to pick up my car and your things. One of the other teachers was still there that had seen everything, so I learned more about what happened before and during the event that rocked our little world. Then, I picked up your medicine and made a call to your teacher. She had called worried about you and asked me to give you a hug. By the evening, everyone had checked in on you and we thanked them all. They were truly amazing in a horrible situation and I will never be able to thank them enough.

Now, I just hope that you keep down your medicine and things get to be boring for a little while. 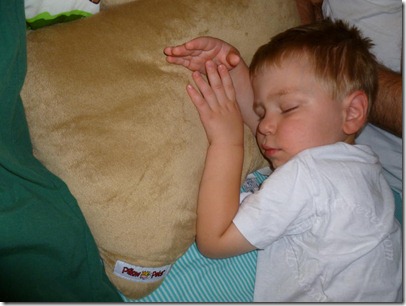 I think we could all use a little quiet and calm time after Friday. Feel better my little guy.