It is no secret that, as a parent, I have become quite familiar with special services for my children. Thanks to NHL’s low muscle tone, he received Occupational and Physical Therapy to work on his fine and gross motor skills. With the hard work of everyone involved, you would hardly know that he once was a two year old that was unable to walk. 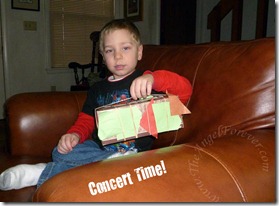 About two years ago I started to battle to get JSL some Early Intervention. His speech was not very clear, but he would “talk” a lot. Sad to say, the system failed us at the start, but has certainly made up for it since that time. In late September 2010, JSL started getting speech two days a week. By this time, he was frustrated, we were flustered, and everyone wanted our little boy to be understood.

We still have no idea why JSL dropped sounds in almost every word. His hearing was fine and other items checked out. It was not simply beginnings, certain letters, or endings – it was all over the place. The little guy’s speech patters were a mystery. Luckily, his preschool knew that he had qualified for services and suggested a therapist to work with JSL. We are so very lucky to have CT in our life. JSL adores CT and we saw improvements quickly. At the end of last year, JSL qualified for summer services and continued sessions this academic year. I do believe that CT is a miracle.

With this burst in speech, JSL has come out of his shell a lot more. He’s so much more outgoing once he gets to know you, and loves to perform song/dance routines. Here is the little guy after his music enrichment class where he made a new instrument. He is singing Shalom Chaverim – the Goodbye song in his classroom.

With recent budget cuts, I do not know how much more time JSL has with CT. More about those cuts and implications for children in New York and beyond coming soon.

Today, I wanted to thank all of the therapists, like CT, out there that work with kids to catch them up to speed before they head off to Kindergarten and beyond. As a parent and teacher, I truly get all of the hard work that they do both on and off the clock for our children. If your child receives therapy, remember to stop and thank their provider for all that they do.