When I start to think about Walt Disney World, one refreshing treat comes to my mind. I immediately begin to imagine myself walking through the Magic Kingdom to Adventureland and getting one of these at Aloha Isle: 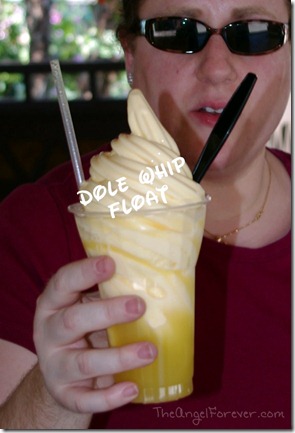 Please excuse the hot, sweaty, and frizzy haired me in the background. That photo of me holding my beloved Dole Whip Float was right after I finished the three hour African Trek. I called the boys and they were over at the Magic Kingdom. I immediately knew the place to meet. We introduced the boys to their first Dole Whip Float and they are definitely fans of this refreshing treat.

If you are a Dole Whip newbie, I suggest checking out AJ’s post on The Disney Food Blog all about the beloved Dole Whips. From there, she links up to additional posts about the topic and even where you can find them outside of Disney parks. Zannaland also wrote about The Great Dole Whip Controversy. Yes, people are that serious about their Dole Whip preferences.

So let’s talk frozen delights at Walt Disney World. Have you had a Dole Whip before and what is your favorite location to enjoy this delicious snacks?