In a few weeks, I will be the mother of a nine year old. This is hitting me hard because, in a year, my kiddo will be in the double digit years. In an attempt to figure out some ideas for NHL’s birthday present, we went out in the rain to Toys R Us. While NHL and I were looking at some school supplies, we noticed someone rather tall coming from behind us. We called for JSL and he came over to get a photo with a very special giraffe. 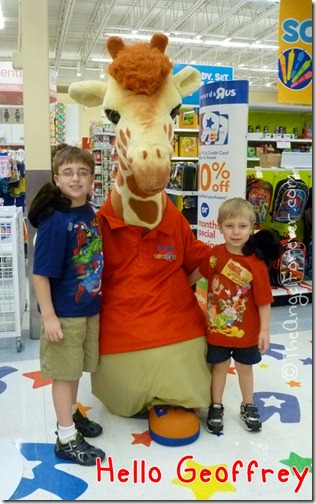 Geoffrey was beyond patient and posed for two photos with NHL alone, and then the boys together. He even got down to their level for a sweet photo. Little did he know that we are big giraffe fans.

While I was looking at things for NHL’s Muppet birthday party, the boys went over to a table to do some coloring. Shortly after I went to look at them, someone else joined the table. 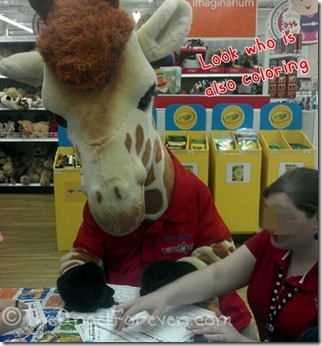 The boys were alone and coloring with Geoffrey for quite a while. I have to say, this is one talented giraffe. He was able to color neatly and stay in the lines. Meanwhile, my little artist was showing his latest style of coloring. JSL seems to be going more abstract these days. Rather than stick with simply blue, he likes to maximize color exploration. It may look like scribbling, but he is very exact about the destination of each color and section it is placed into. 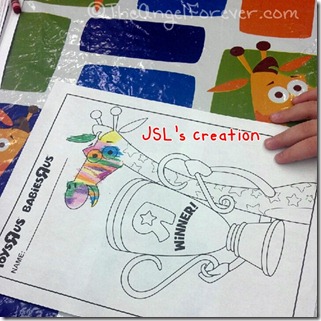 After coloring, we went to explore the store for a little while. NHL gave us a few ideas, some Legos and Nintendo DS games. Still, we need to try to get other ideas before his big day. Until then, I will be switching my attention to TechyDad. His birthday is in less than a week – yikes!

« Jelly Beans in the Name of Science
Strange LEGO Groupings »