My house is eerily quiet right now. Both boys started school full time and I have to admit it is strange. We were together all day the entire summer. I got used to the chatter and voices in the house. I actually do better work when there is some background noise around. For now, Pandora Internet Radio and Spotify are my friends.

For five years, I often wondered what it would feel like taking my youngest for his first day of full day kindergarten. I wrote about NHL’s first day years ago, but it seemed less dramatic in my mind. The morning was calm. NHL was excited to see friends and meet the long term substitute that would be in for his teacher. There were no visible nerves, which makes me know we are in the right school now. Then there was JSL. My kindergarten kid was saying his tummy hurt, that he wanted to go back to sleep in my room, and that he was scared. The strings of my heart were starting to tighten.

When we went outside, it was time to do the traditional first day of school photos. The boys cooperated to amuse me. 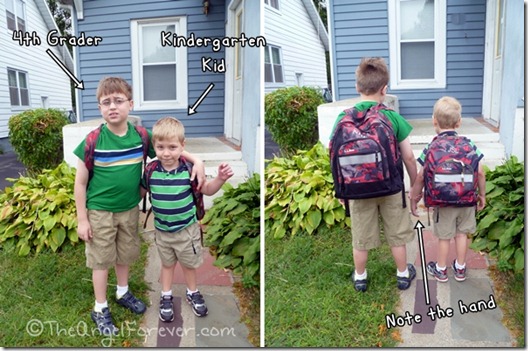 JSL’s outfit looked vaguely familiar. It really made me wonder why. Since I blogged when NHL started kindergarten, I went back to that post. This is the reason why: 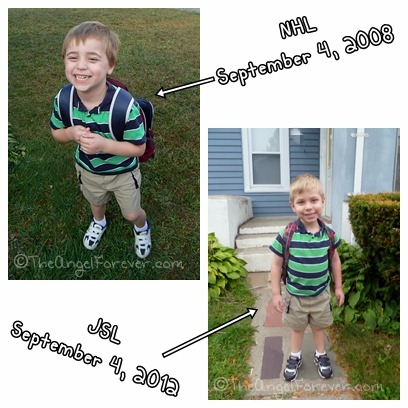 I seriously did not plan that, but it’s kind of funny that I liked the same outfit four years later. Anyway, once we got to school JSL was not smiling as much. Thank goodness NHL was ready to go. We walked him to the back of school and he immediately ran over to say hello to the assistant principal. One kiddo happy and off for his first day of fourth grade.

Then, it was time to take the kindergarten kid to his room. When we arrived in the hall, it was a little confusing. JSL did not want to let go of TechyDad. We were eventually told to head into the room to drop off items into their cubby. When we went back outside of the room, JSL sat next to some other children. The photo below was taken just before one of us ended up in tears. 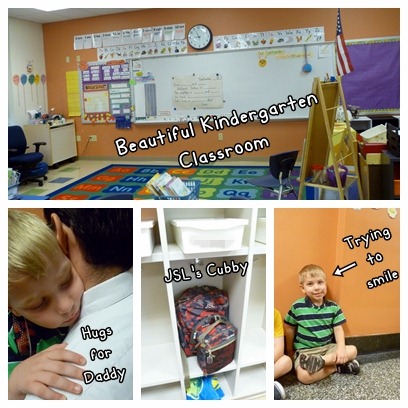 Yes, JSL started to cry. TechyDad followed him into the classroom as he sobbed. I knew we had to say goodbye and leave. After a bit I walked into the room, nodded to the teacher who was trying to help and told her we would see both of them at the end of the day after he rocked kindergarten.

TechyDad went off to work and when I got to my car my tears started to flow. It hit me that things were going to be different forever. My little guy who had been with me since I left my classroom when he was born was going to school. I knew he was going to be fine, but it still hurt knowing how upset he was.

Thanks to some amazing friends, I was ready with something to greet JSL with after school. This is what was waiting for the little guy when he climbed into my car after his first full day of school. 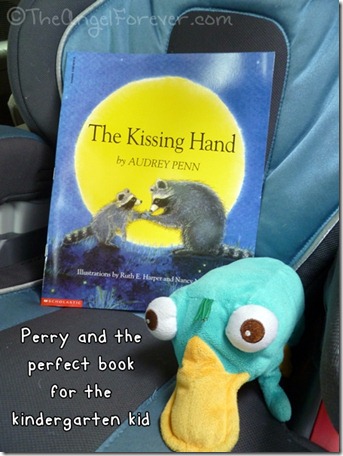 I knew that JSL was familiar with The Kissing Hand and I wanted to let him know that I had forgotten to do this very important item. I did not kiss his hand or have him kiss mine before day one.

We made sure to do this before going to school for day two. There were less tears, but still an emotional morning. I know things will get better. The smile on JSL’s face when he came out and told me kindergarten was stupendous was all that I needed to hear.

So how do you help your children to adjust to a new school, classroom, teacher, or other item that may be stressful for them?