Imagine living in a world where you are not even aware that others do not see, hear, feel, and understand things the way you do. That is the reality for children, like my son, who have been diagnosed with Asperger’s Syndrome. Autism is a reality in our family that we fought hard to figure out. I have written in the past about the long struggle to connect the dots for our son. Getting a diagnosis meant that we had to revamp a lot of parenting styles, rethink how we reason with him, and be bigger advocates at school to address his rights.

My son is nine years old and VERY literal. He is honest to a fault and brags about being a math wiz because he doesn’t get that it can be interpreted in a bad way by his peers. His hunger for friends means that he can be easily victimized by children who take advantage of his being socially naïve. Sarcasm is my second language at times and it has been hard to grasp that NHL may never be able to take it and dish it back to me. To a stranger, my son would probably not catch your attention on most good days. Of course, should he get upset about something and start to cry it becomes obvious that something is going on. NHL’s feelings are raw and something that I wish more people understood. He feels on a level that is pure and not based on trying to butter someone up. When he gets nervous or upset, he get anxious and talks, moves around, and fixates on items. These are all coping strategies and ways that he stims. The problem is that most of his peers and a lot of people in the world of education do not get this. Often times, I forget since this is so new and fresh.

Spaghetti is NOT a Finger Food ( and other life lessons )

by Jodi Carmichael with illustrations from Sarah Ackerley is a must read. My mind is racing after reading the book and all for good reasons. 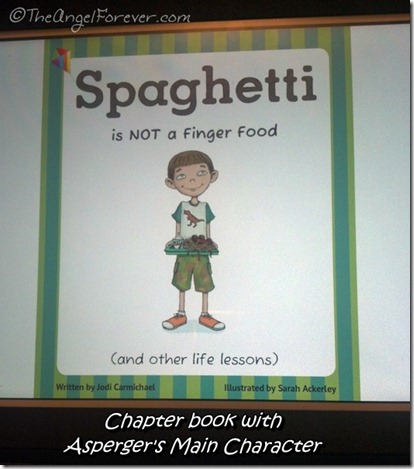 The main character of the book is Connor and we read about segments of a day in his life at school. Each chapter begins with a life lesson that Connor learns. 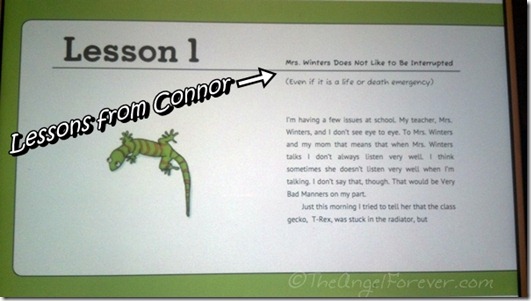 The illustrations and story really take you inside the mind of a child with Asperger’s. Two quotes from the book really hit me:

Sometimes it’s tiring having to explain myself.

The best thing about math is that it follows set rules that never change. Ever. If two times two equals four today it will equal four tomorrow.

I can only imagine this is something that my son may be feeling at times. I know I feel that way as the parent trying to be his advocate. People in the neuro-typical world often forget how literal our Aspies are and that changing rules of life confuse them and can make them more nervous.

Some of the items that I liked about this book:

Constructive criticism about the book:

TechyDad has also read the book and we are trying to find a time to share it with both of our boys. Lots of lessons to be learned from this and we can use it to help NHL identify as an Aspie and even JSL (5) to see more from his big brother’s point of view. I definitely recommend it to all children (and adults) because it does help to give you a perspective of life with Asperger’s. Oh and I just heard back via Twitter that Connor will have another adventure coming soon. Check out the Tweet from Jodi Carmichael. 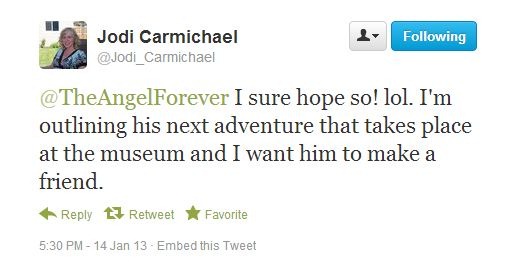 Have you read any books that capture the essence of children with special needs? I would love to know what they are. As always, please share what you have read recently. Be sure to link up to your book posts in the comments below. Include something you read on your own, with a child, or someone else. Tuesday Tales are all about spreading the love for books.

Disclosure: We purchased this book on Amazon to read because social media chatter intrigued us from Little Pickle Press. If you are a member of Amazon Prime it is also available via loan to read on the Kindle. An Amazon Affiliate link is included in this post for the book mentioned. I will receive a percentage of money for the sale should you opt to buy the book through that link. The Autism Awareness ribbon icon above was created by Melesse and comes from Wikimedia Commons.