These days, I often find myself thinking and worrying about my children. It is not about their health, it’s about their future. More specifically, I am growing more fearful of the lack of education they will receive as they proceed in their academic lives. As I have mentioned in the past, I have seen a dramatic difference in public education in just the last five years between my own two boys. I do NOT blame their teachers. They are also a victim of the teach to the test mentality that is being forced at them. If they want to keep their jobs, they must do what they are told. The chain of command is a lot higher in this respect and far above most on even the district level.

Looking back, I hardly remember tests as a child. Sure we took the Iowa exams, there was the New York State ELA in grade 4, and of course the Regents exams in high school. None of these exams scared me for life or left me afraid of following my dream of becoming an educator. I think I took a lot of things for granted at the time. I was given the ability to be a kid, to learn and be able to think outside of the box, and my teachers were able to be creative and teach us material that would NOT be on a test. 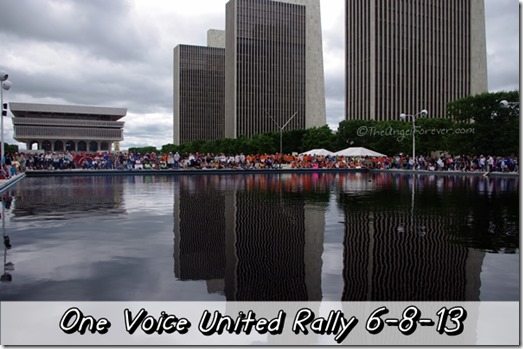 Fast forward to the One Voice United Rally at the Empire State Plaza on June 8. It was at that moment that I realized more had to be done. I did not want my children to lose out on what they should be learning and doing in their school. I no longer want to see the frustration on the faces of parents, children, and teachers. We need to stand up together and make our voices heard. We need to gather groups together to let New York State know that our children mean more than a number to us. Our children need to be educated so they can think freely and not conform to tests. The robotic nature of teaching to the tests has to end now.

One of the most inspiring speeches at the rally was from 18-year-old Nikhil Goyal. As I noted in my rally post from the other day:

18 year old Nikhil Goyal, a recent high school graduate from Syoset, New York talked to everyone at the rally. He is the author of One Size Does Not Fit All: A Student’s Assessment of School. He pointed to the need for students to join the fight for their education. Next year, he plans on rallying them to stand up for a world beyond No Child Left Behind and Race to the Top. In his words we need to stop the “drill, kill, bubble fill” generation of students.

Here is the video he posted of the speech. I urge you to take the time to see what a young man who is from the testing generation thinks of the system. Watch his passion to stop this and get the kids involved in the process.

Now I am more determined to keep going in the right direction to help my boys and other children. They deserve to be able to follow their dreams, be kids, and not have to worry about tests constantly invading their lives. Remember, this is not just happening in New York State, it is all over the United States. Look for groups in your area to get more information and join in the movement to take back public education for the future of our children.