The Innocent Victims of Common Core

It is hard to believe that December is almost over. It seems like only yesterday that I was bringing the boys back to school. On Friday afternoon as I walked with the boys back to the car, I pulled out my phone to capture a moment. NHL and JSL were walking back in their pajamas (a school fundraiser) and boots next to piles of snow from earlier in the week. They would have been holding hands, but a gingerbread house was being carefully balanced by the little kid. The reason I took the photo is it was a precious moment. The last time the kids will be walking back from school for December break together. This is the last year my boys will be together in school, assuming we keep them in public school. 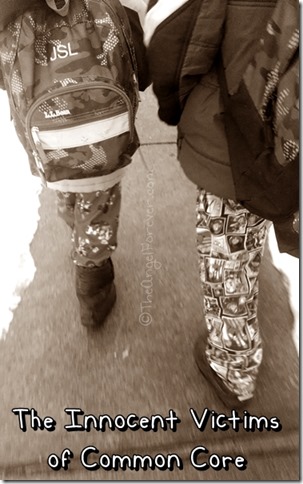 Yes, you read that last sentence right. Each day, my heart is pulled into another direction on what to do with the boys thanks the current problems that were brought on by the New York State  Department of Education. While I really do like our school, I do not feel that our district is stepping it up enough to fight NYSED. I have written a letter to the superintendent of our school district and never heard anything back from this individual or the dozen other people that I copied on it. Within the letter, I wrote about the love of learning being sucked from my children. While I had been active in a local advocacy group, I never got around to writing my own letter prior to this day.

What was the inspiration for my letter?

I wish I could say it was something fantastic, but it was not. That morning, my first grader cried not to go to school. He wanted to stay home and was trying everything not to leave the house. While he adores his teacher, it was not enough. Each and every step into school was a struggle. He fought me getting his shoes, going to the car, and then walking into school. I thought we were good when he walked into the cafeteria and kissed me goodbye. I was wrong, horribly wrong. As I was turning to walk with NHL to where he goes in the morning, JSL came running out and latched onto my side. He was in hysterics within seconds. Three months into the school year and my first grader had to be pried off of me by several people at school. I left the building numb, angry, and like a piece of my heart had been ripped out. My little boy who loved learning was not the same child that I was seeing in recent weeks. Where he used to write stories for fun, he never wanted to write and battled me when it came time for the small amount of homework sent home. EngageNY Math frustrated him because he did not know what to say in some areas other than the fact that he knew the answer to the math problem.

In addition to this, my oldest was now avoiding his math and cringed when he came home with items from engageNY. NHL is amazing at math and could likely be doing work well above grade level if given the opportunity. Unfortunately, like most of the children he is not good at learning simply one way and being forced to do things in a specific and very abstract manner. The new math curriculum that is riddled with problems (thanks to being rushed by NYSED) was pushing my child away from his love of math. My child who once shied away from reading and writing was now picking up a book to try to avoid his math homework. While the reading teacher in me was overjoyed that he was reading fiction, I was mortified with this latest development.

The day after my youngest was pulled from me, my phone showed a call coming in from the school nurse. My heart sank fearing the worst. The nurse was quick to let me know that everything was okay, but that my six year old son was sitting there complaining of chest pains. Yes, you read that right. My first grade son who has never had that complaint before was in the nurses office with chest pains. I was able to talk with JSL and we agreed that he should stay in school since his pulse was fine, he had no fever, and had stopped crying. An hour and a half later, another call from the nurse. This time JSL got back on the phone and I could hear him trying to catch his breath from crying. I asked him to explain his chest pain to me. He told me that his heart was going fast and felt like it was going to go out of his chest. He was clearly anxious about something, wanted me, and did not want to be in school. He stayed the rest of the day, but I worried about the next morning.

The Reality of Common Core Syndrome

My brain still hurts trying to process the fact that my six year old went to the nurse with chest pain. Sad to say, he was not alone. In several advocacy groups that week, parents noted the same thing happening to their elementary aged children. I will be blunt when I say that I think my youngest is trying to cope with the horrible reality that is Common Core implementation in New York State. He is a perfectionist, does not like to complain, and always wants to please the people around him. I think the stress caught up with him and he simply does not know how to express it in any other way. While this has not happened again, I still worry about JSL and his educational experience. I could home school. I am a teacher after all. It just breaks my heart to think of this concept because he used to love school and learning there. I am not blaming the teachers – they are simply trying to keep their jobs and do what they are told by the powers that be.

No matter what happens, I am still going to fight the fight to fix public schools. We must stop inBloom and the data mining of our schools. Politicians need to buck up and stop the insanity that is Commissioner John King, Chancellor Merryl Tisch, and Governor Andrew Cuomo. As the NYS Assembly gets ready to elect four Board of Regents Members, it is time to have major amounts of transparency from all individuals involved. Please take a few moments and listen to the words of Katie Zahedi, Ph.D. Principal of the Linden Avenue Middle School in the Red Hook Central School District. Her testimony will really make you think about what is happening.

So what is my plan? I am not entirely sure what it will be. I take things one day at at time. For now, I am sitting back and relaxing for a few days. The kids are home for two weeks, there will be no engageNY trauma, no NWEA exams, no state mandates, or tears. This week will be about educational play, being a kid, and regrouping.