Last night JSL was having some play time with Daddy before bed. NHL was already asleep and I was taking a shower. When I came out I went to my computer to check on something. Next thing I know JL was calling for JSL. The little guy was taking off across the living room. He quickly made it to the hallway. At this point I stuck my head over to say hello to him. He looked up at me, smiled and continued down the hall. As further in the hall he started to call for his big brother.

My heart just melted as the little guy was trying to get to their room to see NHL. He was quite upset when I scooped him up. JL took him from me for a diaper change before bed. While on the changing table he went bonzai. I was across the house and heard him screaming. Over and over he kept saying NHL’s name along with Big Bro. It was so sweet, but so sad at the same time. He would not stop yelling for NHL and crying hysterically. After the change JL took him to their bedroom so he could see NHL sleeping in his bed.

Thankfully seeing NHL and having some milk before bed seemed to calm him. He nursed a little, had his teeth brushed and then curled up and fell asleep.

This morning once NHL was awake we told him about what JSL had done. He quickly ran into our bed to see the little guy (the teething monster was in our bed for part of the night). Legs and arms were going crazy. He was chatting up a storm because he was SO happy to see NHL. NHL quickly gave him a big hug and kiss. JSL quickly looked over to me and smiled and then tackled NHL for a hug again.

Ah, nothing like sibling love. I will enjoy it because soon enough they will be tackling each other and yelling and screaming for other not so nice reasons. 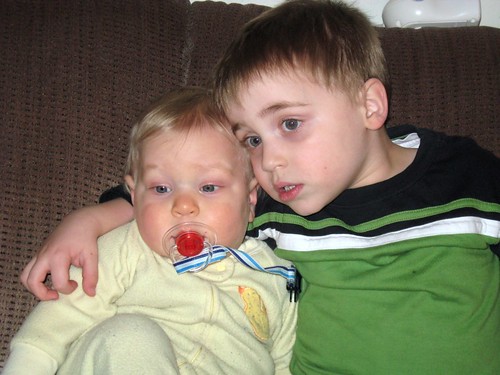