Yesterday morning NHL had his allergy testing done. They had to do five trays worth. I believe each tested for 6-10 different items (environmental, seasonal, animals, and food). My mother went with us to help with JSL so I could wrangle NHL. The nurse told us that she wanted to do the testing on NHL’s back. This allowed NHL to still have his hands free to color and do things to pass the 16 minute wait. He was NOT happy about this. Luckily the nurse allowed him to have an unfilled tray to test on his arm and all of us. He finally stopped fussing and allowed the nurse to do the test.

As mentioned yesterday (Houston he has allergies), several items were positively identified as allergen to NHL. Within minutes there were three that were very red and big. They were for trees, grass and I believe mold. Nothing else was too alarming that I remember. She did note that with testing on children there are often false negatives. So, the fact that these were SO drastic a reaction tells us that he is highly allergic to them. The nurse gave me a pack of information and told me to schedule a follow up appointment with the doctor. She also told me to go back to using allergy medicine until he tells us differently.  We go back on the 29th for the hearing test and the doctor appointment was on the 2nd, but is now the 7th. Silly Mommy forgot to sign up for swim lessons Monday. Thanks to this NHL was locked out of the Monday classes so we signed up for Friday.

So what does one do after allergy testing on a beautiful spring day when the trees that you are allergic to are blooming? 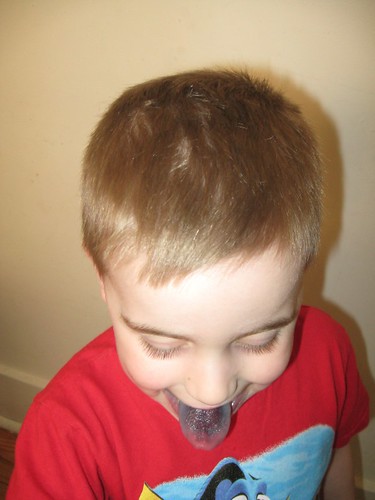 In our house they first eat a popsicle that turns their tongue shades of purple and then we go outside to expose ourself to the allergens while kicking a soccer ball around. 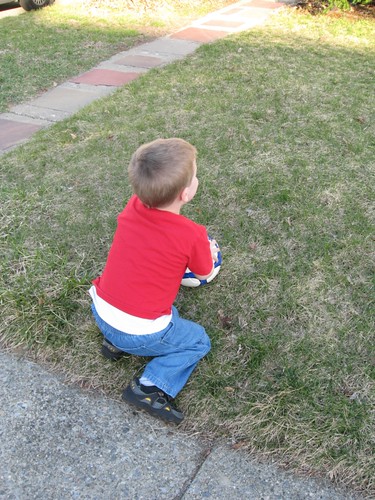 I know, bad Mommy! However he is a 4 year old and does need fresh air and exercise. So we said the heck with it he needs to do something fun and we went outside.

First NHL was trying to get a soccer ball past JL and JSL. 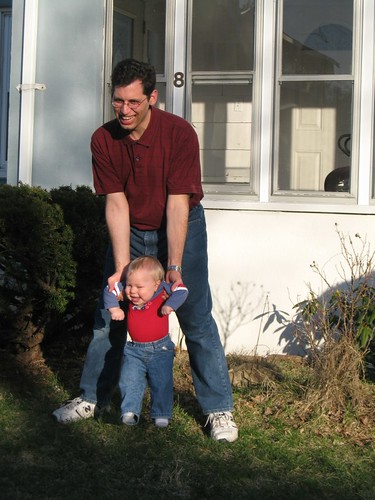 JSL was good at blocking shots. Thank goodness NHL listened and did not really kick the ball at his baby brother. Looking back this was probably not a great choice of activities for the little guy. 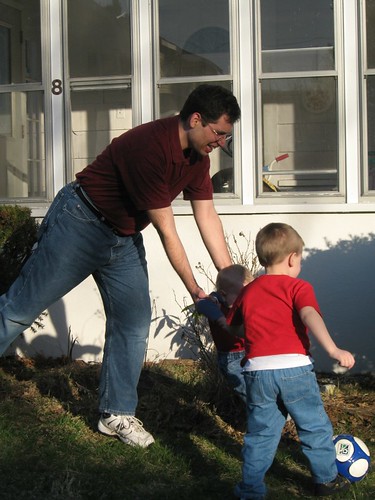 Then it was time for NHL to be the goalie and JL and JSL to attack. 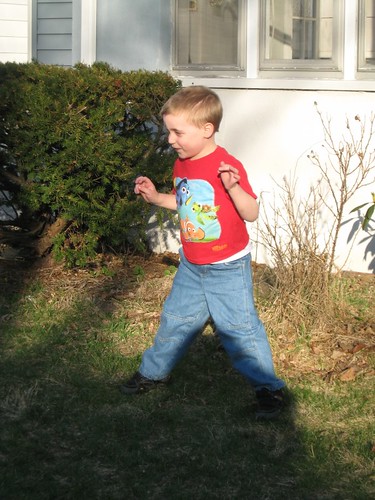 The little one was quite annoyed that he was not allowed to go down to play. He did not quite understand that he does not know how to walk on his own just yet. For now he had to be content with playing in Daddy’s arms. 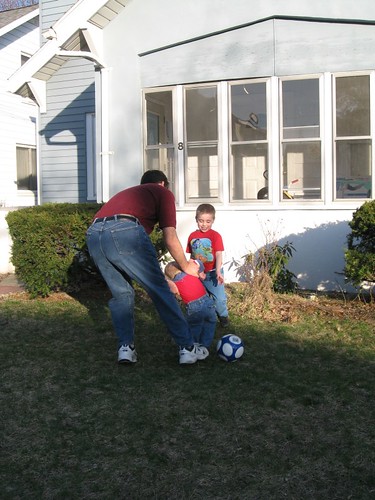 Of course he did manage to get into some trouble up high. He may look innocent, but nobody else is near the action to blame. 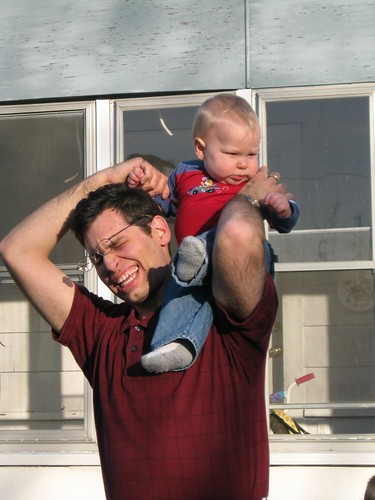 After a while JSL actually started to say "ball" and "kick". When he wanted the ball he said it and then as he was kicking he said that. It was too funny. 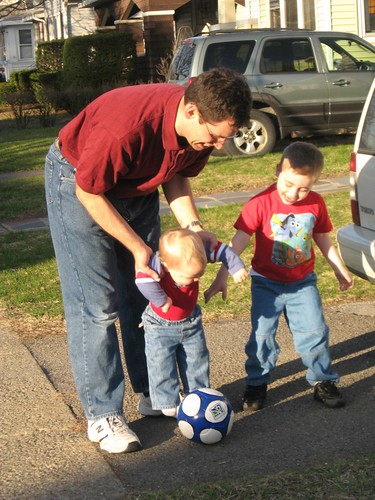 Of course then NHL thought it would be hilarious to take the ball and run away from his little brother. 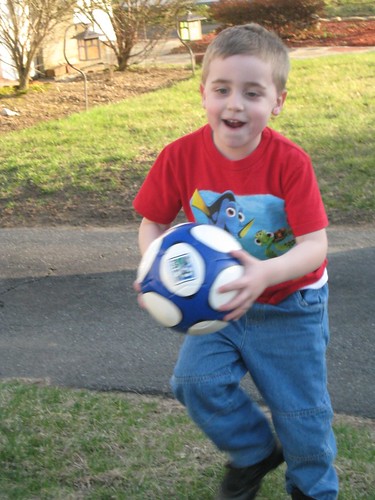 Although it was very bright outside, it was actually past NHL’s bedtime while we were outside. Good thing it was not a school night. This was a view above our house. 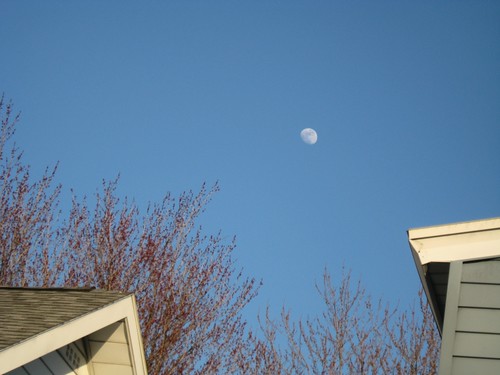 It was really nice to see JSL so happy. The poor kiddo just cut tooth #8. In addition to this we now see all four canine teeth coming in and the dentist told us at least three of the molars are moving. Check it out you can see the new tooth just cutting through. 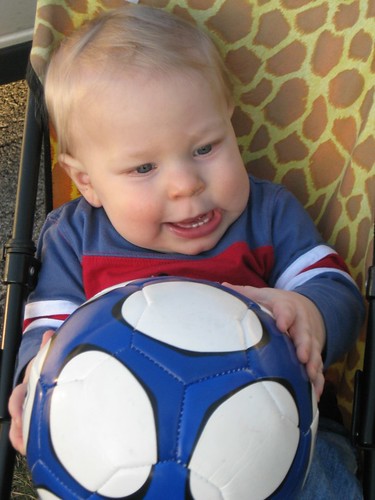 Of course he was not too happy when someone took the ball away. I was floored when he actually said "MINE" to JL. What are we in for if he already says that at 11 months old? 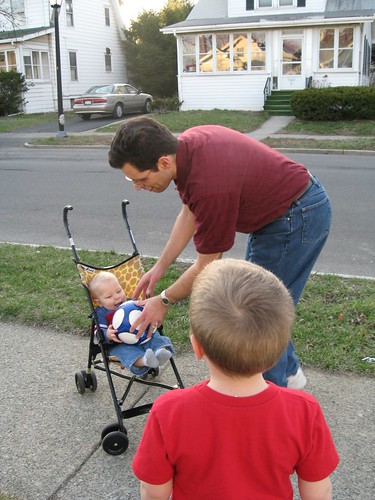 Here is what I mean.  He was baby yelling at JL for taking the ball. 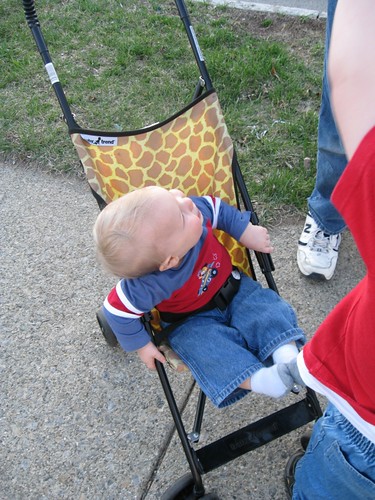 We all had a really nice evening outside. The boys played soccer, then NHL had fun with new bubbles and the little girl in the house next door. A wonderful evening, even if we ended up sneezing. 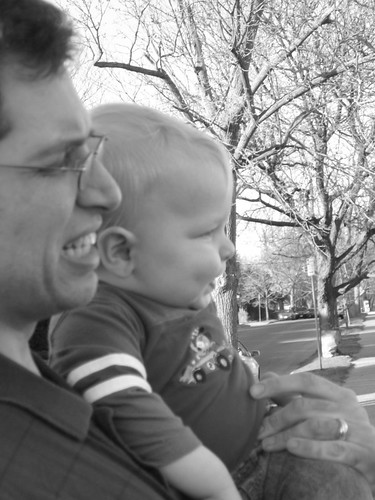 I love this photo of JL with JSL in his arms. I thought I would use it to wrap things up.