The following should have been my clue: 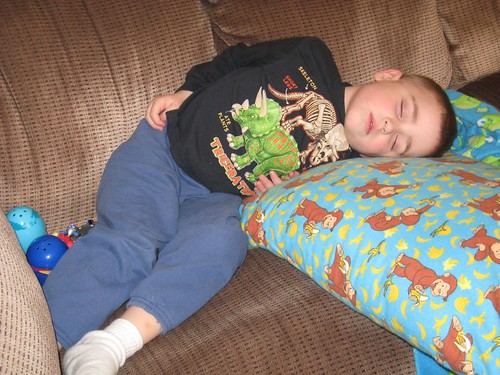 NHL never takes naps anymore. This is what JL and I found when we went to ask NHL a question while making dinner on Monday night. I had put on a movie for him to watch and minutes later it was very quiet. He went to get a pillow and snuggled up on the couch. The rest of us ate dinner and when NHL woke up he had something as well.

Fast forward to 9:40 when NHL woke up crying hysterically. For the first time in his four year life he told us his ear hurt. He was in agony and kept telling us. We took him to the couch and found no fever. Motrin was given to help the pain. I was concerned, but for once we may have lucked out. Earlier in the day I had called our doctor asking for a referral to a great allergist/ENT. I called to see when I could get an appointment while waiting. I just happened to bump into a cancellation for the next day – WAHOO! So all we had to do was keep NHL comfortable through the night and he was going to see the specialist in the morning.

It was a long night. NHL did not want to settle, but finally did in our bed. The next morning I took both of the boys to NHL’s allergist/ENT appointment. When Dr. K looked in his ear he yelped in pain. Sure enough infected again and on antibiotic. I believe it is the same ear that had fluid in it when he had the flu a few weeks back. We also talked about NHL’s congestion, snoring and other concerns about recurring ear infections. He told me that he would like to schedule NHL for an adnoid x-ray, allergy test, and hearing test.

We will go Monday for the x-ray where JL works. Originally we were going for the hearing and allergy test on the 25th. That was changed yesterday. They could not do the hearing test that day. That was changed to the 29th. Again I was SO lucky. I was able to score a cancellation yesterday to do the allergy test next Wednesday morning. The best thing, my mother will be home that day to go with us. I was dreading the 45 minute test since I know NHL is going to flip when he sees the panel coming at him.

With any luck next week we will have some answers and be able to help the poor little guy breathe a little better.

Thursday I took JSL for his first official dentist visit. Yes, babies now are supposed to head to the dentist too. Our group likes to see them when they are 1, JSL will be one May 14th. He has been to the office before when we had the cysts in his mouth at 6 weeks old. Thursday we met the only dentist in the group that we had not seen. Dr. J was amazing. She actually has a little girl that is 11 months old. JSL was great and let her really get a good look.

I was right tooth #8 is SO close to breaking through. This sucker has been very pesky for weeks now. In addition to this she showed me some other fun news. Sure enough the poor little guy has three, yes three molars moving on up. *sigh*  No wonder he has been so fussy lately. Dr. J said they may take a while to move and cut, but the pressure he has is definitely intense from all of this going on. She did not feel the eyeteeth yet, but those will come soon enough. In addition to this she said please to give him only Tylenol, not Motrin because you do not want an to stop the inflammation. Teeth move through an inflammatory process and by using Motrin you make it a longer time frame. So we will try to avoid it unless we need it for fever control.

Another comment she made floored me. Dr. J said to let him use his binky as much as needed. I had noticed in the last 2 weeks that JSL has become a binky addict. It all makes sense now. She said the binky sucking helps to relieve the pressure from the teething, so he wants to do that more. She told me not to worry and if we tried to take it away he would use his hands . . . and that is worse to try to take away later. So two of the three dentists in the group are pro-binky use if taken away at a certain age. Works for me.

As you can see the boys are keeping me busy, but they are so worth it. 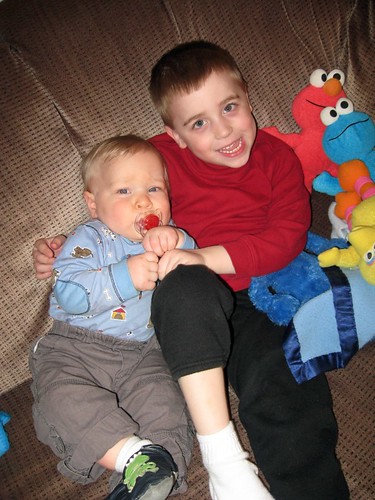 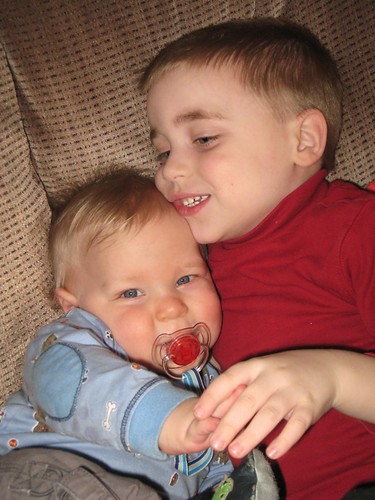 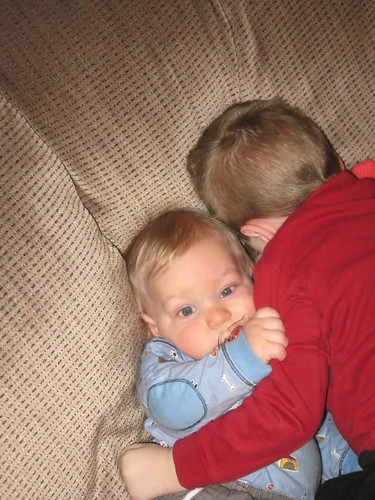