If they come, it will snow

Several weeks ago my brother, sister-in-law and niece were supposed to head here for an early Chanukah celebration. The weather had different plans, so they never made it here. That was the weekend that we had 18 inches of snow, went to the ER via ambulance, and had the party at our synagogue canceled.

Friday night everyone  made it into town safely before what was supposed to be a small snow storm on Saturday. Yesterday morning, we packed up the boys and our presents or Cousin S and brought them over to Nana and Papa’s house. The kids immediately started playing and had a wonderful time. Of course, the adults were planning strategies to get a photo of the three kids together. This has become an on going joke with us. The blooper photos are often more interesting than the so called "good’ photo that makes it from the group shoot.

Here is one of the three kids that was not too bad. 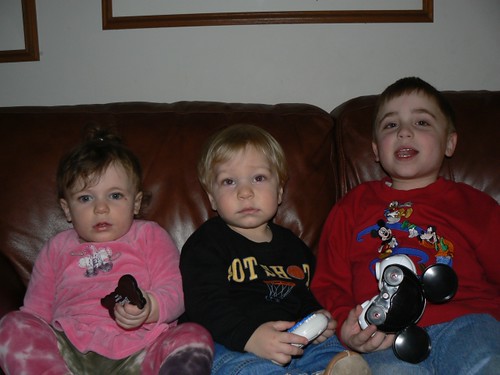 Everyone loved the David’s Cookies prize that I won. A lot of the ones on top of the container were gone long before dinner time. I was a good girl and snacked on tomatoes, a few pretzels, and hummus. I was saving my points for later in the day.

We watched to see if/when the snow would finally show up. Just as we sat down to eat dinner the snow started to come down. We ate dinner, and then quickly had some cookies and brownies and packed up the boys. By the time we went outside there was probably 1-2 inches out, but the roads were really slick. This morning there was probably 6-8 inches outside of our house. Thanks to this we opted to keep NHL home from Hebrew School. It is not worth the risk of going there for the few hours in this weather. JL just got my car out from under all of the snow and we are going back to Nana and Papa’s house. My parents live very close to us, so it should be doable.

« Timing is everything
The sickies jinx »