My heart stops every time I hear a giant thud. JSL is on the move constantly. He is running and climbing all over the place. Last night, I was in the kitchen making green dip for NHL’s kindergarten Green Food Festival. JL and NHL were on the couch for nebulizer time. JSL had been watching me and ran off through the dining room to the living room. All of the sudden we I heard a giant crash. My heart went right to my throat and I ran into the dining room.

In the dining room I found JSL face down screaming and clutching his mouth on the hardwood floor. While running he must have lost his footing and went down hard. As soon as I picked him up he continued to hold his mouth/chin area.

JL rushed over and by this point the little guy’s mouth was filling with blood quickly. I immediately thought the worst. Sure, I know that mouths are vascular and bleed badly, but I could not assess the situation. JSL was screaming, would not open his mouth and blood was now getting onto his shirt.

I grabbed the phone and called Nana asking her to please come over. At this point I did not know if JSL had a tooth bent, if he cut his tongue or what. Nana said she was on her way.

We took JSL into the kitchen and tried to clean his mouth to get a look. I immediately saw that his lip was now 2-3 times the normal size on the bottom. Then we pulled his lip down and saw a huge gash on the inside. By the time Nana arrived he was putting some ice on his lip and she was able to get into his mouth for a better look. His teeth looked fine and did not seem to wiggle. We gave him Motrin and opted to skip brushing teeth since we did not want to disturb the clot on his lip.

Thankfully, JSL slept very well last night. This morning the swelling in his lip looks much better. Later I plan on tackling him to check his teeth. Not sure if I should call the dentist or not. At this point there isn’t much that they can no anyway. Still I worry, I guess that is just me being a mom. Here is a cute photo from Sunday of my little guy before he looked like he got into a fight. 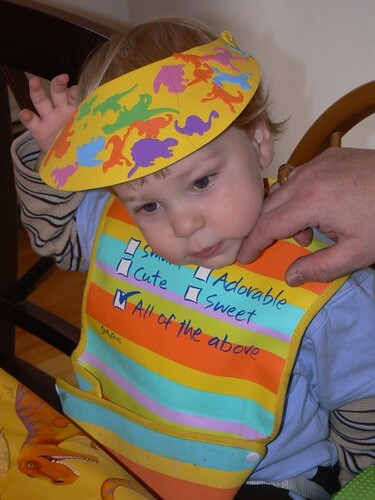 So does anyone know where I can get some toddler sized hockey goalie gear, including a helmet, for JSL? Seriously it is that or putting him inside a bubble!