Yes, you read the subject line correct. Life here at Chez Angel has been turned upside down since early Saturday evening. When we left the ER Saturday night with no answers and over 24 hours to go before seeing our doctor I was beyond nervous. As the parent of two children that have had febrile seizures, I know that the following 48 hours are the most common for a repeat.

NHL had his febrile seizure when he was 11 months old and is now almost six years old. Finally getting out of the danger zone. When I was little I had three, but none were back-to-back. JL had two as a child and to my knowledge both were seperated by time.

JSL apparently had to be different.

Everything from Sunday night is a blur. I went to sit in bed with my computer and got tired, so I turned off the light. The little guy was next to me to make it easier to medicate him during the night. At 10:30 we opted to let him sleep, rather than wake him for the fever reducers. This decision would soon come to bite us in the you know what.

The next thing I remember is it being midnight and SCREAMING for JL to come quickly. I do not even recall waking up. I just remember pulling JSL to me as he was once again rigid, thrashing/shaking and frothing from the mouth.

After a few seconds (not that I actually timed it), he was done with the seizure. He was burning up. I got Motrin for him and called my parents to come over. I thought that we would be going to the hospital for sure and needed someone to be with NHL. Next I called the doctor at about 12:30 and waited to hear from him. He called back after everyone else was here. He did not want us to go to the ER. Instead our main goal was to give JSL fever reducing medications every two hours the rest of the night.

We did just that and brought him to see the doctor yesterday morning. We believe that he has a sinus infection and may have a hidden ear infection. JSL is now on an antibiotic to try to kick this in the butt. Of course the fever is still hanging in there. Every two hours we are dosing up one fever reducer or another. Here is the little guy after he returned home from seeing the doctor. 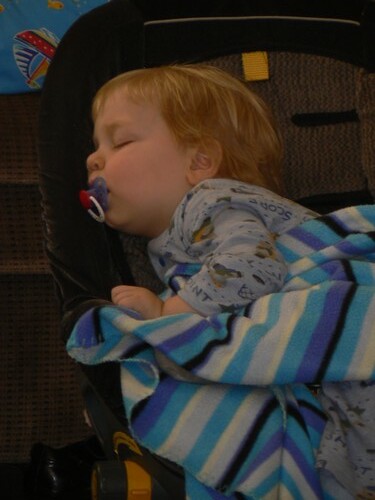 To add to the excite, NHL has been on a steroid for his breathing troubles the last three days. He finishes this up today. Then yesterday, his allergist called back with more detailed results of his adenoid/sinus x-rays from Wednesday. The adenoids still look great, but he did not like the way the sinuses looked. Given that he was still very stuffy and actively blowing mucus out of his nose, he is now on an antibiotic as well.

This is medicine chart central and our own personal mini pharmacy. 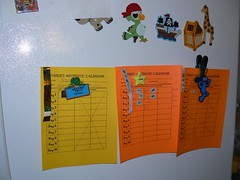 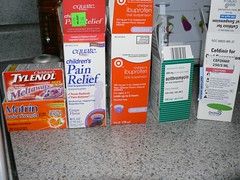 This morning JSL’s temperature started to go way up again. So, it will be another day of fever reducers every two hours and the second dose of antibiotic later this afternoon. With any luck we can kick this thing and stop worrying about more nightmare moments. Of course you know that I will forever worry given how quickly these last two febrile seizures came out of no where.