While in the middle of three giant loads of laundry and packing it as everything was dried, I suddenly remembered  something. We never went shoe shopping this weekend. Sure we each had a pair of sneakers to take along on our Disney World trip, but that was about it for hubby and me. Nothing else really qualified as a comfortable walking shoe.

So, I left the laundry behind to be finished later and we went to the mall. Our first stop was to Pay Less Shoes to get some new sneakers for the boys. Each of them got a new pair of velcro Smart Fit shoes for quick and easy on and off. Next, we tried the LLBean store where JL and I tried on some Keens. They did not have the right size for JL in the ones he liked. When I tried mine on I seemed to be right in the middle of a size and was not spending SO much money on something that was not quite right. After that we tried another shoe store in the mall. I tried on a pair of Teva per my father’s suggestion. Both of my parents have owned them, along with countless friends over the years. I put them on and oh my were they comfortable. Of course, I did not want to rush into things. I waited for JL to try on a pair of sandals and then we went to a department store that had a big shoe sale.

For some reason said store did not have many shoes for women. Everything was dressy, but not casual and comfortable for walking. JL quickly found a bunch of shoes to try on. He even tried on Crocs that he liked a lot. In the end he picked out a pair of sandals that were closesd toed and very different than anything he has ever had.

When we were done there I went back to the shoe store and bit the bullet. I finally bought myself my own pair of Teva shoes. Here they are: 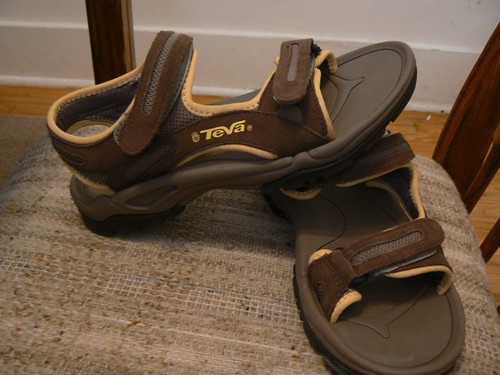 Last night I put them on for a power walk to help break them in. I walked for 38 minutes while watching Pushing Daisies on the DVR. In 38 minutes I walked 4,065 steps. Love my new pedometer and the Teva shoes were VERY comfortable! Here is a view of all of the shoes that we bought while shopping yesterday: 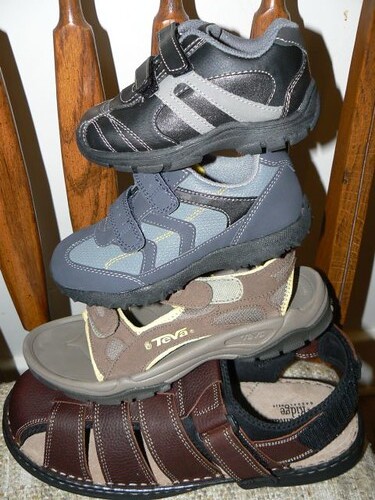 When all was said and done we had accomplished our mission. In fact, this weekend we managed to get a lot done. Almost all of our clothes for Disney World are washed and packed, shoes bought, haircuts for all of us (yes I had mine significantly chopped), traveler’s checks purchased, lists made and brain working at warp speed!