It’s hard to believe, but I never went to see The Greatest Show on Earth until I was almost in college. I still remember feeling like a kid as I went into the arena with my Aunt S and two cousins to see the show. We arrived early to see the pre-show and everything was amazing. Each performance topped the next. The clowns made everyone laugh and we all had an amazing time. Last year the Ringling Bros. and Barnum & Bailey Circus was visiting, but we were not able to go. Sadly, they were in our area just a day or two before we left for our week long vacation at Walt Disney World. We would have loved to go, but it was just too much. This year we have already promised the kids and ourselves that we will be there if they come to our arena.

Once again Ringling Bros. and Barnum & Baily Circus is gearing up for another season of new shows that hopefully will be visiting an area near you. To make it an even better deal, Mom Central is offering discount codes to select locations!

* Not valid on Circus CelebritySM, Front Row or VIP seats and may not be combined with other offers including special Opening Night pricing.  Other fees may apply.

The above offers are good in the following cities: 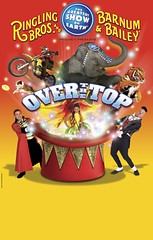 Ringling Bros. and Barnum & Bailey® Presents Over The Top, an all-new live entertainment extravaganza featuring the ultimate tug of war between Ringmaster Chuck Wagner and clown eccentric Tom Dougherty over a magical top hat that controls the circus. When the Ringmaster dons the hat he conjures stupendous spectacles for his circus, like the stunt riding Royal Cossack Cavalry while the clown uses the hat to summon silly and whimsical acts for his circus, such as a cavalry of goats riding on ponies in a Barnyard Bonanza.  They continue to top one another until the Ringmaster and clown realize that the magic of the circus is not in the hat but in the hearts of everyone. The show culminates in an amazing display of gigantic glowing rainforest flowers surrounding Chinese acrobats swinging on vines and propelling through the air. Over the Top is two circuses in one providing excitement for the whole family.

Audiences will see nearly 100 animals including flying dogs, Asian elephants that skip, hop, and groove, miniature horses, llamas, pigs, and even a performing porcupine. In a daring feat, the courageous Daniel Raffo stands eye to eye with a pack of powerful Bengal tigers. Circus celebrities help rev-up the motorcycle madness featuring one cycle on a high wire and seven speeding riders in a Globe of Steel. Extraordinary aerial acts fill the arena sky with a rare double-decker trapeze and the Bombastic Bouncers who combine gigantic inner tubes and awe-inspiring acrobatics in a high-energy performance never before seen in America. And with the audience’s participation, this circus really goes Over The Top 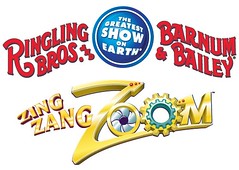 Magical Zingmaster Alex and his assistant, the alluring Levitytia, lead audiences through a kaleidoscope of color and imagery revealing extraordinary worlds of fantasy, flight and phenomena that celebrates the uplifting spirit of the circus and wards off a cynical Mr. Gravity and his team of "heavies" who try to bring everyone down.

Be mesmerized when a four-ton elephant disappears before your eyes, and a gravity-inducing nemesis transforms across species into a ferocious tiger.  Stand in awe as a dazzling trapeze artist performs a perilous, anatomically unimaginable one-arm speed-spin high atop the arena floor, and two formidable, female human cannonballs are blasted through the air in a daring, awe-inspiring display of bravery.  Become electrified as the dangerous double wheel of steel, the gasp-inducing high wire and soaring gigantic swings defy both gravity and logic.

Fun-filled magic merges with traditional circus arts to create a world of infinite possibilities where apprentice illusionists levitate their parents with a wave of a wand, and audience spirits keep rising as the high flying circus is (literally) turned upside down.  Perhaps the most magical of all, watch in amazement as an incomparable array of exotic animals including a herd of majestic Asian elephants, magnificent Bengal tigers and elegant Arabian and Friesian horses join forces with our human performers to create an experience that will surprise and delight Children of All Ages, rendering us speechless and reminding us that the magic of The Greatest Show On Earth® lives forever in our hearts and imaginations.

To learn more about Ringling Bros and Barnum & Bailey shows touring the country this year and to find shows in your area, visit the Ringling website.  Do not forget to use the special discount code when purchasing tickets online. I can not wait to see Zing Zang Zoom with my family when it travels here in the spring of 2010!

Disclosure: I wrote this review while participating in a blog campaign by Mom Central on behalf of Feld Entertainment. Mom Central sent me a gift card to thank me for taking the time to participate.