My homage to the Doof

Some of you may have seen the title of my post and had no clue what it means. Guess you do not recognize the crew below. 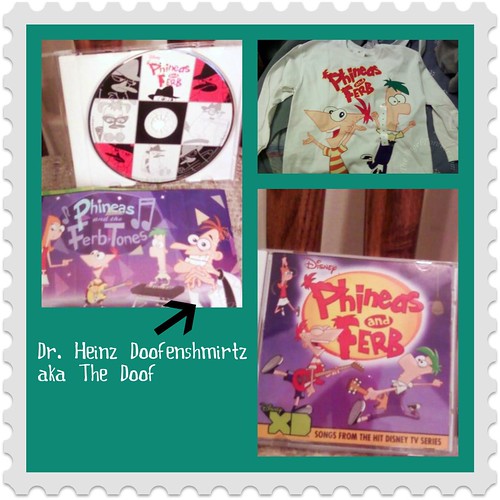 The other day, a childhood friend left a message on Facebook to see if anyone would know what he was talking about. His wife thought it was pretty obscure and nobody would recognize it. The status message simply stated, "My name if Doof and you’ll do what I say!"

I vaguely recalled it, but said it outloud to TechyDad expecting a reply from him. Before I knew it, NHL said the following, "My name is Doof and you’ll do what I say. Woot! Woot!"  He kept on going singing the entire song that Dr. Doofenshmirtz sings from Phineas and Ferb.

While visiting my mother today, I had a weak parenting moment. I channeled my inner Dr. Doofenshmirtz and said the following to JSL:

Me: My name is Mama and you’ll do what I say. Woot! Woot!

Without missing a beat, the little guy replied back to me.

JSL: My name is JSL pup-pup you do whah I. Woot! Woot!

I immediately wanted to be able to share this with hubby since it had backfired, but in a really cute way. Here is the little guy doing it several more times with me.

The lesson learned is that this may have worked for Doof, but it does not work with 2 and 6 year old children!

« Hockey on Christmas
My little Bob the Monsters Inc. Builder »