Something I have learned as a mother is never to question the way a child sleeps. If they appear comfortable and are sleeping without trouble just leave them alone. This rule works not only when they are in their beds, but also napping in the car, asleep in a stroller or any other odd location that could occur with children.

Case in point: The other day, TechyDad went in to check on the boys while we were still up. He told me to stop by and look. Check out NHL and how nicely he was sleeping. Please ignore Diego who appears to still be awake in this shot. 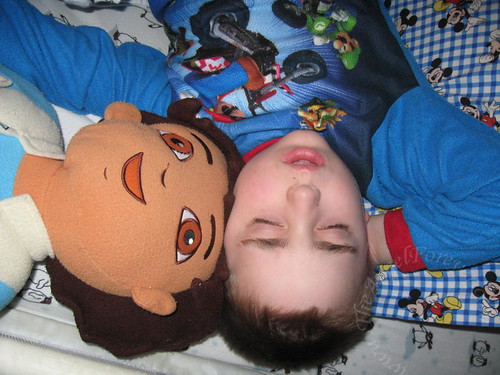 NHL was definitely a peacefully sleeping six year old. He really was quite happy. Yet, at the same time I questioned whether or not to move him some. Here is a little further out to understand why: 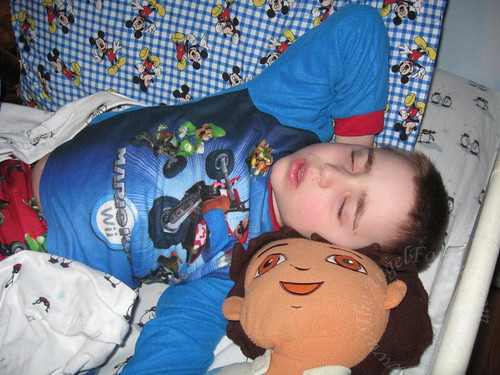 Now you can see that Diego is actually on the side of his bed near the rail. NHL does not have his head on his Mickey Mouse pillow and well check below to see where the rest of his body is: 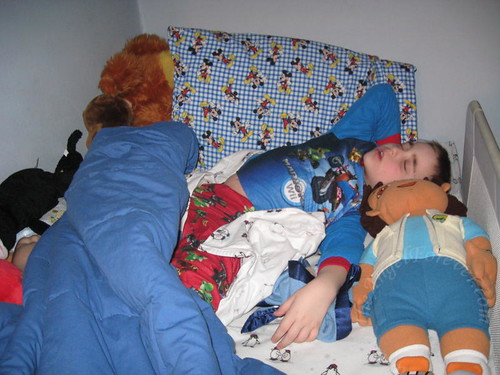 Yikes! While not the most unusual position that NHL has ever slept in, this was up there. In the end, I opted to leave him alone. I was afraid to wake or bother him. Thank goodness since NHL really needed the sleep. A few hours later, he woke up complaining of a sore throat. He got some water and went back to sleep. He was up again for good at 5:30. The poor kiddo was really stuffed up. Looking back at the photos, it is obvious that he was breathing through his mouth.

Thanks to these photos, I learned a few lessons. #1 Leave a child alone to sleep no matter how you think that would make your body ache. Kids are great and spring back until they hit their 30’s like us and realize they are no longer children. #2 Taking lots of photos helps being a parent investigator. These pictures made me realize that NHL was definitely mouth breathing from whatever his body is fighting off. 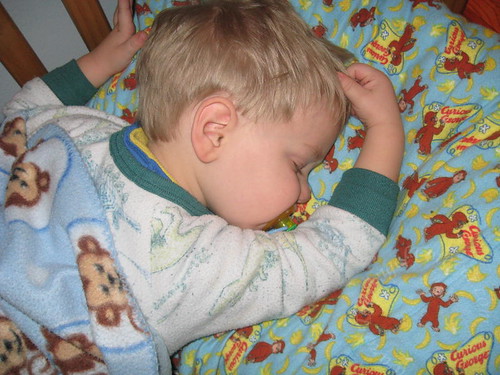 Now let us just hope that JSL, who shares a room keeps sleeping peacefully and does not join the sick club.

So do you follow the rule of letting a child sleep? Just wondering what other people do.