Being interviewed for television

Today is the day that I will be coming completely out of my bloggy shell!  *gulp*  Why you ask? I suppose it begins with the fact that last Wednesday, this was in my living room: 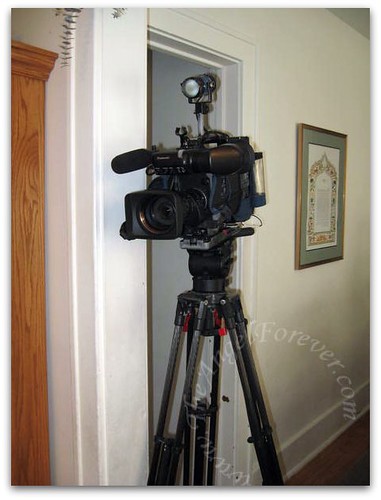 To those of you here from the WNYT broadcast, or their website, welcome! I wanted to take some time to explain to my readers about the events that happened the last few weeks leading up to the segment you saw.

As I have written in the past, I was hesitant to come out of my bloggy shell. New opportunities have presented themselves and I think I am pretty much ready. For three years, I never mentioned my name on my blog. You still will not find it specifically mentioned. When I went to the Disney Social Media Moms Celebration in February, I came partially out of my shell handing out my bloggy business cards to people. My name was right there for all of my new friends to see. This was my first step.

Then, when we came back from Disney, Christina (CutestKidEver) and I started some larger projects together. These projects would focus their attention on local items and a blog conference to be hosted in our area. When I asked people about their interest, I finally revealed that I was in fact living in New York State. Not that it was a secret, I just did not specifically mention it on any posts up to this point. Locals certainly would know that the Six Flags park that I often wrote about was The Great Escape in Lake George, NY.

About three weeks ago, I received a message from AlbanyMommy to giver her a call. When I got in touch, she wanted to know if I was interested in being interviewed by a local television reporter. I was very intrigued and agreed to talk with the reporter. I immediately knew the name of the distinguished member of the local media and called her later that evening. It was soon after she had gotten off the air, so I expected to get voice mail. Much to my surprise, Elaine Houston answered the phone. 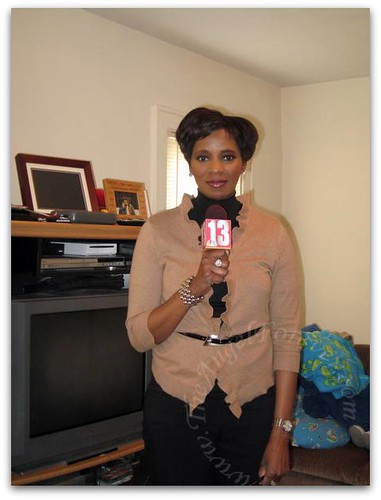 We talked for a little while. I was asked how long I had been blogging, why I started to blog and a few other items. During the brief chat I mentioned blogging conferences. This was something new to Elaine. She was intrigued. She asked if I could be interviewed the following week, but our schedules did not work. So we set a tentative date and I told her I would get back to her. The only item I was not sure about….the camera and Elaine would be coming to MY house. Yikes!

A week later, while talking to Elaine Houston, I was getting some cold feet. I will admit, I was still not too sure about someone coming into my house. Sure I post photos on my blog, but that is just different. At one point, she said something about other blogging friends. When I got off the phone, I had an idea. What if I had my partner in crime come to be intereviewed as well? She could interview both of us and see how a friendship was born from blogging and social media. I pitched the idea to Elaine Houston and she agreed.

Last Wednesday, Elaine Houston and Michael (camera operator) came to my house for the interview. It was surreal seeing a large television video camera in my house. We immediately got to work doing interviews. I was up first. I was seated on my couch and Elaine Houston sat across the way on the loveseat. Meanwhile, Michael had all of the lights on (camera included) and it was pointed at me. I was told to look right at Elaine and just chat with her.

The interview was probably 10 minutes of questions about different subjects. They were mainly about why I blogged, how I started, what we do at conferences and what the future of blogging holds for me. To all local people that find out you are going to be interviewed by WNYT reporter Elaine Houston – consider yourself lucky. Elaine really puts you at ease. After a few seconds, you forget that the camera is there. I was able to focus on Elaine’s question, smile and interviewing style. Next, the camera went to another angle to get some shots and then Christina went to the couch to be interviewed.

What Elaine Houston may or may not be aware of, the two of us were Live Tweeting the events! Christina and I blogged, but we were sending out a lot of Tweets during the time she was here. When Christina was done being interviewed, we were asked to get some camera shots of us blogging at my dining room table. We did this and then they wanted to see some photos from Disney Social Media Celebration. I cued up some on my blog and described a few of the events that I had already blogged about. 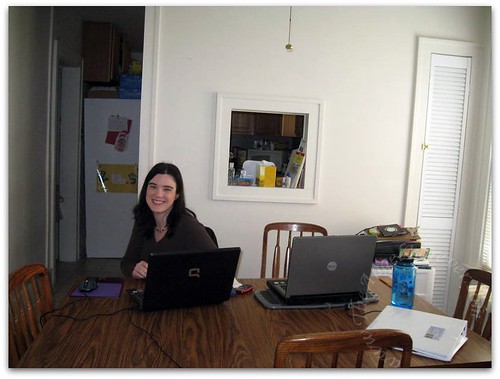 When this was over, Elaine Houston noticed that I had my camera out. I told her that as a blogger I always have my camera at the ready. It was not everyday that a camera and reporter are in your living room. I asked if I could take some photos of them to use on a future blog post. They both laughed at the tables turning a bit, but were gracious and agreed.

I would have to say the only awkward moment was when I was asked to do something around my house for the camera to see be doing. My house was pretty clean and I had no clue what to do. Thank goodness a stack of blankets that had been on the couch needed to be put back up and my son had a few Winnie the Pooh characters scattered on the floor. Admission – this was painful to do and I really hope it is NOT in the segment. 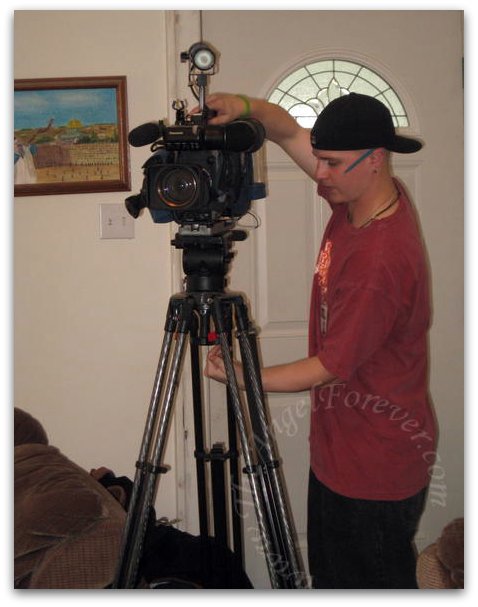 I know that I am excited to see how all of the interviews and other items are meshed into the final product that will be seen tonight on WNYT at 5:30. So to anyone here via WNYT welcome! Please sit back, click around and get to know me and The Angel Forever. More local item links will be coming soon as I finally fess up to the names of places that I go to with my family. Stay tuned as a lot more exciting things are to come as I continue my bloggy adventure.

A big thank you to Elaine Houston and Michael. The two of you were amazing to work with and kept us at ease. Elaine, your interviewing style is even more impressive in person. I also loved learning about you and seeing your great sense of humor. I look forward to seeing your future endeavors and appreciate all that you are doing to spread the word about what women in the Capital District are doing (Today’s Women). One day, I hope to work with you again. My dream as a teacher was always to have you in my classroom because you do so much for the world of education. Michael, just an FYI: The Dinner Impossible that we were part of during our conference will be aired the first week of June.