Time to stop and think

It has been a rough week around here. Feeling angry and hurt, like the system failed my family, would be understatement of the century. Right now, I am just not ready to explain more than that. I am still trying to figure items out and see if we have any legal recourse to help with part of the situation. The good news is nobody is hurt, things will get better and answers are finally coming our way.

Yesterday, I woke up with a migraine. It was just a sign of the way the day was going. I had not slept too well the night before after reading a bit too much about bedbugs and reports of them all over NYC, including the hotel that will host BlogHer this coming week. Like the thought of lice, bedbugs make me itch and creep me out.

I finally got dressed in the afternoon and decided to take JSL with me. I figured we would walk (read me push him in the stroller) over to Nana and Papa’s house to get out. Plus, it was a chance to have some of their caffeine rich Keurig coffee. We walked there in about 18 minutes (.89 miles) and stayed for a little while. Poor JSL fell running to get a toy and bit his lip and got a bump on his chin. He was super snuggly from that point on.

When it was time to leave, it looked like rain. TechyDad and NHL came to pick us up with the carseat for JSL. Of course, JSL insisted that we walk back with his stroller and not ride. NHL immediately wanted to go. So there I was walking back with both of the boys. It was a nice walk. NHL ran ahead of us and JSL was singing his Wiggles and Winne the Pooh Songs. I had to stop and take a photo 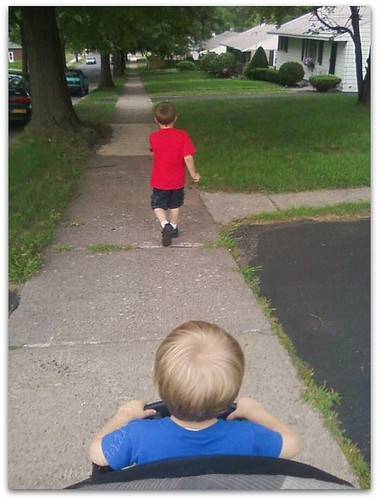 Here were two of my boys, happy and carefree. For just a few minutes, even my worries were gone and everything was good in our little world. Although it did not last long, I enjoyed it and only wished that TechyDad had been with us. Instead, he stayed behind waiting to leave in case the sky decided to dump rain on us.

Thank you JL. Thank you for always being there for all of us and not being upset when something silly like everyone wanting to walk happens. Next time, let’s make it a family adventure together.