Heat is a Wonderful Thing

This morning, when I woke up and got out of bed I was freezing. Nothing too alarming really, we keep the house at 63 degrees, and we just got 13 inches of snow yesterday. Here you can see what it looked like before it stopped:

It’s not rocket science, we know it’s cold. When I got NHL up, he went to the couch and complained he was freezing. This is where a red alert should have happened. NHL is never cold unless he is sick, and (*KNOCK ON WOOD*) he is not sick yet. I went over to the thermostat and clicked it up two degrees and walked away. 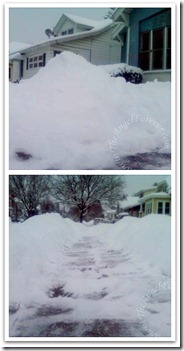 Did you notice I forgot to do something?

About an hour later I was shivering with JSL in my room. He just woke up and I had to take his temperature. I went to check the heat since the radiators were ice cold.

55 degrees! Uh, Houston we have a problem! I called TechyDad in a panic. I went downstairs and did not see the pilot light on. He talked to his boss, got permission to come home and help me.

After several attempts to keep the pilot lit, it failed horribly. TechyDad went to Home Depot to pick up a thermal coupler. He had replaced this a little over a year ago, so we tried that. It seemed to work at first, but just before heading back to work he went down to check. Nada was lit again. No heat coming out. *sigh* 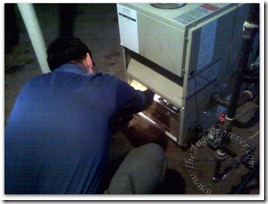 At this point, my father came to my rescue and called a Heating/Plumbing place to call me back. They heard we were at 55 degrees with a sick kid and came in less than two hours. To make a long story short – we have heat! The gentleman here  also realized the idiots that put in our system (contractor hired them – not us) when we moved in had something that was making us waste money. He fixed that and we handed over a check with heat flowing out of our radiators.

Immediately afterward, I called S. C. BASS Plumbing to thank them for coming so quickly. Then I made an appointment to have our heating system cleaned.

So excuse me now – I am off to enjoy something I took for granted while taking care of my sick little guy.