As I wrote a few weeks ago, Harry Potter grew up along with me. As Harry went through Hogwarts, I graduated from earned two college degrees, got married, became a teacher, had two children, and the list goes on. I started the series while I was still in college getting my teaching degree. Then, I read the fourth book as my water broke for NHL’s arrival in August 2003. I still remember devouring the last book as I nursed JSL in the summer of 2007. So many memories.

One may have assumed that I rushed out to see all of the movies when they were released. That would be a bad assumption. While I have seen all seven of the previous movies, I had never seen any of them before they were released on DVD. I am happy to report that I finally broke that this past weekend. TechyDad and I were able to go on a movie date while Nana and Papa watched the kids. We went to witness the final chapter of this saga on the big screen. 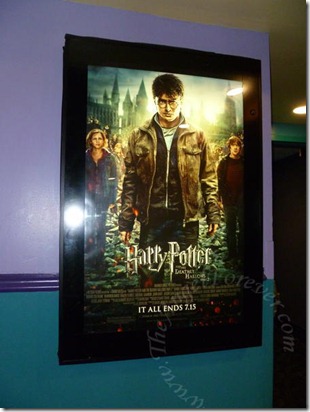 I was excited and nervous about seeing this film. Would it live up to my expectations from the last book? Would I resent Hollywood for the way they represented some very intense moments? Would I cry like a baby? So many things were running through my mind as the movie started.

In the end, I loved the movie. It lived up to my expectations and more. It was powerful, made me feel like I was in their world, and the acting fantastic. I will also admit that I fell more in love with the actor that plays Severus Snape.

*Gasp*  I know – I just admitted I like Snape. I am completely fascinated with Alan Rickman’s portrayal of the professor that everyone loves to hate. I also find it interesting that Lord Voldemort was played by Ralph Fiennes, who played one of the horrid Nazi’s in the Academy Award winning Schindler’s List. While looking around online, I found this History of Snape video and adore it. I had chills watching this with interviews from many actors in Harry Potter actors and J.K. Rowling. Enjoy!

Although seeing this final movie was sad, it helped me to close this chapter of my Harry Potter life. Of course, now I am even more excited to share the wonderful world of Harry Potter with my boys as they grow up. NHL has seen the first movie and is now quite intrigued with the series. I think we may do a read aloud of the books soon. TechyDad wrote about NHL confusing something from Harry Potter and the world of the Smurfs – really he did.

Please feel free to share your favorite Harry Potter moment from the past, present, or possibly future. I would love to hear them.

Disclosure: For the record, I did have tears in my eyes for several parts of the movie. Highly recommend seeing this movie and bringing tissues or a good sleeve to wipe your eyes.