As an adult living in the northeast, snow is something that we have to deal with during the winter months. This winter has been mild, but it does not typically last forever.  Although I am not a fan of the beautiful white that falls to the ground now, I was as a child. There are so many memories of building snow forts and snowmen with my friends and family. 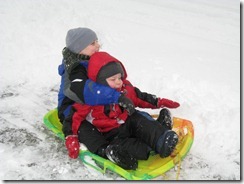 These days, my best snow memories have been watching my boys explore and learn about snow play. When JSL went out to play in the snow for the first time as a walker, my camera was there to capture the moment. The best part, I caught his first few steps on video when he learned that snow is slippery. That first winter as a toddler was rough for JSL. He wanted to play and wander in the snow like his big brother, but he could not keep up. Eventually, he got to the point that standing out in the cold did not interest him.

That changed when JSL turned two. As a fast moving and grooving two year old, he was able to safely maneuver in the snow. A year seemed to help him to figure out how to move around within the confinements of his snow pants. He also learned where to put his fingers inside mittens to be able to use items while building in the snow. Yes, experience and time to become familiar with this environment made a drastic difference. 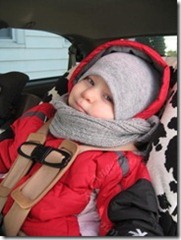 JSL also learned how important it is to stay warm. He would not fight us when putting on boots, a hat, mittens, scarf, snow pants, and his winter coat. Since being a helper is important to toddlers, we bought  him a little shovel. The proud look on his face as he went to help clear off the snow was priceless. Of course, I think his favorite part was building a snowman with my husband and older son, and chanting “faster” and “more” while riding in a sleigh.

The best advice I have is to have fun and be a kid again. Take some time away from shoveling to make snow angels, build a snowman, and play in the snow with your toddlers. These magical moments will not last forever and are fun to look back on.

I would also suggest finding some mittens that little fingers can move in, a small kid shovel, sled, and a scarf to protect faces (hard to find for little ones – I knit them for my kids).  In addition to this, bring a camera and snap away or take videos to show your children later on.

What types of things do your younger children like to do when they brave the cold weather to play in the snow?

Disclosure: This post was previously published on a project I worked on. The text is mostly the same, but I placed additional photos and the question at the end for my blog.